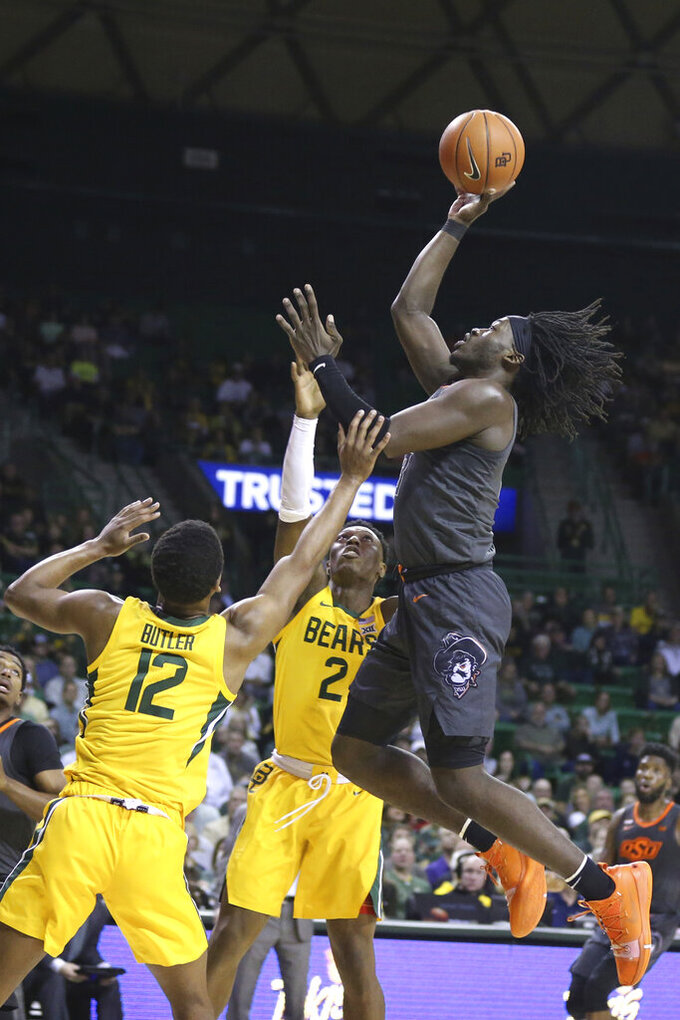 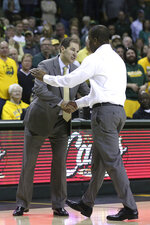 WACO, Texas (AP) — MaCio Teague felt like he was in the quiet of a practice gym when he stood at the free throw line for No. 1 Baylor in the closing seconds. And he kept making them.

Teague's 24 points included six consecutive free throws in the final 14 seconds, four after frustrated Oklahoma State coach Mike Boynton was ejected because of consecutive technical fouls, and the Bears won 78-70 for their 20th victory in a row.

“I just try to shoot them and make them all net," Teague said. “It just felt like I was in the gym getting practice shots. It felt quiet all around. It felt great."

The Cowboys (11-12, 1-9) also had five players in double figures and were within 70-68 after Lindy Waters III, playing with a protective mask, made two free throws with 35 seconds left

But they also had four players foul out of the game. Boynton's technical fouls came with nine seconds left after Jonathan Laurent was the fourth to get five fouls.

“Just a lot of frustration,” Boynton said. “I’ve got four guys foul out of the game, that’s pretty hard to understand. The game was obviously pretty physical both ways. So that’s about all I’ll say about that."

Before leaving the court, with the crowd still buzzing, Boynton patted Teague on the back while he stood near the line, then went over and shook hands with Drew and some of the Baylor assistant coaches.

Baylor was 12-of-25 on free throws before Teague made two with 14 seconds left. He was back at the line a few seconds later after the technicals, then hit four before Gillespie, who had been fouled by Laurent, made his two.

Butler had consecutive 3-pointers that put Baylor up 64-55 with 6:08 left, less than three minutes after the game was tied for the only time. Butler also had a jumper in that 13-4 run, though Oklahoma State wasn't done until the closing seconds.

Waters had 16 points after missing Oklahoma State's game because of a fracture near his sinus area after getting hit in the face against Oklahoma last Saturday. Cameron McGriff and Isaac Likekele each had 11 points, while Thomas Dziagwa and Kalib Boone both had 10.

Mark Vital added 13 points for Baylor, while Davian Mitchell had 10.

Oklahoma St.: The young Cowboys were coming off their first Big 12 win, at home over TCU on Wednesday, and again hung tough with Baylor. They were the first Big 12 team to score 70 against the Bears, and first team to outrebound (38-30) them in Waco. Oklahoma State led 30 minutes in the previous meeting last month before Baylor pulled out a 75-68 road win.

“I was proud of what our kids did the two times we played them,” Boynton said. “It doesn’t show up as a win either time, but it’s something certainly that we can build from, and who knows, maybe we’ll see them again."

Baylor: The last Big 12 team to win 20 games in a row was Kansas in 2008. The conference record is a 22-game streak by the Jayhawks in 1997, the league's first season. The last time Baylor won 10 consecutive conference games was with a 10-0 start in the Southwest Conference in 1948.

After Butler and Teague opened the second half with 3-pointers for a 41-26 lead, the Bears missed seven of their next eight shots. Oklahoma State went on a 15-3 run and was within 3 on Boone's basket with 13:48 left. About five minutes later, the game was tied 51-all when Waters passed to McGriff for an emphatic two-handed slam. But Mitchell's three-point play put Baylor ahead to stay.

The Cowboys also fell behind 24-10 midway through the first half before a 14-3 capped by two free throws by Waters that got them to 27-24.

Baylor, already the first team to hold the No. 1 spot three weeks in a row this season, is all set to make it four when the new Top 25 comes out Monday.

Oklahoma State plays Wednesday night at Kansas State, the first matchup of the season between the two teams.

Baylor has a quick turnaround for the third time in four weeks with a Monday night game. The Bears are at Texas, which they beat 59-44 in their Big 12 opener at home on Jan. 4.