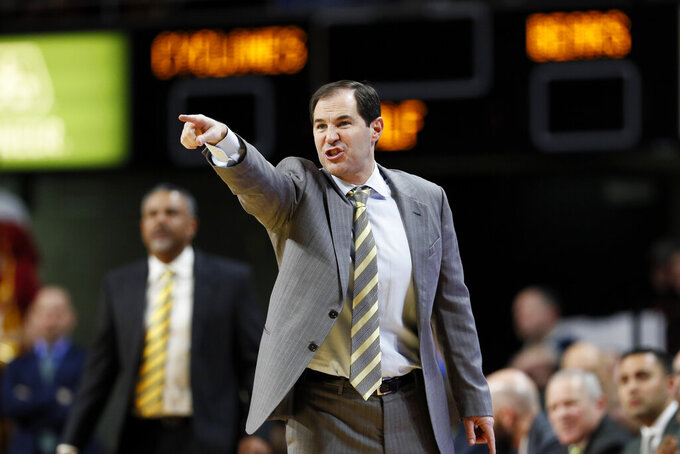 Baylor coach Scott Drew and his team don't spend time pondering those final five minutes in Alaska the first week of the season that led to the only blemish on their record.

“When you’re playing this competition every night in college basketball you’re probably going to lose at some point," Drew said. “That’s why no one has been undefeated since Indiana in 1976."

Baylor and Kansas, whose unprecedented streak of 14 conference titles in a row ended last season, were expected to be the top teams in the Big 12. The Bears' first-ever win at Allen Fieldhouse last month has just reversed the anticipated order for now.

Baylor traveled about 4,000 miles to play Washington in Anchorage on Nov. 8. The Bears had a 10-point lead with five minutes left, but didn't make another field goal and lost 67-64.

“After that, we just don't like to lose,” forward Freddie Gillespie said.

The second half of the 18-game Big 12 schedule starts Saturday.

Texas Tech and Kansas State tied for the Big 12 title last season, the first time since 2003-04 that Kansas didn't at least share the conference crown.

The Red Raiders made it all of the way to the NCAA championship game last April, and lost in overtime to Virginia.

They had only one returning starter after a school-record 31 wins, so like last season coach Chris Beard is again depending on a couple of senior transfers and a lot of freshmen. The Red Raiders (14-8, 5-4) did beat then No. 1 Louisville on Dec. 10, but lost three of four before beating Oklahoma at home Tuesday.

Kansas State (9-13, 2-7) last season had the senior trio of Dean Wade, Barry Brown Jr. and Kamau Stokes, but has struggled without them. The Wildcats are the Big 12's lowest-scoring team (65.2 ppg).

Kansas has a seven-game winning streak, including four since the ugly game-ending melee Jan. 21 in a lopsided home win over Kansas State.

After the school indefinitely suspended Silvio De Sousa for his role, the Big 12 suspended the 6-foot-9 forward 12 games — essentially the rest of the regular season.

The Jayhawks still have Big 12 scoring leader Devon Dotson (18.0 ppg) and 7-footer Udoka Azubuike, the league's preseason player of the year and leading rebounder at 9.5 a game.

No. 13 West Virginia (18-4, 6-3) has put together a solid defense despite a roster makeover. The Mountaineers have held opponents to the lowest percentage of made field goals (36.7%) in the Big 12 and allow only 61 points a game.

Opponents are also 0-12 in Morgantown this season. Coach Bob Huggins uses what he calls the “hanging carrot” of playing time to reward his players who play defense.

“I think we’ve gotten a lot better,” Huggins said. “I think our size inside helps us. It’s hard to score over those guys inside.“

Texas (14-8, 4-5) has played better since a disastrous 38-point loss at West Virginia, but faded late at Kansas on Monday to spoil an upset bid.

“Extremely disappointed. If anyone comes in here and wins, it changes the course of your season,” Longhorns coach Shaka Smart said.

Texas instead looks like more of the same in Smart’s fifth season: stuck in the middle or the bottom third of the league and battling just to creep into the NCAA Tournament, which the Longhorns have missed two of the last three seasons.

Smart is 31-43 in the Big 12 overall and fans are grumbling about Smart’s future But athletic director Chris Del Conte has given no hint that he intends to make a change. Smart has three years remaining on his contract with a $10.5 million guaranteed buyout.

“I understand (fans) want us to be successful, but those kids are working hard,” Del Conte said this week. “Shaka’s working his tail off. We also have to do everything we can to support our coaches and student-athletes. But the noise around them is real, and I acknowledge that.”

The Big 12 plays a round-robin schedule, but there are still some teams that haven't met this season. Four of the five games Saturday are first-time matchups: Kansas at TCU; West Virginia at Oklahoma; Texas Tech at Texas; and Kansas State at Iowa State.

Kansas is at Baylor on Feb. 22, a week before the Jayhawks go to Kansas State.