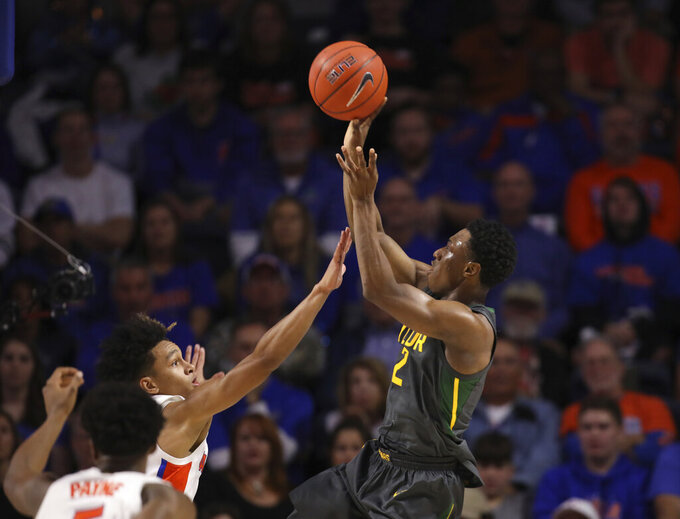 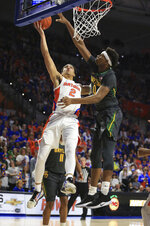 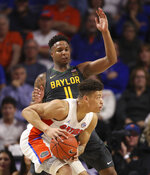 GAINESVILLE, Fla. (AP) — No. 1 Baylor was surprised to learn it was a slight underdog on the road against Florida.

The Bears raised their eyebrows, shook their heads, shrugged their shoulders and decided to treat it as bulletin-board material.

MaCio Teague and Devonte Bandoo scored 16 points apiece and Baylor extended its winning steak to 16 with a 72-61 victory over the Gators in the Big 12/SEC Challenge on Saturday night.

“One thing about this team, when things are out like that, we take it as motivation," Bandoo said. "We just knew we were a great team and knew if we executed the game plan everything would come out right.”

Baylor (17-1) was a two-point underdog at tip-off, an odd line considering the team hadn't lost in 2 1/2 months. Vegas surely didn't do Florida (12-7) any favors, and those odds-makers probably won't underestimate the Bears again.

Baylor's stifling defense was on display — as usual — as it held the Gators to 44% shooting, including 23.5% from 3-point range. That much was expected.

“Baylor made it look ugly for us at times tonight," Florida coach Mike White said.

The Bears added a twist by making nine 3-pointers, their most in nearly a month. They were shooting 30.5% from behind the arc in Big 12 play.

“This is one of our bad defensive games,” Florida's Keyontae Johnson said. “They were more connected than we were. They shot the ball with confidence, knowing their shots were going to go in.”

Baylor improved to 6-1 in the annual inter-conference series — the best record of any team in either conference — and assured itself another week atop The Associated Press poll.

Baylor overcame an eight-point deficit early and led by 19 points in the second half before Florida mounted a minor rally. The Gators had a chance to make it a single-digit game with a little more than 7 minutes to play, but they missed the front end of three consecutive one-and-ones. Kerry Blackshear Jr. misfired twice on back-to-back possessions and then Noah Locke did the same seconds later.

“My goodness, my good free throw shooters," White said. "To beat the No. 1 team country, you have to make some of those."

Florida eventually whittled Baylor’s lead to 10 on Andrew Nembhard’s driving layup with 2:40 remaining. But the Bears answered on the other end thanks to their 13th offensive rebound and did little, if anything, wrong down the stretch.

The Gators fell to 2-17 against the No. 1 team, including 10 consecutive losses.

Johnson led Florida with 20 points. Nembhard added 16 points and eight assists, but he missed more shots (8) than he made (6), including all four 3-pointers. The Gators missed 13 of 17 from behind the arc.

Baylor took control of the game with a 13-2 run to close the first half, turning a tie game into a double-digit lead. The Bears hit six 3-pointers in the opening 20 minutes — twice as many as Florida — and had seven offensive rebounds.

They got help from an unlikely source: Bandoo, who averages 7.5 points off the benched, scored 11 in the opening half. They also fed off the betting line.

“We've got a lot of guys that have been through the battles and wars, and they don't get rattled as easy as someone that hasn't,” Baylor coach Scott Drew said.

Baylor: The Bears matched their best 18-game start in school history. They also started 17-1 in 2011-12 and 2016-17. They landed No. 3 seeds in the NCAA Tournament after those regular seasons and were eliminated both times by SEC teams (Kentucky in ’12, South Carolina in ‘17).

Florida: The Gators appeared to be taking strides while beating then-No. 4 Auburn last Saturday and nearly stunning LSU on the road earlier this week. But the team’s offensive woes returned against Baylor — no surprise given the Bears are one of the best defenses in the nation.

Baylor: Returns to Big 12 action and plays at Iowa State on Wednesday night. The Bears have won three of the last four in the series, but lost to the Cyclones in the conference tournament last March.

Florida: Returns to SEC play and hosts Mississippi State on Tuesday night. The Gators lost to the Bulldogs last year to end an eight-game winning streak in the series.