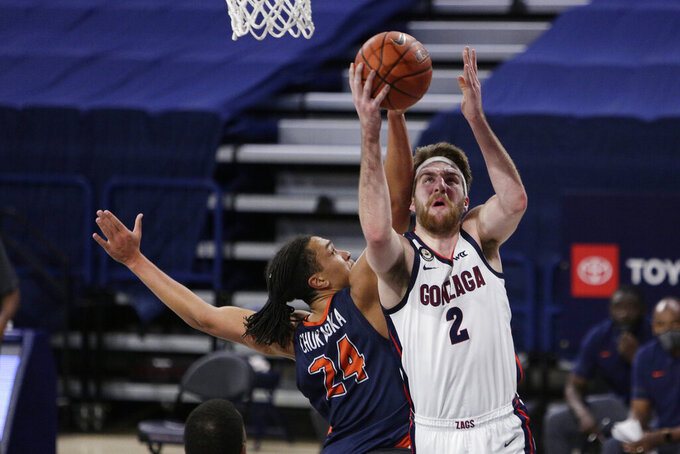 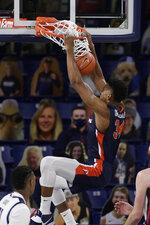 SPOKANE, Wash. (AP) — Top-ranked Gonzaga has been jumping on opponents early this season, leading by an average of more than 20 points at halftime in home games. That didn't happen against Pepperdine, as the Zags led by just four points at the break.

Corey Kispert had 23 points and eight rebounds as undefeated Gonzaga stormed back in the second half to beat Pepperdine 95-70 on Thursday for its 17th consecutive victory over the last two seasons.

"We're not just going to blow everybody out in the first half," Gonzaga coach Mark Few said. "It's not going to happen."

Few cited missed shots from close range and turnovers as the cause of Gonzaga's slow start.

"We missed a lot of little shots around the rim early," Few said. "We were trying to make something out of nothing."

He also said: "We are not used to turning the ball over 18 times."

Gonzaga shot 61% in the second half and outscored the Waves 52-31 to win its 46th consecutive home game, the longest streak in the nation.

Kessler Edwards scored 14 points and Kene Chukwuka 11 for Pepperdine (4-6, 0-1), which was playing its first game since Dec. 23 because of COVID-19 protocols.

Pepperdine hounded Gonzaga into 36% shooting in the first 12 minutes of the game and trailed just 23-21.

Edwards replied with consecutive 3-pointers and Darryl Polk added a 3-pointer at the buzzer as Pepperdine cut Gonzaga's lead to 43-39 at halftime.

Ayayi had 14 points and four steals at the half for Gonzaga.

Gonzaga went on a 15-4 run midway through the second to take a 65-48 lead with 11 minutes left. The Waves made only 4 of 17 shots to open the second half and could not close the gap.

Timme, who finished with seven rebounds and four assists, was particularly solid in the second half.

"He was pretty sloppy in the first half," Few said. "He missed three, four, five shots right around the rim."

Pepperdine coach Lorenzo Romar said his team did some good things against a great opponent.

"They had 18 turnovers and I thought we were active defensively in the first half," Romar said. "In the second half, we came out and didn’t have the same look. Whether we used it all up in the first half, I don’t know. But it was a tale of two halves for sure."

The Bulldogs are 95-0 against West Coast Conference teams not named Saint Mary’s or BYU since 2014.

Gonzaga has a 51.8% chance of going unbeaten in the regular season, according to KenPom.

In the first 12 games (480 minutes), Gonzaga trailed for just 27 minutes, 14 seconds, most of that against West Virginia.

Pepperdine: The Waves gave Gonzaga a scare in the last game in Spokane, losing just 75-70 on Jan. 4 ... The Waves started the season strong, but have slumped recently, losing four of their last five ... Colbey Ross is second in the West Coast Conference, averaging 19 points per game, but was shut down Thursday, scoring nine points. ``He's a terrific player," Few said.

Gonzaga: The Bulldogs came in as one of nine unbeaten teams left in the nation ... Gonzaga leads the nation with an average of 96.1 points per game and in shooting at 55.6% ... For the second straight week, Ayayi was named the WCC Player of the Week after recording the first triple-double in program history in a win at Portland.

A win at Saint Mary's on Saturday would likely keep the Zags on top of the Top 25.

Gonzaga plays at rival Saint Mary's on Saturday. Kispert said it was too bad there will be no fans at the game, because the crowd at Saint Mary's is raucous. "It will be business as usual for us," Kispert said. "It's the same old Saint Mary's."