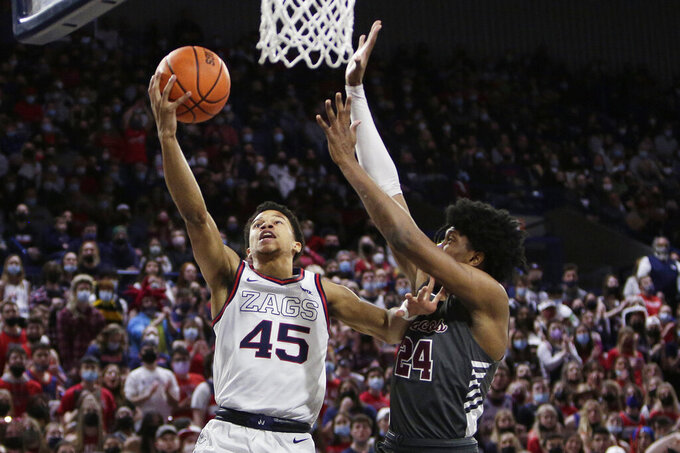 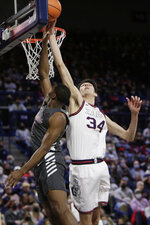 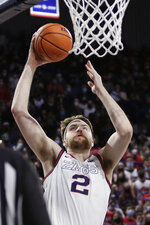 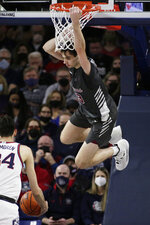 Nembhard scored 21 points, including a pair of late 3-pointers that iced it, and Bolton contributed 18 points.

“It was good for them to step up and make plays like that,” coach Mark Few said, adding that Nembhard was “delivering big time.”

“It means even more this year,” Few said. “The league is the best it's been since I've been here.”

With the WCC possibly sending four teams to the NCAA Tournament this year, “to be undefeated is quite an accomplishment,” Few said.

Gonzaga (23-2, 12-0) won its 16th consecutive game and its 67th straight home game, a streak that dates to 2018 and is the longest in the nation. The Zags are the current front-runner for the top seed in the NCAA Tournament.

PJ Pipes scored 27 points and Jalen Williams 15 for Santa Clara (18-10, 8-5), which ranks third in the WCC. The team is fighting for Santa Clara's first postseason tournament berth since 2013.

The 12-point margin of victory was the lowest of the season in a WCC game for Gonzaga.

The games was tied at 18 with 10 minutes left in the first half. But the Zags erupted for a 20-4 run and Santa Clara missed 10 of 11 field-goal attempts. Pipes then scored seven points to cut Gonzaga's lead to 41-31 by halftime.

Santa Clara got within single digits several times early in the second half, but the Bulldogs led 59-46 with 12 minutes left.

A pair of 3-pointers by Nembhard lifted Gonzaga to a 78-62 lead with just over two minutes left, and Santa Clara did not threaten again.

“We battled all the way through until the end,” Santa Clara coach Herb Sendek said. “It's tough playing against a team like Gonzaga but I couldn't ask for more from my guys.”

This was the final home game of the season for Gonzaga, which honored seniors Bolton, Nembhard, Matthew Lang and Will Graves.

Former Gonzaga stars Kelly Olynyk, Killian Tillie and Jalen Suggs, who now play in the NBA, were at the game. “That's what makes this place so special,” Few said. “It's great they want to come back.”

Gonzaga has the highest field goal percentage in the nation, but the Zags managed to shoot only 40% against Santa Clara. The Broncos weren't much better, hitting 41% of their shots.

Gonzaga should stay at No. 1 next Monday.

Santa Clara: At Pepperdine next Thursday.

Gonzaga: Wraps up the regular season at San Francisco on Thursday and at Saint Mary's on Saturday.