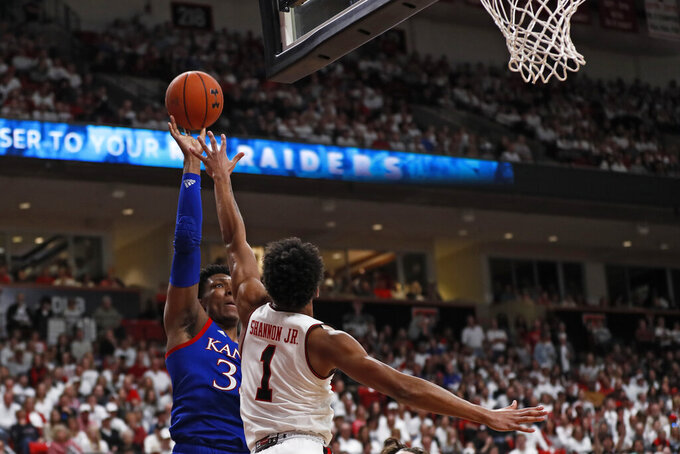 Texas Tech (18-13, 9-9), last year's national runner-up after sharing the Big 12 title with Kansas State, had a chance to tie the game with 2.8 seconds left. But Davide Moretti, who made a 3-pointer only seconds earlier, missed another one from long range. The Red Raiders guard fell to floor after contact with Marcus Garrett, but was no foul called.

Moretti had 18 points, while TJ Hoyfield had 11 points for Texas Tech, which lost its fourth game in a row when trying to get back into the NCAA Tournament.

Kansas had already clinched at least a share of its 19th Big 12 title, the 15th in 16 seasons, with a win Wednesday night over TCU. The Jayhawks were outright champions by halftime Saturday, when second-place and No. 4 Baylor (26-4, 15-3) lost 76-64 at West Virginia.

Azubuike put Kansas ahead to stay with his put-back dunk with 1:41 left that made it 59-57.

Holyfield's 3-pointer with 2:11 left tied the game, and came during a stretch of just more than two minutes when he and Azubuike were trading points. Both had a free throw, then both had layups before Holyfield's 3 and Azubuike's go-ahead putback.

Kansas: The Jayhawks had never won 17 conference games in the same season. They had won 16 games three times (2002, 2012, 2017). Kansas finished 9-0 in Big 12 road games. They are a certain No. 1 seed, likely the top overall seed, in the NCAA Tournament regardless of what happens in the Big 12 Tournament.

Texas Tech: The Red Raiders, who won a school-record 31 games last season, lost to unranked teams Oklahoma and Texas last week before falling in overtime at No. 4 Baylor and then at home to Kansas on the final week of the regular season. Jahmi’us Ramsey has been their leading scorer as a freshman, though he had only six points in the regular-season finale. Tech has struggled to have an inside presence this season.

The Big 12 Tournament in Kansas City. The Jayhawks and Red Raiders both got first-round byes and will play Thursday against opponents to be determined.