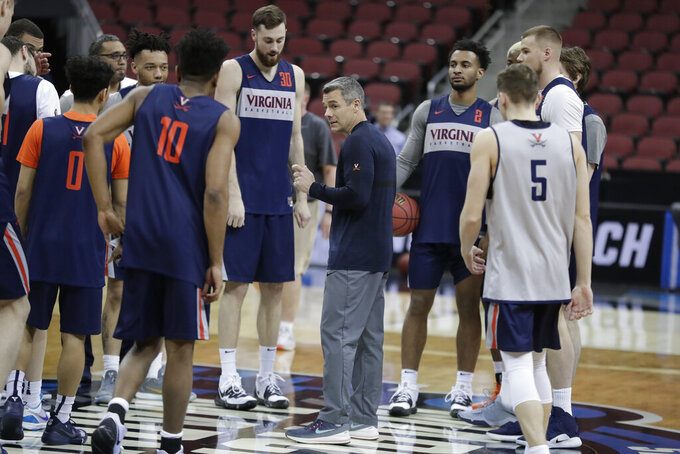 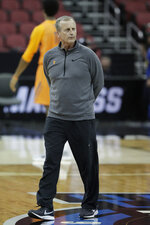 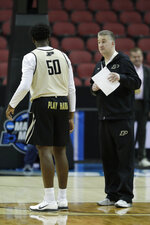 Now in the Sweet 16, the Cavaliers aim to be more assertive against No. 12 seed Oregon.

The Cavaliers hope that playing in a venue they've thrived in helps that quest in Thursday night's South Regional semifinal.

Virginia (31-3) has won its past four visits to the KFC Yum! Center, home floor of fellow Atlantic Coast Conference member Louisville. The Cavaliers have overcome double-digit deficits in the past two wins, including last month's 64-52 victory over the Cardinals.

Sophomore guard De'Andre Hunter has been the star in both games, scoring 26 points a year after banking in a game-winning 3-pointer against Louisville.

While those clutch performances might be coincidental for Hunter, he hopes the Cavs can continue their pattern of success.

"I feel like as a team we're really comfortable," he said Wednesday. "When we lock down on defense I feel like we can beat anyone in the country. We're a lot better offensively than we've been in the past couple of years."

Virginia had to work hard to prove it during an eventful first weekend in the tournament.

Looking as if they might be bounced by a No. 16 seed for the second consecutive March, the Cavs rallied from 14 down to beat Gardner-Webb 71-56. Virginia cruised past Oklahoma 63-51 in the second round by holding the Sooners to 37 percent shooting. Getting that first win seemed to provide a lift.

"Certainly, there's an enjoyment and freedom in it," coach Tony Bennett said, "but there's also a desire to play well and advance again."

Virginia's next challenge in stopping the surging Ducks (23-12) who have won 10 in a row by an average of 18 points. That run includes routs of Wisconsin and UC Irvine in the NCAAs.

Having four 6-foot-9 starters has helped, though Oregon coach Dana Altman partly credits the turnaround to having everyone again after a rash of injuries.

"Everybody has injuries," Altman said. "But the guys have stepped up. Our communication's been a lot better here lately. Guys have taken a lot more pride in doing a good job with the scouting report and with their defense. Hopefully, we can keep that up."

Tennessee exhaled after an 83-77 overtime escape of No. 10 Iowa after blowing a 25-point lead. The Volunteers are back in this round for the first time since 2014, but face a Boilermakers team in the Sweet 16 for the third consecutive year.

"They've worked hard to be here," Tennessee coach Rick Barnes said. "You want them to enjoy it. But we've always said it gets more fun each time you win, and you hope that we can stay focused enough to do our job and there's more left."

Purdue has won eight of 10 and routed defending NCAA champion Villanova 87-61 in the second round.

Other things to watch in the South Region:

An Oregon victory would push Altman past Ernie Kent as the program's winningest coach. Each has 235 wins with the ninth-year coach averaging 26 per season.

Tennessee has five players averaging in double figures with the top six in its rotation combining for 475 starts. No freshman has scored this season but the Sweet 16 is still a new experience for the Vols, who are leaning on Barnes in his seventh career regional semifinal. Tennessee is 1-6 all-time in regional semifinals.

"We're coming in with the mindset of competing and understanding we have one game that we have to worry about," said Grant Williams, the two-time Southeastern Conference player of the year. "Then we can move on to the next one if we have the opportunity to."

Virginia is 2-0 all-time against Oregon. Tennessee and Purdue have split four meetings.

Tennessee beat Purdue 78-75 in overtime of the opening round at the Battle 4 Atlantis in November 2017. The Vols are essentially intact from that game while the Boilermakers have experience more changes with Isaac Haas and Dakota Mathias among those gone from last season.

Carsen Edwards is Purdue's all-time scorer in NCAA Tournament play with 153 points, and the junior guard is coming off a career-best 42 points against Villanova. Edwards has knocked down 107 3-pointers this season and is averaging 23.6 points a game.