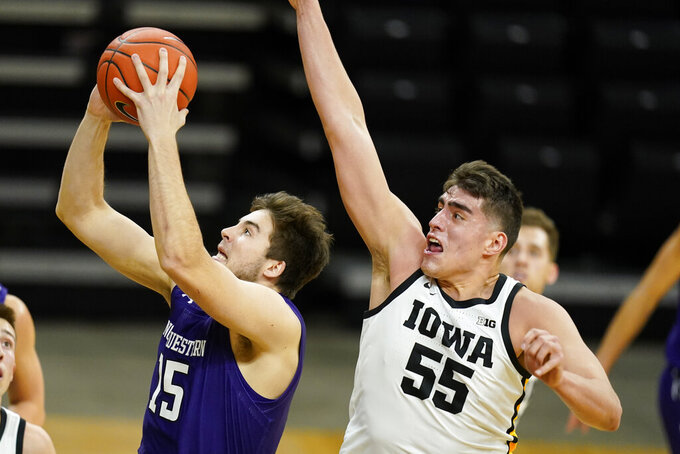 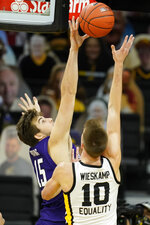 IOWA CITY, Iowa (AP) — Fran McCaffery knows he doesn’t have to tell Jordan Bohannon all that he has accomplished in his career at Iowa. Yet the Hawkeyes coach felt the need to talk to Bohannon after his recent struggles.

“Just to remind him how great he is, and who he is,” McCaffery said. “And what our team needs.”

“I think that kind of helped, him giving me a little nudge,” Bohannon said.

Bohannon, a fifth-year senior who hit a game-winning shot against the Wildcats two seasons ago, matched his season high. He was 7 of 11 from the field, including 6 of 9 on 3-pointers, and added five rebounds and five assists.

“He was preaching what he always has been since I’ve been here,” Bohannon said of his meeting with McCaffery. “He has all of the confidence in me, and that’s why he recruited me, because of how I’ve played on the court with my swag, and how much different we are on the court when I’m like that. He really hasn’t been seeing that in this part of the season.”

Bohannon played the entire second half.

“He was spectacular tonight,” McCaffery said. “I think you could kind of see it coming.”

Bohannon, coming off surgeries on both hips last season, had seven 3-pointers earlier this season in a win over North Carolina, but had just seven in the last five games.

“I didn’t feel like myself in these first seven, eight games,” Bohannon said. “I just really haven’t been moving as well. I know I have a lot of catching-up to do, to get back in my rhythm.”

“He had a couple of games that wouldn’t be up to his standards,” McCaffery said. “He’s a competitor, as fierce of a competitor as I’ve been around. He challenged himself to do what he does, and it was fun to watch.”

It was something that Northwestern coach Chris Collins has seen before.

“It feels like I’ve coached against him for a hundred years,” Collins joked.

Garza, the nation’s leading scorer at 28.8 points per game, had his streak of scoring 20 or more points against Big Ten opponents snapped at 18 consecutive games. He had just six points in the first half.

“He affects your defensive game plan greatly, because he’s unstoppable one-on-one,” Collins said of the Wildcats’ plan to consistently double-team Garza. “We knew he was going to score — he’s not going to go scoreless. But (Bohannon and Fredrick) really picked them up.”

Joe Wieskamp added 10 for the Hawkeyes.

“We didn’t panic,” McCaffery said. “We ended up getting the stops we needed.”

Pete Nance led Northwestern with a career-high 21 points, including 17 in the first half. Chase Audige had 14 points, Miller Kopp added 11, and Ryan Young 10.

Northwestern was down 65-60 when Nance was called for a technical foul after blocking a shot by Iowa’s Keegan Murray. Bohannon hit two free throws after the technical, starting an 11-2 Iowa run. “Obviously something was said, but it happened at the other end of the court,” Collins said. “I did think it came at a key point in the game. We had gotten into a rhythm.”

FIRST TIME FOR EVERYTHING

This was the first matchup of ranked teams in the series, which Iowa leads 120-60. The Hawkeyes have won 12 of the last 15 in the series, including five consecutive games.

The Hawkeyes bounced back from Friday’s 102-95 overtime loss at Minnesota, a game in which they led by seven points in the final minute of the second half. The Wildcats were one of two teams left who were undefeated in Big Ten play.

Northwestern: At No. 16 Michigan on Sunday.