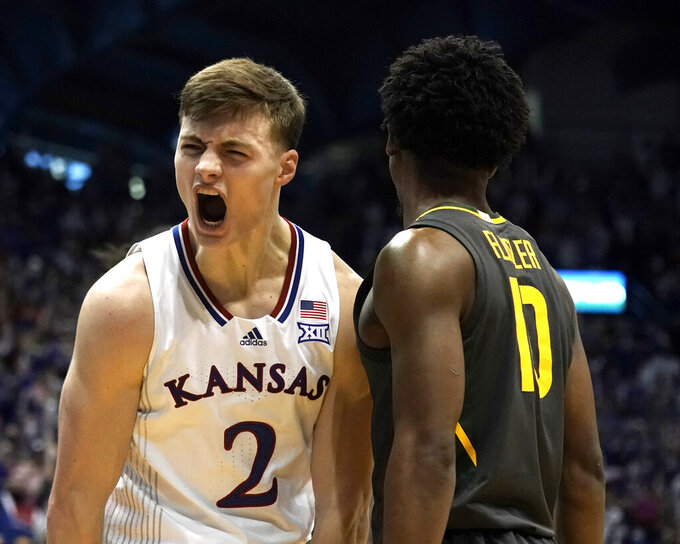 Kansas guard Christian Braun (2) celebrates after a shot during the first half of an NCAA college basketball game against Baylor Saturday, Feb. 5, 2022, in Lawrence, Kan. (AP Photo/Charlie Riedel)

LAWRENCE, Kan. (AP) — Christian Braun and Ochai Agbaji each scored 18 points and No. 10 Kansas bolted to a big lead and routed No. 8 Baylor 83-59 Saturday to hold the top spot in the Big 12 Conference race.

“I thought we played pretty solid," Kansas coach Bill Self said. "We rebounded it. Our first-shot defense was good, and our ball-screen defense was excellent. I thought it was a good team outing.”

Baylor (19-4, 7-3) had won nine straight games against Top 10 opponents. But the Bears never got close to extending that streak — after scoring the first basket, they quickly fell behind 12-2 and their deficit kept increasing.

Jalen Wilson scored 15 for Kansas. Braun had 10 rebounds and Agbaji had nine as the Jayhawks grabbed a 46-37 advantage on the boards.

“It was a lot of fun,” Braun said. “We took last Saturday pretty hard. We had to bounce back. We did good job of coming out with more energy than we did last Saturday.”

Adam Flagler had 16 points for Baylor and Kendall Brown added 12.

“Well, that’s not how we envisioned today,” Baylor coach Scott Drew said. “They killed us in transition and second-chance points. We didn’t give our half-court defense a chance.

“It snowballed on us. We haven’t been beaten like that in three or four years. It’s disappointing. It starts with me. You’re not supposed to let things snowball like that as a leader," he said.

Kansas was ahead 21-7 before the second media timeout, stretched the lead to 20 and led 39-21 at halftime. Baylor never got closer than 16 points after the break.

“The job we did on Flagler in the first half was also good,” Self said. “He got loose in the second half a few times. I thought our defense was probably as good as it’s been all year.”

The Jayhawks reached the 1-and-1 bonus with 16:43 left in the game. An offensive foul on Matthew Mayer, after he appeared to be hacked on his way to the basket, was one of the early fouls and drew a technical foul on Drew.

“I thought we responded pretty well up there after getting it handed to us last Saturday," Self said.

Baylor will stay in the state of Kansas in its next game, taking on Kansas State in Manhattan on Wednesday night.

Kansas plays at No. 23 Texas on Monday.