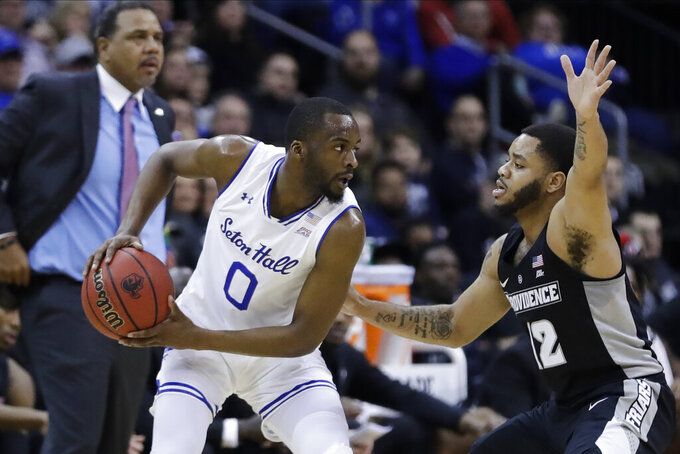 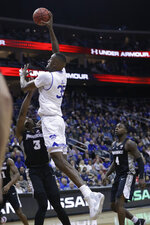 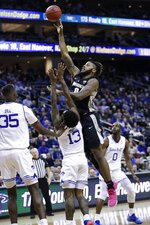 Romaro Gill had 17 points, eight blocks and six rebound in making up for a rare sub-par game by Powell and the Pirates outlasted Providence 73-64 on Wednesday night for their ninth straight victory.

Seton Hall coach Kevin Willard said his team his team has grown since seeing Powell sustain a concussion in a loss to Rutgers on Dec. 14, the last time it lost.

“Ï think all these guys understood they just can't depend on him," Willard said about the preseason All America pick who was limited to six shots from the field. "That's been our biggest growth. We are still going to roll with the little man but I think the biggest thing is we realized when he went down was we have to step up and do something good rather than just depend on him.

Since then, the Pirates (15-4, 7-0 Big East) have gotten contributions from many players. Gill was one of the many Wednesday.

Jared Rhoden added 15 points and eight rebounds in helping Seton Hall to its improve its best start in the league. Powell, who was averaging 22.4 points, finished with 14, and Quincy McKnight had 11.

“I just feel like I have found a rhythm," said Gill, who has scored in double figures in six straight games. “I am just trying to embrace that to the best of my ability and to have fun. That's what basketball is all about.”

Seton Hall shot 58% from the field in matching its longest winning streak since 2002-03.

Alpha Diallo had 13 points and eight rebounds for Providence (11-9, 4-3), which was limited to 36% shooting from the field. Nate Watson added 10 points.

“We missed 41 shots and for the second game in a row our defense is letting us down," Providence coach Ed Cooley said.

The 7-foot-2 Gill kept Seton Hall in the game in the first half, hitting 6 of 7 from the field. The shots were either dunks or shots within reach of the basket.

“He was great today,” Cooley said about Gill. “He's an option. When you have a guy like Powell on that floor that demands so much attention and McKnight is a silent assassin ..."

Cooley could have gone on and on talking about the Pirates.

“They're a really, really good team," he said.

Seton Hall, which is closing in on its fifth straight NCAA Tournament berth, never trailed after using a 12-2 spurt bridging the end of the first half and the start of the second to open a 42-34 lead.

Providence cut the deficit to three points several times, but it could never get any closer.

NOTES: ... Friars sophomore G A.J. Reeves returned to the lineup after missing two games with a concussion and scored six points. ... Willard said Pirates starting PF Sandro Mamukelashvili probably won't return to lineup until next month. He has been out since Nov. 29 with with a broken wrist. ... Seton Hall's record for consecutive wins in a single-season is 27, set in 1952-53

Providence: Has lost consecutive games to ranked teams and now faces another this weekend. Needs to win one of these games to make an impression

Seton Hall: This was not one of the Pirates' better performances. Still they found a way to win the opener of a three-game homestand. Gill's recent emergence is making this team dangerous.

Providence: Hosts No. 9 Villanova on Saturday.