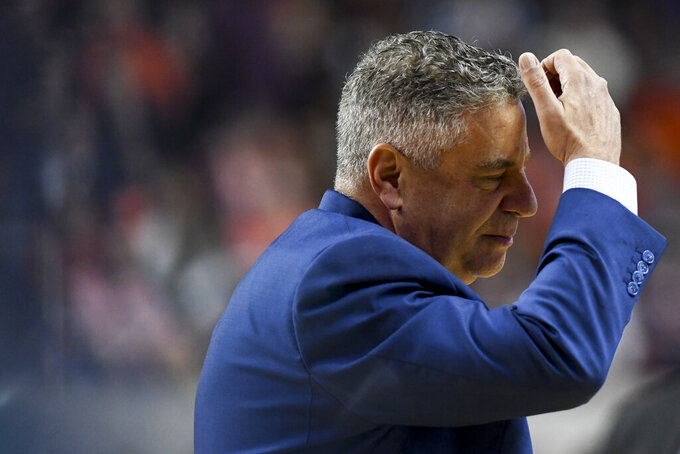 Auburn head coach Bruce Pearl scratches his head during a timeout in the first half of an NCAA college basketball game against LSU, Saturday, Feb. 8, 2020, in Auburn, Ala. (AP Photo/Julie Bennett)

AUBURN, Ala. (AP) — The Auburn Tigers were down eight points against LSU with 86 seconds left when J'Von McCormick started sinking 3-pointers.

One. Two. Three. In a frenzied 20-second span, the 11th-ranked Tigers' point guard brought them back and ultimately hit the game-winning basket for a 91-90 overtime victory over No. 25 LSU last Saturday.

It was the latest improbable win for Auburn (21-2, 8-2 Southeastern Conference). The Tigers hope they need to pull off another Wednesday night against rival Alabama (13-10, 5-5). But The latest vaulted Auburn into a share of first place in the league with LSU and No. 12 Kentucky.

“If you're going to win a game like that, against a team like that, you have to have special,” Auburn coach Bruce Pearl said after the win against LSU. “We had a lot of special.”

But the Tigers also commonly find themselves down that much to begin with. Auburn has rallied for wins seven times from deficits of seven points or more, including in some big games. The Tigers have also gone 4-0 in overtime games and 9-0 in games decided by six points or less.

Auburn's only losses were routs at Alabama and Florida in back-to-back games. The Tigers haven't had an abundance of easy wins. They certainly lack some of the star power from last season's Final Four team led by Bryce Brown, Chuma Okeke and Jared Harper.

“I think the team has shown some chemistry, some mental toughness,” he said Tuesday. “Gosh, to have (this) record right now with our statistic breakdown, it just doesn’t make any sense, other than to give the team credit for how hard they’re fighting and how they’re able to manage to win close games.

"The problem is that we’re in all these close games because we’re just not that much better than our opponents.”

But Auburn has won six straight games, including back-to-back overtime wins over Arkansas and LSU and a victory over the Wildcats.

It has made for a razor-thin margin between the top of the SEC heap and the middle of the pack.

— Auburn gained a share of the lead by rallying late in regulation, getting three lightning quick 3-pointers from McCormick. McCormick's floater with 0.1 seconds left sealed the win for Auburn, which trailed by as many as 14 points in the second half. Pearl said it was “one of the better comebacks of my career.”

— The 19-point comeback at Mississippi on Jan. 28 supplies some competition, just without the big-game stakes. It's tied for the program's third-biggest rally. Auburn won 83-82 in double overtime after trailing 39-20 early in the second half. Isaac Okoro had a basket and foul shot and a block in the final two minutes.

— Last Wednesday, Auburn trailed Arkansas by 11 points in the final six minutes of regulation before winning 79-76 in overtime. McCormick started the rally with a 3-pointer and hit another one for the lead.

— Auburn also had a big non-conference comeback, rallying from 14 points down to beat Furman 81-78 in December — again in overtime. McCormick made a tying layup with 14 seconds left in regulation.

Center Austin Wiley said this team has begun to show some of the same traits that carried Auburn down the stretch last season.

“I feel like we've learned that we're resilient and we can never give up,” Wiley said. “Kind of like how we felt at the end of the year last year, just how we kept playing hard no matter what, no matter how much we got down.

“And how much we were clicking in all areas and just how we worked together and jelled together as a team. I feel like we're starting to feel like that now.”