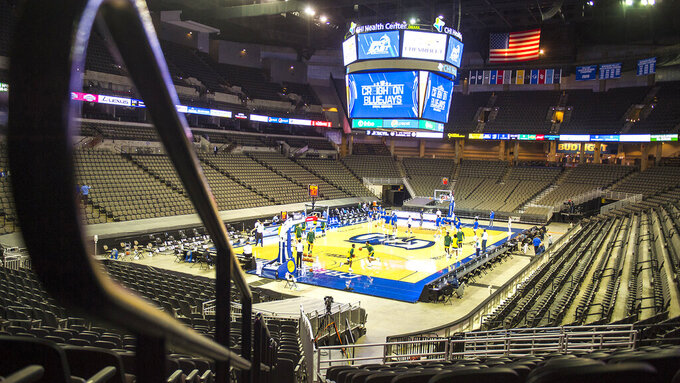 OMAHA, Neb. (AP) — Marcus Zegarowski wasn't quite right, Denzel Mahoney was ailing, the 3-point shots weren't falling and the atmosphere for a season opener at home was blah.

“If there’s ever a year just to take the next game and try to get past it with a W and don’t worry about how it happened, I think this is the year,” McDermott said. “Let's try to figure out the next one and see what we have available and we’ll strap it up and see what happens.”

Christian Bishop scored 13 of his 16 points in the second half and Antwann Jones fueled the decisive run in the first half. Their performances helped offset the Bluejays' shooting struggles. They made just 8 of 35 3-pointers.

Creighton’s opener was delayed until Sunday because of a COVID-19 outbreak in the program. The Bluejays were originally scheduled to begin the season Wednesday at the Crossover Classic in Sioux Falls, South Dakota.

Jones started his first game at Creighton in place of Mahoney, the Big East sixth man of the year last season. Mahoney is coming off a case of COVID-19 and chose to not play.

“He hasn’t had hardly any practice time so I was in full agreement that if he would have decided to play, he would have played only in an emergency situation,” McDermott said. “He needs to get his body back into basketball shape.”

Jones scored nine of his 11 points in succession as Creighton turned an early deficit into a lead, and Bishop had nine points in the first five minutes of the second half as the Bluejays went up by 23 points.

That’s when Creighton began finding some rhythm. Jones, a transfer from Memphis, made two free throws, a layup and 3-pointer and Mitch Ballock dunked to end a 16-2 run that put Creighton ahead 20-12.

Zegarowski, the Big East preseason player of the year, was mostly off with his shots, which McDermott attributed to him missing considerable practice time rehabilitating his knee after offseason surgery. Zegarowski did give the Bluejays their first double-digit lead with a 3-pointer and he made it 36-24 at half when he beat the buzzer with a jumper.

He was just 2 of 11 on 3s and finished with 12 points, six assists and a late turnover.

“I joked with him he shot an air ball and made a 3 and neither one hit the rim,” McDermott said. “The first one missed everything and the second one swished. I thought he played through what wasn't his best. While he may have expected his best, I think I knew better.”

Rocky Kreuser had 16 points, Tyree Eady had 12 and Maleeck Harden-Hayes added 11 for the Bison.

North Dakota State ranked sixth in the nation in fewest turnovers last season but has committed 49 in its first three games, including 16 against Creighton.

“I love these guys and I love coaching them,” Bison coach David Richman said. “But Rocky was probably the third guy on the scouting report last year, we're playing a new point guard and I'm playing three true freshmen. It's going to take some time for us.”

Creighton: It took the Bluejays until the middle of the first half to hit their stride in an empty area where they usually draw crowds of more than 16,000. Jones and 7-foot freshman center Ryan Kalkbrenner, who had eight points, two rebounds and a blocked shot in 11 minutes, were revelations.