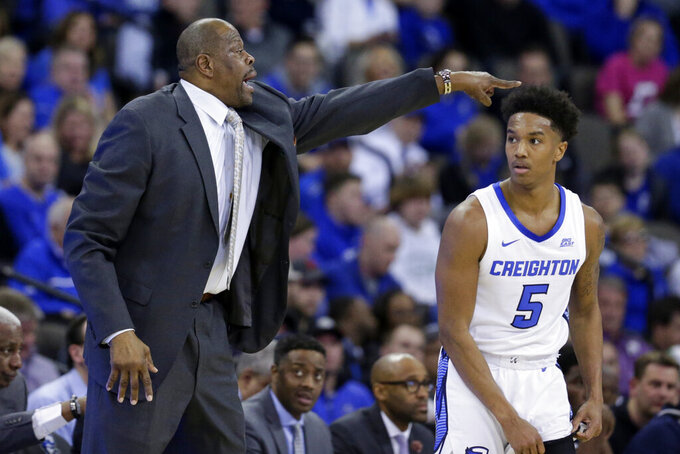 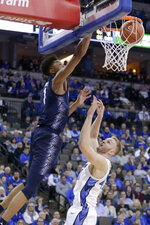 Ballock made a season-high six 3-pointers and finished with 20 points to lead the 11th-ranked Bluejays' barrage from beyond the arc in a 91-76 win over the Hoyas.

“That's just how the ball falls," Ballock said. "I didn't shoot well at their place. I didn't make one until like the six-minute mark (in the second half). I got a couple good looks early tonight. When you see that first one go, your confidence goes up and the guys start finding you and the ball starts rolling.”

The Bluejays' victory, coupled with No. 14 Villanova's 79-77 win at No. 8 Seton Hall, gives Creighton a chance to claim a share of the Big East regular-season title when the Pirates visit on Saturday. A Creighton win would give the Bluejays the No. 1 seed for the conference tournament next week.

“At St. John's we didn't shoot the ball well but we had really good looks, so we live with that,” Ballock said. “We would take those shots 10 times out of 10. Sometimes they fall, sometimes they don't. You're going to miss shots, you're going to make shots. You can't get too high or too low.”

Georgetown (15-15, 5-12) lost its fifth straight. The Hoyas were without their top two scorers. Omer Yurtseven was out a third straight game with an ankle injury. Mac McClung missed his fourth in a row with a foot injury.

“It has a huge impact when you lose two guys who can get 30 on any given night,” Hoyas coach Patrick Ewing said. “We're trying to manufacture points. Right now I'm trying to keep our guys' heads up, keep their spirits going.”

Jahvon Blair led the Hoyas with 22 points, Jamorko Pickett had 17, and freshman Qudus Wahab had his first double-double with season highs of 14 points and 12 rebounds.

Ballock hit a pair of 3s to make it 60-39 and another after the Hoyas scored eight straight points to get within 62-49. That started a 15-6 spurt that finished off the Hoyas.

Creighton overcame Georgetown's size advantage and foul trouble with 9-for-19 3-point shooting in the first half and led 48-33 at the break.

“We tried multiple defenses — matchup, switching, pressing,” Ewing said. “We tried everything but the kitchen sink. When a team's as hot as they were, nothing worked.”

Georgetown: The Hoyas are hurting without Yurtseven and McClung, who combine to average 30 points per game. Those two played huge roles in the 83-80 win over Creighton on Jan. 15. Yurtseven had 20 points and 13 rebounds and McClung scored 19 points.

Creighton: The Bluejays beat all nine Big East opponents in the same season for the second time since joining the league in 2013-14. They've won five straight over the Hoyas in Omaha.

Creighton has been blistering from 3-point range at home, shooting 42.1% at CHI Health Center. That figure is 32.3% on road and neutral courts.

The Bluejays have posted season highs for 3s in back-to-back home games, following a 15-for-26 night against Butler with the 17-for-36 showing against Georgetown.

“When you're at home, you have the fans at your back,” Ballock said. “We're at our best when we're just having fun. When we're tense and tight we do things uncharacteristic.”

“The losses at home last year probably cost us the NCAA Tournament,” coach Greg McDermott said. “It's something we talked about in the offseason. Anyone who is going to move forward, especially in a league as good as ours, has to find a way to protect the home floor because it's so difficult to win on the road. We've got a team that has Final Four ability coming in here Saturday, and we're going to need every one of those 18,000 (fans) and then some to figure out how to win that one.”

Georgetown closes the regular season at home Saturday against No. 14 Villanova. The Hoyas lost 80-66 at Nova on Feb. 11.

Creighton hosts No. 8 Seton Hall on Saturday with the top seed in the Big East Tournament on the line. The Bluejays beat the Pirates 87-82 on Feb. 12.