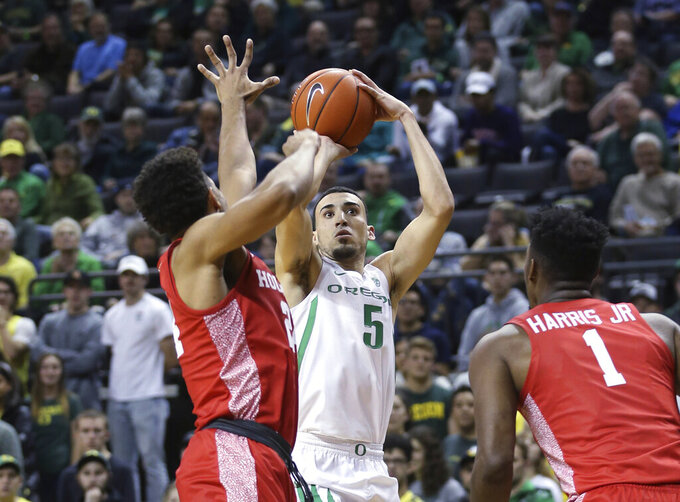 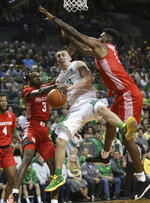 EUGENE, Ore. (AP) — Anthony Mathis had another big shooting night to help No. 11 Oregon get another big win.

Mathis shot 5 for 9 on 3-pointers to finish with 18 points and the Ducks followed along for a 78-66 victory over Houston on Friday night.

“Got a lot of good looks,” Mathis said. “Once again my teammates were doing a great job of finding me when I am open.”

Mathis, a graduate transfer from New Mexico who entered making 68.2% from beyond the arc, helped the Ducks shoot 10 for 20 on 3s and 54% overall.

“We knew Anthony was a pretty good shooter and the guys are looking for him,” Oregon coach Dana Altman said.

Payton Pritchard added 16 points and five assists for the Ducks (5-0), while Francis Okoro scored 12. Oregon had 17 assists on 26 field goals.

“The ball movement was good and we had pretty good looks,” Altman said. “I liked the shots we got from (3-point range).”

Houston coach Kelvin Sampson had a lot of praise for Pritchard.

“The strength of Oregon’s team is their senior point guard,” Sampson said. “He’s in complete control of every facet of their game ... he is a tremendous, tremendous college point guard.

“He’s why Oregon is going to be good this year.”

The Ducks pushed their lead to double digits for the first time at 45-35 on a three-point play by Pritchard and a 3-pointer by Mathis, prompting a Houston timeout with 15:45 left.

The Cougars momentarily cut it to six, but Mathis’ four-point play started a 9-0 run that extended Oregon’s lead to 56-41 with 10 minutes remaining.

Oregon led 32-27 after a first half that was largely a battle between the 3-point shooting of the Ducks and Houston’s dominance on the inside. The Ducks made six of 12 3-pointers, including three during a 15-2 run that gave them a 29-24 lead.

Houston countered with 10 offensive rebounds in the first half, contributing to a 22-13 overall edge on the boards, and used those second-chance possessions to score 13 points. The Cougars finished with a 38-26 advantage in rebounds, grabbing 17 on the offensive end that led to 21 second-chance points.

“We know one thing we’ve got to work on, the boards,” Altman said.

Sampson said the Cougars “have to be good” on the boards because “we’re not a very good shooting team.”

Houston: After winning the previous two meetings with Oregon, the Cougars lost in their first trip to Eugene.

Oregon: The Ducks are 5-0 for the first time since the 2015-16 season, when they reached the Elite Eight of the NCAA Tournament. But the Ducks have yet to play a game outside the state of Oregon.

Houston returns home to play Houston Baptist on Tuesday and will be home for five of their next six games.

Oregon begins play in the Battle 4 Atlantis on Wednesday against No. 13 Seton Hall, the second Top 25 team on the Oregon schedule after an earlier win over then-No. 13 Memphis. The Ducks could then be matched up with No. 8 Gonzaga in the semifinals of the three-day tournament.