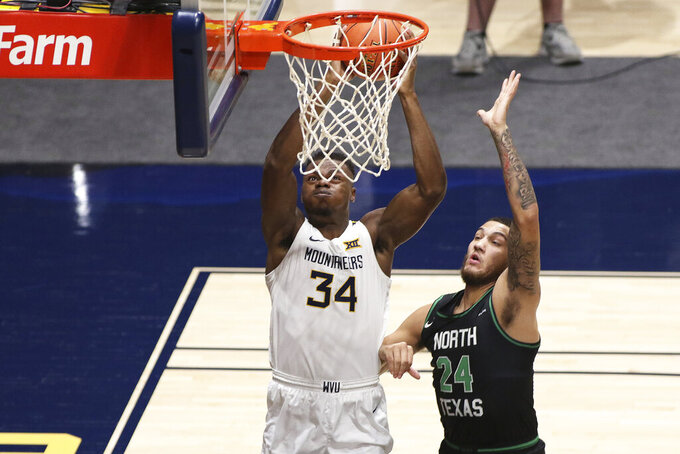 MORGANTOWN, W.Va. (AP) — The uncertainty of playing amid a pandemic is weighing on West Virginia, to the point where the 11th-ranked Mountaineers trailed at halftime to unheralded North Texas and coach Bob Huggins had to light a fire under his team.

The Mountaineers responded, rallying with 18 straight points to open the second half, and fought off a late run by North Texas to win their home opener 62-50 on Friday.

“We woke them up. Its been a long few weeks,” Huggins said. “It’s so hard. We’re playing, we’re not playing. We’re playing this team, now we’re not.”

Taz Sherman added 13 points and Derek Culver had 10 points — all in the second half — and 10 rebounds for the Mountaineers. Culver scored seven points during the decisive run.

“I would say the second half after me getting yelled at by Hugs, yes, it woke me up a little bit,” Culver said.

“We just kind of slowed them down,” Huggins said. “We weren’t really trying to steal the ball or make a lot of plays on the ball. We were just trying to slow them down.”

North Texas had a late surge to get within five points but got no closer.

North Texas: The Mean Green weren’t even supposed to be here. They agreed to play the game after West Virginia had its original home opener against Robert Morris canceled due to COVID-19 concerns.

West Virginia: The Mountaineers will need to perform much better over 40 minutes when they take on No. 19 Richmond on Sunday.