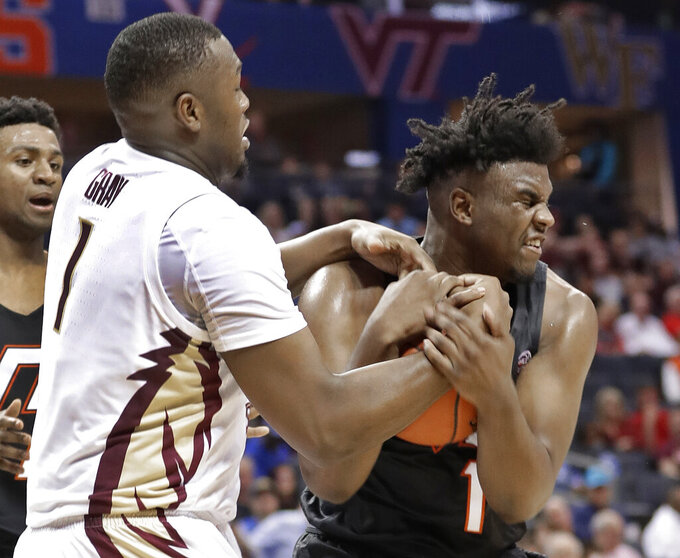 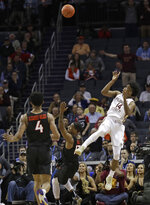 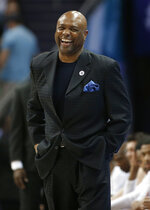 CHARLOTTE, N.C. (AP) — With the clock winding down in a tie game, Florida State's Terance Mann pushed upcourt and launched a twisting off-balance shot that ended with him flat on his back, his feet up in the air and the ball rattling around the rim.

Mann's shot with 1.8 seconds left helped the No. 12 Seminoles edge No. 16 Virginia Tech 65-63 on Thursday in the Atlantic Coast Conference Tournament quarterfinals, keeping the Seminoles' hot hand with the wildest-looking — yet nonetheless effective — of shots.

Mann's shot broke a 63-all tie for the fourth-seeded Seminoles (26-6), who secured the win when Nickeil Alexander-Walker missed a long 3-pointer at the horn on a desperation inbounds play from the far end.

Mann had the biggest shot of the game, but the Seminoles had two other big ones to secure this one in a testament to their balance. That included freshman Devin Vassell hitting a contested 3-pointer with 4.5 seconds left in regulation to force overtime.

"That's just how our team is," said Mann, who had 10 points and nine rebounds. "Whoever feels comfortable with the position they're in, they're going to do it. And we all have full faith in here in everybody to do so."

Vassell scored 14 points to lead the Seminoles, who started the game with a 17-4 lead yet ended up in that tense finish.

It finally came down to Alexander-Walker missing a contested shot in the paint with about 10 seconds left in overtime. The Seminoles didn't call timeout, opting instead to push the ball back the other way.

"I was going to live and die with whatever happened as a result of that," FSU coach Leonard Hamilton said.

Alexander-Walker finished with 21 points for the Hokies (24-8), including a 3 that bounced up off the front rim and dropped through the net for a 63-60 lead with 1:40 left in OT.

The lead didn't hold up in the second overtime matchup between the teams in the past 10 days — both won by FSU.

"He made a great drive, I just tried not to foul," Virginia Tech's Ahmed Hill said of Mann's shot. "He made a beautiful floater and it happened to go in."

Virginia Tech: The Hokies have been grinding through games without injured point guard Justin Robinson (foot) since late January. The Hokies fought their way to win six wins in their final 10 regular-season games, then beat Miami in Wednesday's second round to advance. They just couldn't protect that final lead, with FSU's Phil Cofer hitting the tying 3 at the 1:15 mark of OT to set the stage for Mann's winner.

Florida State: The Seminoles arrived in Charlotte as one of the hottest teams in the country, winning 12 of 13 games to secure a double-round bye into the quarterfinals. They found a wild way to add to that streak.

Mann said he was looking to drive to the rim when he took a pass near halfcourt on that final transition chance. He pushed to the right against Hill and felt a bump, so he lifted off for a shot that ultimately bounced around the rim, touched the backboard and dropped through the net.

"I knew it wasn't a hard-enough bump to get the whistle," Mann said. "So once I was in the air, I knew I had to shoot it. I'm used to doing it."

"It's like a 0.5-second thinking process right there," he said with a laugh.

Williams said team medical staff will take new pictures of foot injury Sunday to see how he has progressed. He said Robinson had also been able to participate in at least some practice work Monday and Tuesday.

"He was able to do a little bit more than Monday," Williams said. "So God's the ultimate healer and we're praying that it works."

Virginia Tech: The Hokies will wait for Selection Sunday to find out their NCAA Tournament destination.