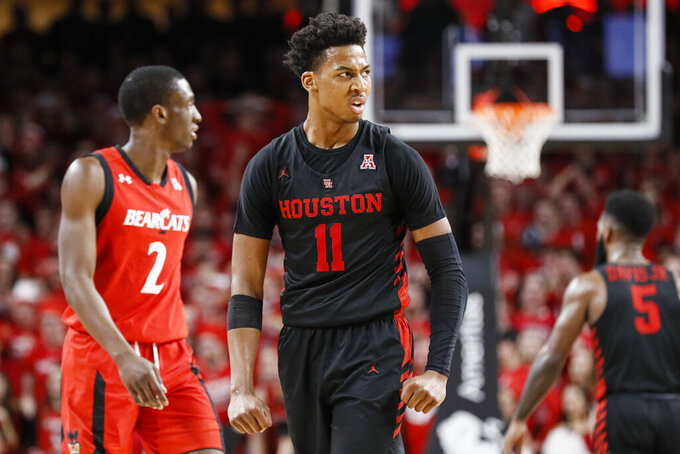 Houston's Nate Hinton (11) reacts in the second half of an NCAA college basketball game against Cincinnati, Sunday, March 10, 2019, in Cincinnati. (AP Photo/John Minchillo) 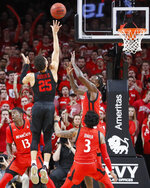 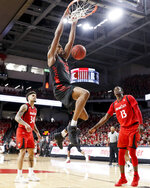 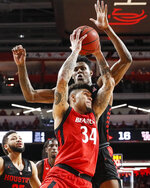 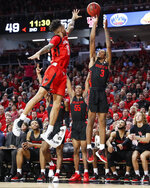 CINCINNATI (AP) — Galen Robinson Jr. raised his arms at midcourt as the buzzer sounded and red-clad Cincinnati fans headed glumly for the exits. No. 12 Houston has just drubbed the American Athletic Conference's defending champion, leaving no doubt about who's best this time around.

It's the Cougars, and it's not even close.

Corey Davis Jr. scored a career-high 31 points Sunday, and Houston dominated the second half for an 85-69 victory over No. 20 Cincinnati that clinched the AAC's regular-season title outright.

The Cougars (29-2, 16-2) knocked off the defending champs and earned their first league title since 1992 in the Southwest Conference. Coach Kelvin Sampson got a celebratory dousing from his players afterward.

"At no point in time this year did I think we were a great team, but I thought we were a pretty good team and it showed on the road," said Sampson, who had a white towel draped over the back of his soaked blue shirt.

Down by six early in the second half, Nate Hinton hit back-to-back 3s that started a 35-12 spurt. Davis' back-to-back 3s put the Cougars up by 17 points and sent Cincinnati fans headed home with 4:22 to go.

"Corey Davis is the best two-way player in this league, plays both ends with the same voracity," Sampson said. "Corey's been consistently good. He never had a bad practice, never had a bad game."

Hinton added 16 points and a career-high 11 rebounds as Houston scored at least 85 points for the fourth time in the past six games.

Last year, the Bearcats (25-6, 14-4) won the regular-season title and the AAC Tournament, beating Houston in the title game. This time, the Cougars swept the season series, winning in Cincinnati for the first time after 16 losses.

The Bearcats were outrebounded 42-28, with the Cougars getting 18 offensive rebounds. Coach Mick Cronin said the rebounding performance was embarrassing and suggested he'd invite some of Cincinnati's football players to try out after such a poor showing.

"You give a team like that extra chances, they're going to light you up," Cronin said. "There's not a whole lot to say when you get whipped that bad physically, dominated physically. The dam's going to break eventually."

The Cougars put themselves in position for a league title by beating the Bearcats 65-58 in Houston on Feb. 10, holding Cincinnati scoreless for the final 6:11.

Jarron Cumberland scored 20 points for Cincinnati on 4-of-11 shooting from the field.

Cincinnati held a slim lead through most of the first half, but Davis Jr. made a jump shot, a 3-pointer and a pair of free throws in the last 1:33 that sent the Cougars into halftime up 37-35. They missed eight of their first nine shots in the second half, and Cincinnati pulled ahead 47-41 .

Hinton hit back-to-back 3s that sparked the decisive run. The Cougars went 8 of 14 from beyond the arc in the second half while pulling away.

While Houston held its ground, the Bearcats' losses this week to UCF and Houston could knock them out of the Top 25.

Houston finally overtook the team that had dominated them until this season — Cincinnati leads the series 31-5. The Cougars also set a school record with 29 regular-season wins, topping the 28-win team from 1967-68.

Cincinnati fell to 0-4 against ranked teams on the season, the main reason they never gained much traction in the poll despite their gaudy record. The Bearcats opened the season at home with a loss against then-unranked Ohio State and concluded it with the loss to the Cougars.

The Bearcats have rarely lost an AAC home game, going 34-3 in the past four seasons. The only other losses were against Temple and Wichita State. Overall, Cincinnati is 49-5 in AAC home games since the league was formed for the 2013-14 season.

Both teams will start tournament play Friday in the quarterfinals in Memphis, Tennessee.