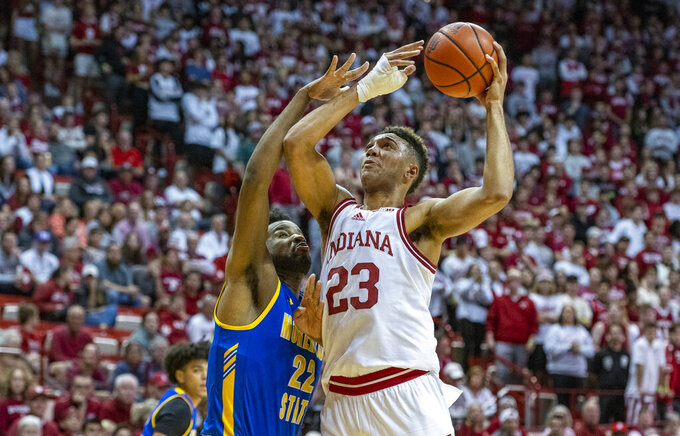 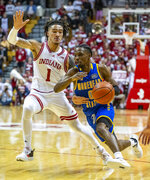 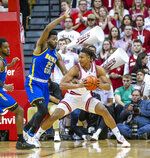 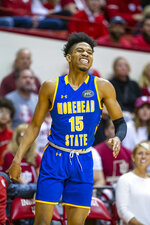 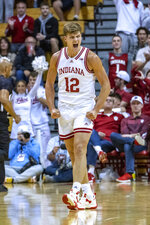 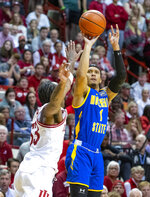 BLOOMINGTON, Ind. (AP) — Indiana star Trayce Jackson-Davis looked even better than his old self. Malik Reneau made a splash in his college debut.

Together, the preseason All-American and the highly touted freshman were quite a combination. Each scored 15 points in limited minutes and helped lead the 13th-ranked Hoosiers to an 88-53 win over Morehead State in the opener for both teams.

“He’s been solid ever since he put on the uniform,” coach Mike Woodson said of Reneau. “It's kind of nice to see.”

What Hoosiers fans saw was a team that lived up to its billing as the Big Ten's preseason favorite — especially as they dominated the final 30 minutes.

Jackson-Davis and Reneau helped Indiana's bigger, stronger and deeper roster control the middle where they had a 52-18 scoring advantage. They also helped them regain the upper hand on rebounding.

It was good enough to give the Hoosiers a sixth consecutive win in this series as they improved to 26-0 all-time against Ohio Valley Conference foes.

Mark Freeman led the Eagles with 14 points, and Drew Thelwell had 11 for the team that entered this season as the OVC favorite.

For a while, it looked as if Morehead State would make the game interesting. Freeman's four-point play midway through the first half tied the score at 21.

But then the Hoosiers responded in decisive fashion, and the Eagles had no answers.

“They are very good at protecting the paint and keeping the opponent out of it," coach Preston Spradlin said. “They’ve got a really dynamic team with their size and their athleticism, their ability to post the ball and play off the bounce.”

Indiana scored 13 straight points during a 20-4 run, which made it 41-29 at halftime. Then the Hoosiers scored the first six in the second half, extending the margin to 18 and allowing them to steadily pull away.

Morehead State: The Eagles have played ranked foes in three straight season openers and were no match against these Hoosiers. With only four returnees and 11 newcomers on this season's roster it may take Spradlin time to figure out how piece things together, but better days are ahead.

Indiana: After a solid start, the Hoosiers went into the kind of lull that drives coaches crazy. But the fact they rebounded quickly — and thoroughly — should be a promising sign for Woodson and Indiana's hungry fan base. The next goal should be to string together a full 40 minutes.

Early-season matchups like this one rarely help a Power Five team make much headway in the rankings while losses can send teams sliding. The Hoosiers accomplished what they needed to maintain their high preseason ranking heading into their second game in four days.

Morehead State: Kalil Thomas led the team with five rebounds, while Thelwell had four rebounds and four assists. ... Alex Gross, who played high school basketball about 50 miles from the Indiana campus, had eight points. ... The Eagles were 9 of 30 from 3-point range and had 21 turnovers. ... Morehead State's 46 wins over the previous two seasons were the most of any Division I basketball school in Kentucky.

Indiana: Jackson-Davis also had seven rebounds, all in the first half. Reneau had five rebounds. ... Jordan Geronimo finished with 10 points and seven Hoosiers scored at least seven. ... Indiana also had a 29-9 scoring edge in points off turnovers. ... The Hoosiers shot 61% from the field but took only 11 3s.

Indiana: Returns to Assembly Hall on Thursday against Bethune-Cookman.