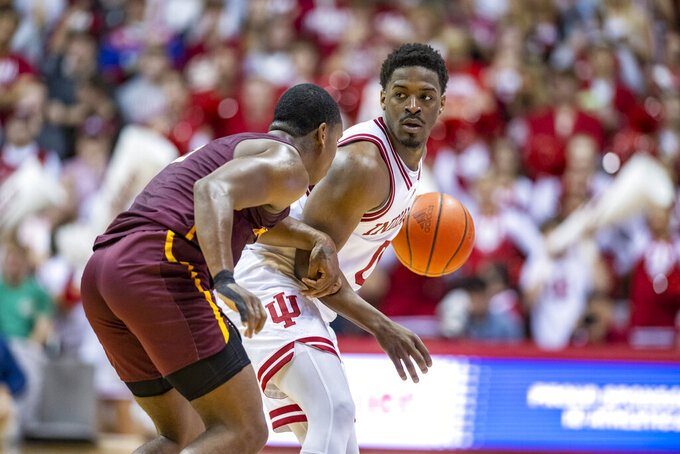 Indiana guard Xavier Johnson brings the ball up the court while being defended by Bethune-Cookman guard Marcus Garrett during the second half of an NCAA college basketball game, Thursday, Nov. 10, 2022, in Bloomington, Ind. (AP Photo/Doug McSchooler) 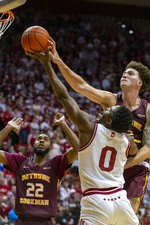 Together, they celebrated a bigger moment than any game — the Garrett family's return to Bloomington.

“How about that?” said Theus, now in his third season as the Wildcats coach. “We all went out and stood in front of the statue and took pictures, and I knew as soon as I saw his big head, I knew it was Billy's head. History is an amazing thing.”

The game was not.

Jackson-Davis played just 21 minutes and the Hoosiers made 10 3-pointers as they topped the 100-point mark. The unbeaten Hoosiers have won twice by a total of 87 points and are now 10-0 all-time against Southwestern Athletic Conference foes.

Certainly, Billy Garrett Jr. would have preferred a better result. The eldest Garrett was Indiana’s 1947 Mr. Basketball Award winner, a college All-American who went on to play for the Harlem Globetrotters and a high school coach who won one Indiana state high school title at Indianapolis Crispus Attucks, the same school Oscar Robertson attended.

The Wildcats took their only lead of the game, 10-9, on Dylan Robertson's alley-oop dunk five minutes into the game.

Miller Kopp answered with the first of his four 3s to give Indiana the lead while spurring a 20-2 run. Indiana closed the half on a 15-4 spurt to make it 49-23 and sealed the outcome with a a 15-2 run early in the second half.

“This team is competitive, just telling you,” Woodson said.

Bethune-Cookman: The Wildcats have opened against two Big Ten schools, and it hasn't been pretty. The schedule gets easier, but producing more than last season's nine wins will require substantial improvement.

Indiana: The Hoosiers' most glaring problem in recent seasons has the 3-point struggles. If they replicate this performance against better opposition, Indiana could meet — or exceed — the preseason hype.

There have been few surprises this first week, including Indiana. While the lopsided margins won't hurt their ranking, it's probably not going to help much, either.

Theus and Woodson have known each other since the mid-1980s when the two first-round draft picks became teammates with the Kansas City/Sacramento King and played 195 games together.

Theus began his career at the college level, went to the NBA for three seasons then returned to the college ranks. Woodson spent 25 years coaching at the pro level before taking his first college job.

While the Wildcats were playing, folks on their campus in Daytona Beach, Florida, were dealing with another hurricane that slammed Florida's coastline. Theus said the school has scheduled a men's-women's doubleheader Monday as a result of the storm.

“The coastline has been really beat up, but didn't go too far inland,” Theus said. “But it's the second one in a month and our university infrastructure isn't too great, so it can be pretty devastating.”

Indiana: Gets a one-week break before visiting Xavier next Friday.