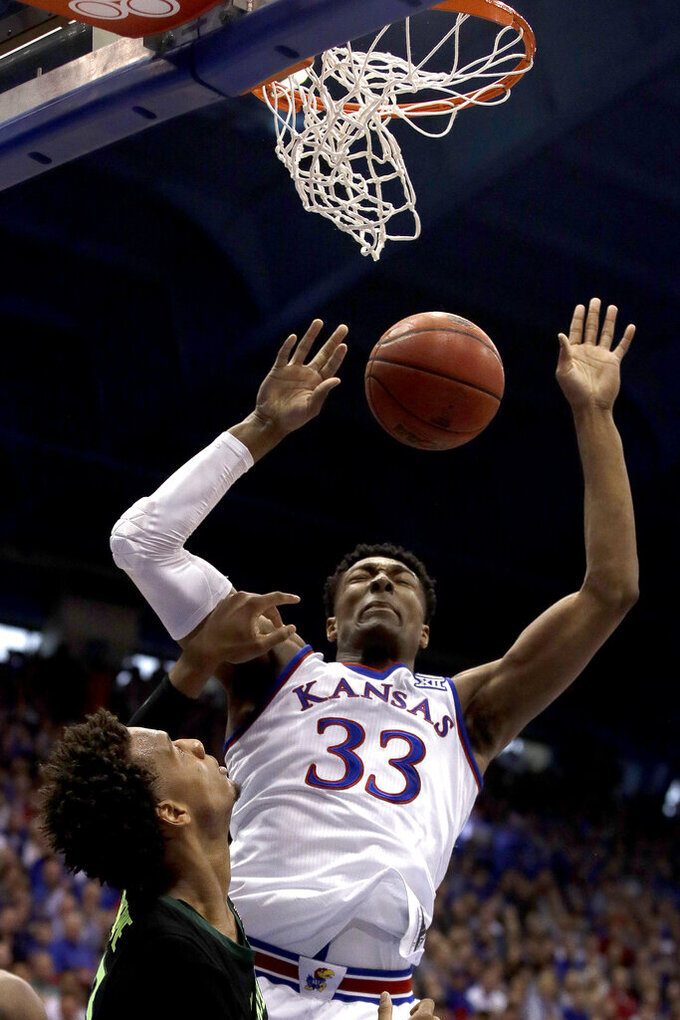 Kansas' David McCormack (33) gets past Baylor's Freddie Gillespie to dunk the ball during the first half of an NCAA college basketball game Saturday, March 9, 2019, in Lawrence, Kan. (AP Photo/Charlie Riedel) 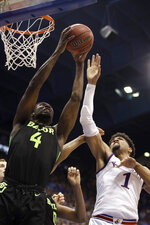 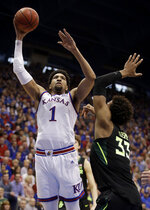 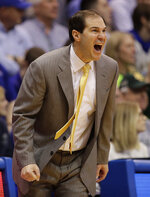 LAWRENCE, Kan. (AP) — Cutting through Baylor's long zone defense, Kansas guard Ochai Agbaji came down with the ball in the low post double-teamed by a pair of Baylor defenders. The freshman quickly offloaded the ball to fellow freshman David McCormack, who slammed the ball home over the top of Baylor's Freddie Gillespie.

The dunk was an early indication of the night McCormack would have, as the young forward continues to grow into Bill Self's Kansas squad.

"He played terrific, I should have played him more. He was our best offensive player of the first half, and he made some good, strong moves," Self said. "The first move he had he didn't go to his left hand jump hook and ended up taking a good shot, but after that I thought he was really good."

Dedric Lawson scored 23 points, including 11 of 12 from the free-throw line, to help No. 13 Kansas beat Baylor 78-70 Saturday and stay undefeated at home.

The performance came hours after Lawson was announced on the ballot for the John R. Wooden Award that goes to the nation's outstanding college basketball player.

Yet on senior night in Allen Fieldhouse, a trio of Kansas freshmen impressed. Devon Dotson, McCormack and Quentin Grimes had 15, 12 and nine points, respectively. Kansas (23-8, 12-6 Big 12) fielded no seniors for the first time since 2007. The Jayhawks' lone senior Lagerald Vick left the team earlier this season for personal reasons.

Kansas took advantage of Baylor's zone defense throughout the game, scoring 36 points in the paint. That included 18 of Kansas' 32 points in the first half. Baylor's strong rebounding presence was heavily tested, and both teams finished with 43.

"I think first half I only had two rebounds so coach was getting on me about that," Lawson said. "It's going out there and being aggressive and going after the ball and finishing plays on the defensive end."

Kansas led 32-29 at halftime. A four-point possession five minutes into the second half turned the game in the Jayhawks' favor.

Baylor forward Flo Thamba was called for a flagrant-one foul after the referees deemed he purposely pushed his hand into the face of Lawson. He made both free throws and was fouled again by Thamba after the inbounds play, with Lawson making both again.

Kansas took a 44-35 lead after the possession and maintained it the rest of the game.

"I think it was pretty big," Baylor coach Scott Drew said of the flagrant. "It's hard to come back on Kansas here; we've done it a couple of times but it's really hard to do."

With their Big 12 Tournament quarterfinal opponents already decided and neither team playing for the regular-season title, there was little at stake aside from an improved resume come Selection Sunday.

Kansas: The Jayhawks finish the season 16-0 in Allen Fieldhouse, marking the 20th time in program history that Kansas has done so. It's the first time since 2015-16 than Kansas has accomplished the feat and the seventh time during the Self era.

With his final stat line of 23 points and 14 rebounds, Lawson recorded his 20th double-double of the season. He is only the third Kansas player to record 20 double-doubles or more in the Self era, joining Cole Aldrich and Thomas Robinson.

Kansas: The Jayhawks enter as the No. 3 seed in the Big 12 Tournament at the Sprint Center in Kansas City, Missouri. They will play 6th-seeded Texas on Thursday.

Baylor: Will play Iowa State on Thursday in the Big 12 Tournament.