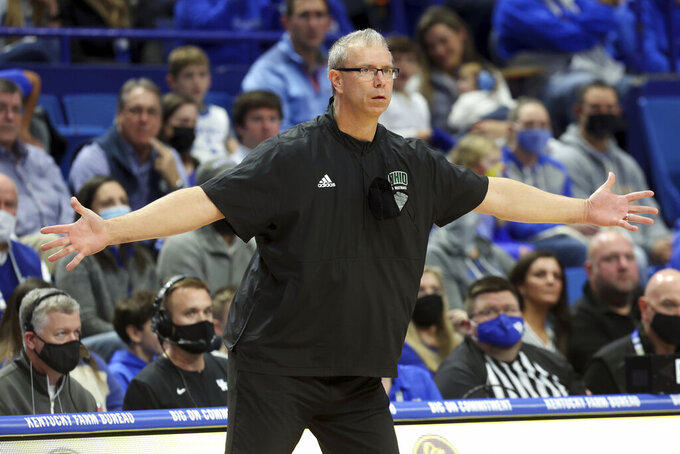 LEXINGTON, Ky. (AP) — Keion Brooks wasn’t surprised that Ohio challenged No. 13 Kentucky on Friday night. It took his 22-point game to spark the Wildcats to a 77-59 victory.

“They’re a good team,” Brooks said of Ohio (3-1). “We expected them to be good and that was our focus coming into the game, this is a quality team and if we didn’t play well, they can beat us. We knew they could beat us if we didn’t come ready.”

Kentucky coach John Calipari said it served as a learning experience for his squad.

“That team — I almost thought what in the world did I do, playing these guys,” he said. “You need tune-ups, you need tune-up games and some teams only play tune-up games. We don’t. We do have tune-ups and we have to have them on the schedule, but this game really showed us something.”

Ben Vander Plas finished with a team-high 19 points and six rebounds for Ohio, followed by Jason Carter with 15 points and Mark Sears with 10.

The Wildcats used a big second half to fend off the Bobcats, who led for most of the first half. Brooks set the tone by scoring eight of the Wildcats’ first 10 points after halftime.

Kentucky was without leading scorer and rebounder Oscar Tshiebwe in the first half because he picked up two fouls in the first two minutes. But Kentucky outrebounded the Bobcats 26-19 in the first half and limited Ohio to just one shot on most possessions with 19 defensive rebounds.

In Kentucky’s first three games, Tshiebwe averaged 18.3 points and 18.7 rebounds per game, including 20 boards in each of the first two contests. On Friday, he had two points and 10 rebounds.

“He (didn’t care) about scoring,” Calipari said. “He just goes (back in the game) and chases down balls.”

The Bobcats made five 3-pointers in the first half, paced by Vander Plas' three 3-pointers and 13 first-half points.

Ohio: Ohio ranked 10th in the nation in 3-point field goals with an average of 12 per game in its first three games. The Bobcats made eight against the Wildcats.

“We came in here expecting to win,” Ohio coach Jeff Boals said. “We had to make shots to do it.”

Kentucky: The Wildcats are in the midst of a seven-game homestead and will host Albany on Monday ahead of the Thanksgiving holiday. Since opening with an eight-point loss to No. 7 Duke to open the season, Kentucky has won three straight games by double figures.