No. 13 Michigan St forced to prepare for season without Izzo 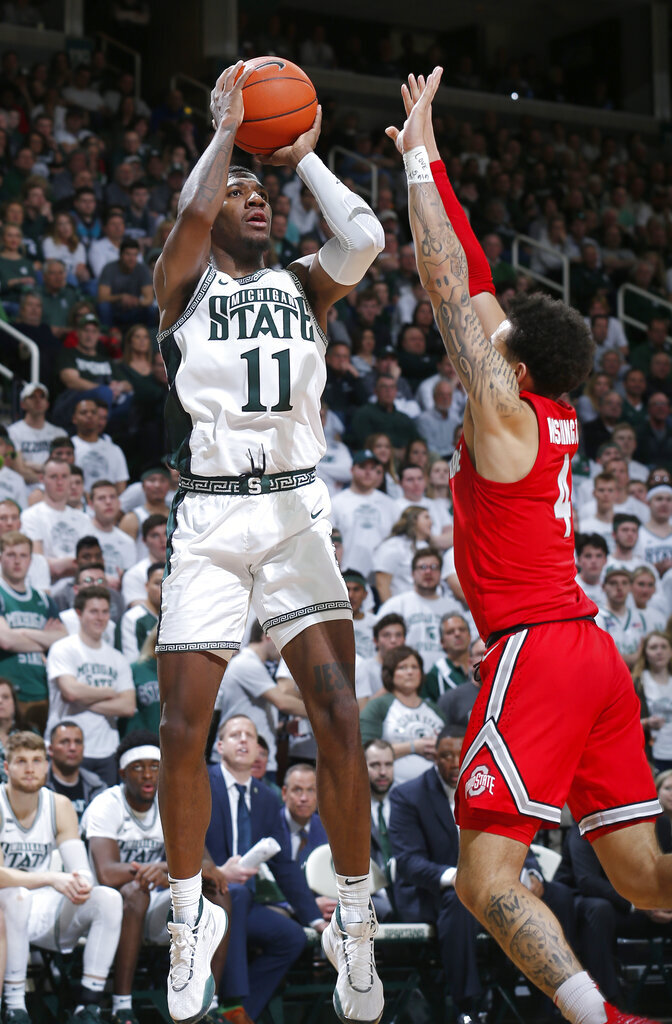 FILE - Michigan State's Aaron Henry, left, shoots against Ohio State's Duane Washington Jr. during the second half of an NCAA college basketball game in East Lansing, Mich., in this Sunday, March 8, 2020, file photo. Michigan State won 80-69. The team will need preseason All-Big Ten player Aaron Henry to produce much more than he has in the past as a role player.(AP Photo/Al Goldis, File)

Michigan State's basketball program knew it would go into the season with challenges, including playing without Cassius Winston and Xavier Tillman.

The 13th-ranked Spartans were also hit with a setback no one saw coming.

Tom Izzo tested positive for COVID-19 on Monday and his team will have to do without the Hall of Fame coach leading them in person for at least a week.

“I’m hoping my team grows a little bit when they don’t have me there," the 65-year-old Izzo said. “Hopefully, that will make us stronger when I do get back."

While Izzo is in isolation for a period of 10 days, dating to the first sign of symptoms on Nov. 7, practices will be led by associate head coach Dwayne Stephens. The former Spartans standout has been on Izzo's staff since 2003. His father, Dwayne Stephens Sr., died from the coronavirus in April and that is not lost on Izzo.

“Every day when we're talking about with our players, D.J. is sitting there, and I can't imagine how hard that is on him," Izzo said.

On the court, coping with the loss of Winston and Tillman will be difficult to overcome.

Winston was one of four players in Division I history to have at least 1,900 points and 850 assists. Tillman, who is skipping his senior season to enter the NBA draft, last season joined Tim Duncan and Bo Outlaw as the only college players since 1993 to average at least 13 points, 10 rebounds, 3 assists and 2 blocked shots.

Aaron Henry, a preseason All-Big Ten player, chose to stay in college after initially entering the draft and is projected to be the team's best player.

“I’m a small piece to the puzzle, but I’m glad to be looked at in that light," Henry said.

The 6-foot-6 junior forward averaged 10 points, 4.6 rebounds and nearly 3 assists last season for a team that was 22-9 overall record and 14-6 in the Big Ten, finishing tied for first with Wisconsin and Maryland.

Joshua Langford, who has not played in nearly two years because of foot injuries, returns as a three-time captain. The shooting guard was averaging 15 points before his career was stunted midway through the 2018-19 season. He has started 75 games over three seasons, averaging 10 points and making more than 40% of his 3-point shots.

Michigan State's most valuable player this season might prove to be Joey Hauser. The 6-9 forward transferred from Marquette and requested a waiver from the NCAA to be eligible last season instead of sitting out, but was denied. Hauser spent a year practicing with the team and working on skills and strength on his own.

“The anticipation is at all-time high right now," he said.

Hauser averaged nearly 10 points, five-plus rebounds and two-plus rebounds two years ago as a freshman. The season's schedule calls for him to face his brother, Sam, who also left Marquette and landed at Virginia.

Rocket Watts, who averaged nine points as a freshman last year, and junior Foster Loyer will likely split time at point guard in place of Winston.

“Obviously, it’s different because Cassius isn’t here anymore, because he’s a big part of our team," Langford said. “But at the same time, those guys are ready for it.”

UP IN THE AIR

Michigan State’s only scheduled game, as of Tuesday night, is Dec. 9 at Virginia as part of the ACC/Big Ten challenge.

“Normally, you’ve got an exhibition game in two weeks, another one in three weeks, and then you play," Izzo said. “It breaks it up a little bit. So we’re trying to find some things to do to kind of keep them motivated. But understand that nobody wants to practice for six, seven weeks, including the coaches, without a game."