No. 13 Penn State relies on 3-point flurry to win at Purdue 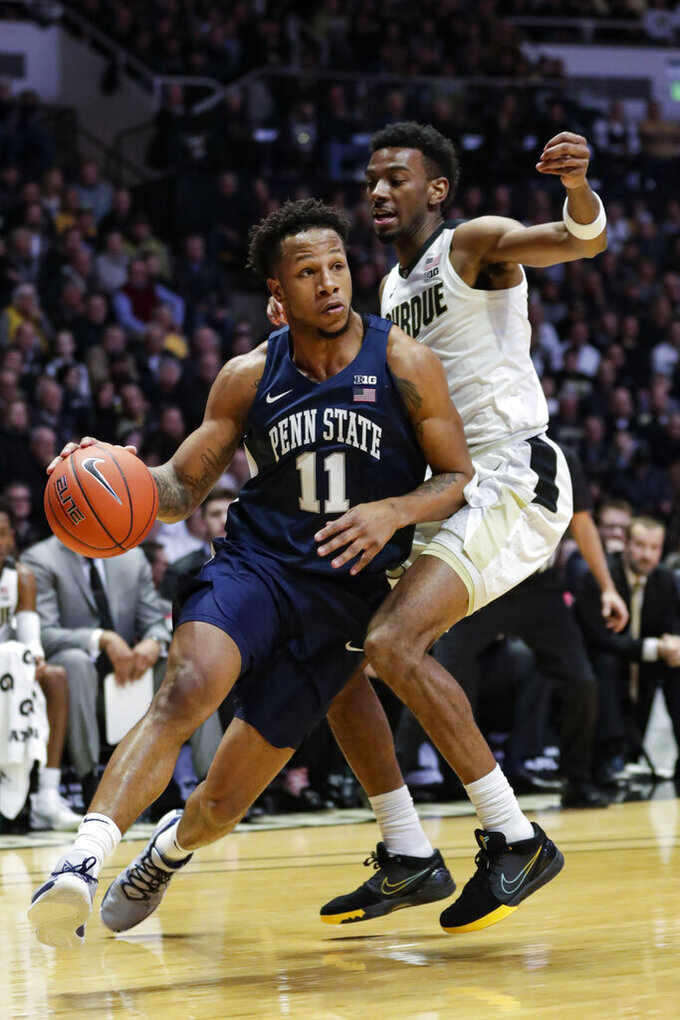 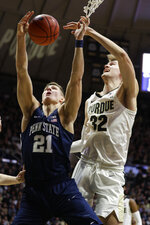 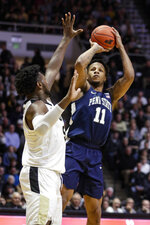 Watkins matched a season high with 19 points, Lundy added a career-high 18 and No. 13 Penn State pulled away with a rare 88-76 victory at Purdue Tuesday night.

“I've watched every team that's come in here and it's a massacre by the media timeout with six minutes to go," Penn State coach Pat Chambers said. “So we knew how important that first four (minutes) was going to be. Fortunately, we were in the lead but I just wanted to be right there.”

This win will go down as yet another monumental chapter in the Nittany Lions' remarkable season.

Penn State made a season-high 14 3-pointers, one short of the school record set against Purdue in February 2007, and extended its winning streak to seven.

And with Lundy and Watkins leading the way, they made it look relatively easy.

Lundy needed only 20 minutes to establish a new career high with four 3s as Penn State ran out to a 42-30 halftime lead. He finished with six 3s.

"We were doing what we normally do, but we weren’t getting them off the (3-point) line," Purdue guard Jahaad Proctor said. “As shooters, we know once you make a few and the team starts to get going, it's kind of contagious. We didn’t really adjust and at that point the bucket was kind of big for them and they kept knocking them down.”

Watkins, meanwhile, scored 16 points in the final 20 minutes to help Penn State double the lead to as much as 58-34.

Trevion Williams finished with 17 points and 10 rebounds to lead the Boilermakers, which had a three-game winning streak end.

But with Penn State firing on all cylinders right from the start, Purdue never had much of a chance.

With Lundy leading the way, six of the Nittany Lions' first seven baskets came from behind the arc as Penn State pulled out to a 27-16 lead.

Purdue got as close as 83-76 with 54 seconds remaining, but Penn State closed it out at the free-throw line.

Penn State: Check another goal off the list for the Nittany Lions — beating a team that had dominated this series for years. How did they do it? By making 3s, defending hard and thwarting any challenges with timely baskets. No wonder Penn State is the only Big Ten team with a winning road record in league play (5-3).

Purdue: Just when it appeared the Boilermakers may have turned their season around, they hit another low in their roller-coaster season. When they couldn't defend the perimeter, they couldn't find enough scoring punch to fight back. The result was predictable despite a 12-4 spurt that finally cut the deficit to single digits with 1:14 to go.

Purdue: Proctor and Isaiah Thompson each had 15 points. Eric Hunter Jr. scored 14. ... Tuesday marked the first meeting between a ranked Penn State team and an unranked Purdue team. ... Purdue has beaten four ranked foes, tied for the third-most in the nation, this season.

Penn State: “It's taken me a long time — nine years — to finally get a win here," Chambers said. “A long time."

Purdue: “It felt like the roles were switched," Hunter said. “Usually when people come in here, we play harder than them. Most times we shoot the ball better, but they just outplayed us, outworked us.”

Penn State: Hosts Northwestern with a chance to pick up their 20th win Saturday.

Purdue: Hopes to rebound at Ohio State on Saturday.