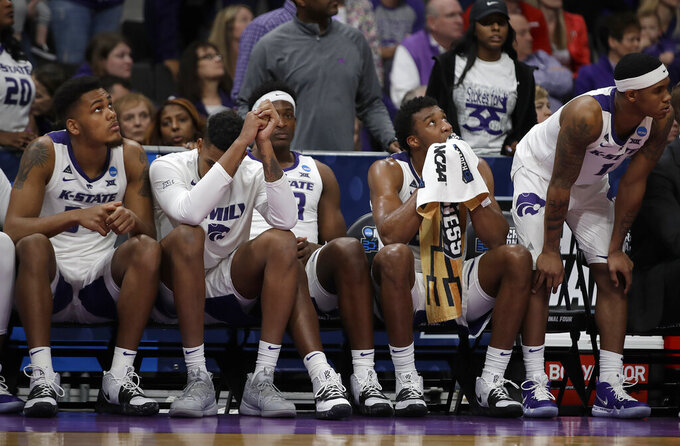 Kansas State players react on the bench during the second half of a first round men's college basketball game against UC Irvine in the NCAA Tournament Friday, March 22, 2019, in San Jose, Calif. (AP Photo/Ben Margot) 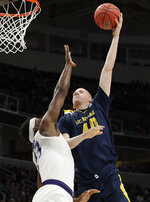 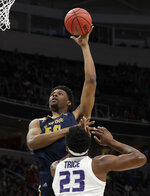 SAN JOSE, Calif. (AP) — When it comes to college basketball in California, UC Irvine is low on the totem pole.

Now the program that sometimes feels like a little brother to Pac-12 powers like UCLA and USC is the only school from the state still standing in the NCAA Tournament after pulling off a stunner .

The 13th-seeded Anteaters got back-to-back 3-pointers from Evan Leonard on Friday to spark the deciding run in a 70-64 upset of No. 4 seed Kansas State, the first tournament win in school history.

"Well, little brother has been in the weight room, getting better, getting ready for a chance like this," coach Russell Turner said. "So I'm really happy for these players to be able to work so hard for something everybody can see and then accomplish it. But I'm also really excited for the fans of our program who also seem to have endured feeling like little brothers.

"You know, we need to stick our chests out a little bit right now."

UC Irvine (31-5) had lost its only previous tournament game, 57-55 to Louisville in 2015. But the Anteaters got a longer stay this time after taking control of the game with a 12-0 run midway through the second half and then holding off the regular season co-champions of the Big 12 to earn their 17th straight victory.

Leonard and Max Hazzard each scored 19 points to send UC Irvine (31-5) into the second round of the South Region for a matchup against Oregon.

"We've had three goals all year, and that was to win the regular season championship, the tournament championship and advance in the NCAA Tournament," Hazzard said. "And that doesn't just mean one game. We have another game on Sunday, and we're planning to put ourselves in position to win again, and hopefully we can do that and play into next weekend."

One year after making a run to the Elite Eight, the fourth-seeded Wildcats (25-9) had a short stay in the tournament as they struggled to decipher the Anteaters' zone defense and missed star forward Dean Wade, who was sidelined by a foot injury. Kamau Stokes led Kansas State with 18 points.

Despite that, Kansas State led by four points midway through the second half before the two long shots from Leonard turned the tide. Robert Cartwright added another 3-pointer and Leonard made three free throws after being fouled on a 3-pointer to make it 59-51.

The Wildcats cut the deficit to two points, before Hazzard hit a corner 3 with 1:25 to play to make it 66-61 and then struck a pose to the delight of the Anteaters fans who made the trip up from Orange County.

"I just play with a lot of passion and a lot of joy," Hazzard said. "The stage doesn't get much bigger than this."

Cartier Diarra hit a 3 for Kansas State off a tip pass from Xavier Sneed and the Wildcats had a chance to tie or take the lead, but Barry Brown Jr. threw a pass away with 38.8 seconds to play.

"We wanted to do something really special," Brown said. "We did something special in our regular season, and we wanted to kind of carry that momentum over to this tournament, and just didn't execute, didn't hit some shots, didn't guard the right way we should have."

The Anteaters then sealed the game at the foul line.

UC Irvine: Despite getting blown out early last season at Kansas State, the Anteaters were confident coming into this game thanks to 30 wins and the long winning streak. They used two big runs to stay close in the first half and forced the Wildcats into 11 straight misses to end the half. Hazzard's buzzer-beater tied the game at 30 at the break.

Kansas State: Wade's injury had a big impact on the Wildcats, but they managed the long tournament run last year with him mostly as a spectator because of an injury. What hurt more was an off-night from leading scorer Brown. He played only 5:45 in the first half after committing two quick fouls and didn't make his first basket until early in the second half. He finished with five points on 2-for-9 shooting.

Stokes drew fouls on 3-point shots three times in the game for the Wildcats. He drew two in the first half against Eyassu Worku, drawing the ire of Turner. Stokes then drew another in the second half against Robert Cartwright that had Turner complaining to the official instead. Stokes made seven of the nine free throws on those fouls.

Stokes then committed a foul on a UC Irvine 3-pointer, sending Leonard to the line for three shots late in the first half.

an hour ago
By Aaron Beard 6 hrs ago
By Richard J. Marcus 11 hrs ago
By Tommy Conmy 12 hrs ago
By Eric Olson 20 hrs ago