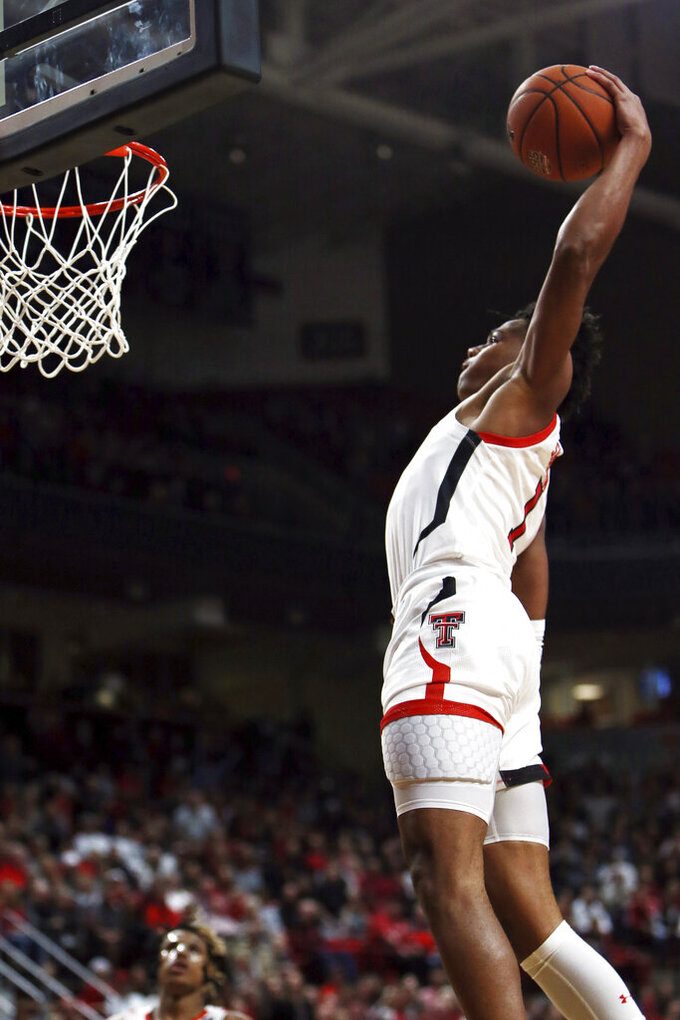 Texas Tech's Terrence Shannon Jr. (1) dunks the ball during the first half of an NCAA college basketball game against Bethune-Cookman, Saturday, Nov. 9, 2019, in Lubbock, Texas. (Sam Grenadier/Lubbock Avalanche-Journal via AP) 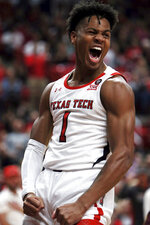 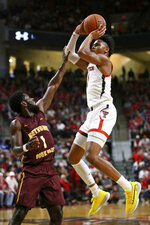 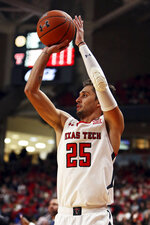 LUBBOCK, Texas (AP) — Texas Tech coach Chris Beard figured the best opportunity for his new-look Red Raiders to get better was to work on passing in practice the past few days.

They showed some progress in their second game.

"We did a better job of catching and seeing and just sharing the ball," Beard said. "So that means you're playing team basketball. You're moving the ball and that's our plan. Whether we can execute it consistently is yet to be determined, but 22 assists is an impressive stat."

The Red Raiders (2-0), who have changed drastically since last April, when they lost to Virginia in overtime in the national championship game.

Holyfield, who came to Texas Tech from Stephen F. Austin, is one of two graduate transfers. Jahmi'us Ramsey, who had 13 points and nine rebounds, is among seven freshmen.

Davide Moretti, the Red Raiders' only returning starter, had 13 points and sank three 3-pointers. He also had five assists.

"We're definitely meshing together well on the court," Ramsey said. "Everybody's doing their job so it's making it easier for everyone on the team."

Texas Tech has won its first two games by a combined 70 points. The Red Raiders never trailed and built a 40-19 halftime lead, with the final margin the largest in the game.

"Thought we played well in spurts," Beard said. "Obviously, you know Captain Obvious here, there's some times where we have to learn how to play better. Like every other team in the country, we're searching for that full 40 minutes of consistency, but I am pleased to be 2-0."

The Red Raiders' stifling defense forced Bethune-Cookman to launch plenty of shots with the shot clock expiring. The Wildcats had 20 turnovers that led to 18 points for Texas Tech.

"Obviously, we had a chance to come in here and play one of the best teams in the country and someone that our staff has great respect for," Bethune-Cookman coach Ryan Ridder said. "This gives us a great base of what to look for this year. Obviously, disappointed with the result. Turned the ball over 21 times and just couldn't get into the flow offensively."

Bailey scored eight points as the Wildcats opened the second half with a 12-6 run, getting within 46-31 on his two free throws with 14:16 left. They never got closer.

Texas Tech scored 11 in a row over the next five minutes. Holyfield had two layups and a dunk before Moretti sank a 3-pointer and made a layup to stretch the lead to 57-31.

With 7:39 remaining in the game, things got a little rough. Ramsey was fouled from behind on a dunk attempt. Red Raiders fans grew furious and wanted a flagrant foul called. Ramsey stayed down momentarily before getting to his feet. He made the second of two free throws.

Bethune-Cookman: The Wildcats showed flashes of offense in the second half. Adjustments caught Texas Tech off guard. The Wildcats played aggressively. The experience of playing a team like Texas Tech can only help for the rest of the season.

Texas Tech: Beard has loaded his team with an infusion of youth that's executing so far. The tough portion of the schedule begins in late November, so until then the Red Raiders look poised to make the most of the opportunities to grow together on the court. ... There were 11 players who got into the game — 10 scored and 10 had rebounds. The only player without a point was Andrei Savrasov, but he had five rebounds in seven minutes.

Bethune-Cookman travels to Nebraska to face Omaha on Monday night.

Texas Tech will be about 120 miles from campus to play Houston Baptist on Wednesday night in Midland, Texas. That's only time the Red Raiders play away from Lubbock in their first five games.