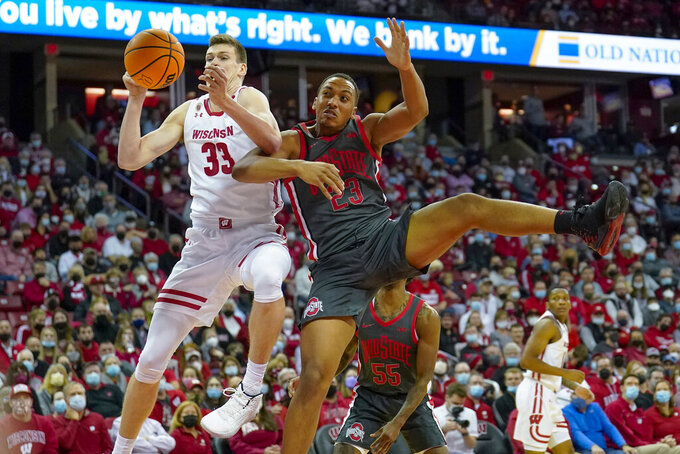 Not only did Wahl spend time guarding Buckeyes standout E.J. Liddell, he had a career-high six assists and made his first 3-pointers of the season. Wahl only scored three points in an 18-point Ohio State victory over Wisconsin in December.

“I think what it shows you is that this team is more than Johnny,” coach Greg Gard said about Davis, who averages 23.8 points per game. “I thought all along, we had some really good pieces. They weren’t household names but as this team has come together, we’ve seen some of those guys emerge.”

Davison and Wahl hit 3s in an 8-0 run to help Wisconsin take an 18-7 lead. Jahcobi Neath, a Wake Forest transfer, made a 3-pointer with 55 seconds left in the first half and the Badgers led 40-27 at halftime.

Wisconsin overcame a second-half drought that lasted 3:32. Davison’s 3-pointer ended the drought with 7:32 left, and put Wisconsin on top 59-49.

Ohio State coach Chris Holtmann said the differences in the game were the Badgers’ physicality and poise in the first half.

Add Wisconsin’s 3-point performance, and the Buckeyes couldn’t climb out of their hole.

“Davison made some tough shots,” Holtmann said. “In scouting report situations, there were some guys we were playing off who had not shown they had made a ton of 3-point shots.”

In a game when his shot wasn’t falling, Davis said the Ohio State victory was a perfect example of Wisconsin’s strength across the board. Davis added that he has confidence in competing with Davison and Wahl.

“It shows you that one player is not an entire team,” Davis said. “If either one of these guys (Davison and Wahl) would to have an off night, the other two would pick him up. That’s just how it goes with this team.”

Ohio State: The Buckeyes struggled to get into a rhythm on offense early, particularly Liddell. He shot 1 for 7 from the field in the first half, and sat for more than three minutes with two first-half fouls. ... Announced a couple hours before the game that Meechie Johnson Jr. was sidelined with a facial injury.

Wisconsin: Davis is the reigning co-Big Ten player of the week. The 6-foot-5 sophomore guard averaged 27.3 points, 10.0 rebounds and 3.0 assists per game in three victories over the last seven days.

Wisconsin: At Northwestern on Tuesday night.