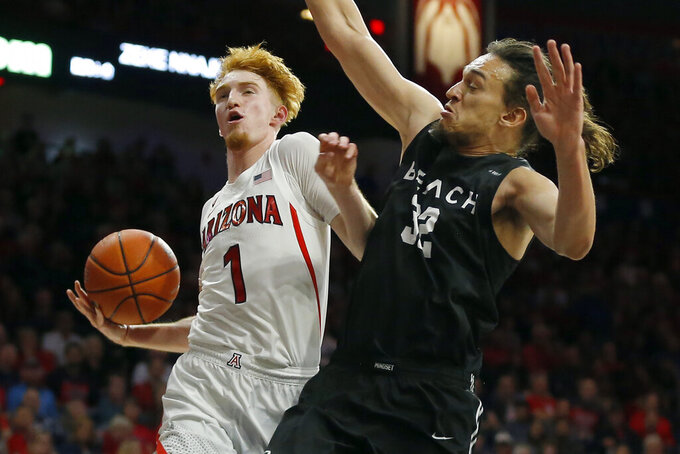 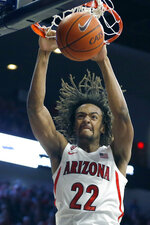 TUCSON, Ariz. (AP) — Nico Mannion wasn’t worried even though Arizona was struggling in the first half for a second straight game. That’s because the Wildcats were working hard, making the extra pass and playing good defense.

Eventually, he said, the basketball gods would take notice.

Whether it was the supernatural or simply good shooting, he was right. No. 14 Arizona rallied with a huge second half to easily beat Long Beach State 104-67 on Sunday night for their sixth straight win to start the season.

“The basketball gods look out for you when you’re playing the right way,” Mannion said. “I think we played the right way today. Sharing the ball, getting open looks.

“And when you get open looks, they start to fall.”

Mannion scored 22 points, Zeke Nnaji added 21 and Arizona poured in 66 points in the second half while shooting 67% from the field. The barrage led to a lopsided final score, which didn’t tell the story of a competitive game for much of the night.

Arizona (6-0) struggled in the first half for a second time in four days, trailing 31-30 with less than three minutes remaining in the half before rallying for a 38-33 halftime lead. Nnaji and Mannion both had 11 points before the break.

The Wildcats also trailed at halftime on Thursday before laboring to a 71-64 win over South Dakota State. This game wouldn’t be nearly as a close.

Arizona hit 13 of its first 16 shots in the second half, including 6 of 8 from 3-point range, to push the lead to 72-44 with 10 minutes left and cruise to the win. The shots kept falling even in the final seconds, when walk-on Matt Weyand nailed a 3-pointer that had the bench leaping and hollering in celebration.

Mannion shot 6 of 11 from the field, including 3 of 6 from 3-point range. The freshman added eight assists and just one turnover.

“Watching Nico, he’s slowly and steadily settling in and learning how to be a college player,” Arizona coach Sean Miller said. “Sometimes you forget it’s still November, still very early in our team’s development, especially with the younger guys.

“He was really outstanding — maybe the best game he’s played so far for us.”

Max Hazzard finished with 14 points, all in the second half. Jemarl Baker Jr. and Josh Green both added 11.

Michael Carter III led Long Beach State (2-4) with 11 points. Max De Geest and Joshua Morgan both added 10. The Beach shot 41% from the field and had 22 turnovers.

Arizona was playing its first game since guard Devonaire Doutrive was dismissed for a violation of team rules.

Miller said that several different players would have to step up in place of the sophomore, who was averaging 6.3 points per game.

Hazzard could be one and his 14 points were crucial against Long Beach State. He shot 5 of 7 from the field, including 4 of 6 from 3-point range. The 6-foot-0, 175-pound grad transfer played three seasons at Cal Irvine before coming to Tucson.

He was just 4 of 15 beyond the arc in his first five games before Sunday’s breakout.

“It felt good,” Hazzard said. “I haven’t been shooting the ball as well as I’ve wanted to so far this year. But it’s a small sample size, long season and I like my chances.”

Long Beach State: The Beach has had a tough early-season schedule, losing to UCLA, Stanford and Saint Mary’s before playing Arizona tough for a half. The losses are probably frustrating, but a young starting lineup that includes two freshmen and two sophomores is gaining valuable experience.

Arizona: The Wildcats have been a little inconsistent while leaning on three freshmen — Green, Nnaji and Mannion — for much of the production. The good news is they’re still undefeated and trending in the right direction.