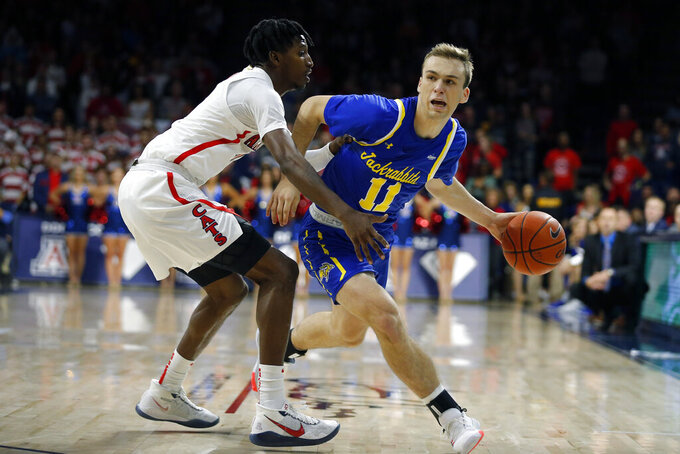 But with about a minute left and the game still in doubt, the 6-foot-3 Mannion shook a defender, drove down the center of the lane and threw down a spectacular dunk over South Dakota State’s defense.

It might have been the lone moment of basketball beauty from the 14th-ranked Wildcats all night.

But it was enough for a hard-fought 71-64 victory over South Dakota State.

“We don’t want to have a loss to wake us up,” Arizona senior Chase Jeter said. “Coming out and having to battle against a team like South Dakota State just lets us know that every team is going to compete, we have to be ready for every opponent and treat every game the same.”

Arizona (5-0) trailed for much of the first half and by three at halftime. The Wildcats finally pushed ahead 40-39 with 14:28 left when Green made a 15-foot jumper.

The basket was part of a 12-0 run that put the Wildcats ahead 46-39, and they wouldn’t trail again. Green led Arizona with 15 points but shot just 4 of 13 from the field, including 0 of 4 from 3-point range. Mannion added 14 points, including the final dunk that jolted the McKale Center crowd out of the seats.

“You don’t really feel like the game’s almost over,” Mannion said. “I was just trying to play until the final whistle.”

Arizona shot just 3 of 17 from 3-point range. Wildcats coach Sean Miller said his team was “very fortunate to win” and that his team took a lot of rushed shots that weren’t necessary.

He was particularly upset that the offense failed to regularly get the ball to the 6-foot-11 Nnaji, who was leading the nation in field goal percentage coming into Thursday after making 33 of 39 (85 percent) shots.

“If you lead the nation in anything, you are outstanding,” Miller said. “Zeke Nnaji has proven that when he gets the ball, especially around the rim, great things happen.”

Things didn’t go to Arizona’s plan early as South Dakota State jumped out to an early 24-14 lead following Noah Friedel’s 3-pointer. The Jackrabbits gave up a few buckets before another push, and Wilson’s spectacular alley-oop dunk on Dentlinger’s pass made it 28-18 with 5:59 left in the first half.

South Dakota State nearly pulled off the upset even without playing its best game.

First-year coach Eric Henderson said the Jackrabbits left “a lot of things on the table” after turning the ball over 21 times and committing 26 fouls.

“We’re going to battle, we’re going to compete,” Henderson said. “We’ve gone to places like this and won before. We’re not really in awe of the moment. I’m not really into moral victories, but I am proud of our guys and how they competed.”

It took a while, but Nnaji finally missed a shot.

The freshman grabbed an offensive rebound in the second half and missed the put-back to miss for the first time in nearly three games. Over the past three games, he’s still shooting 19 of 20 (95 percent) from the field.

South Dakota State: The two-time defending Summit League regular-season champions are rebuilding after losing most of their roster from last year, but the new group showed plenty of potential.

Arizona: The Wildcats finally faced some adversity after mostly breezing through their nonconference schedule. The test wasn’t a bad thing considering the Wildcats have games against Baylor and Gonzaga in the coming weeks.

“Tonight we almost learned the hard way,” Miller said. “We have to play smarter.”