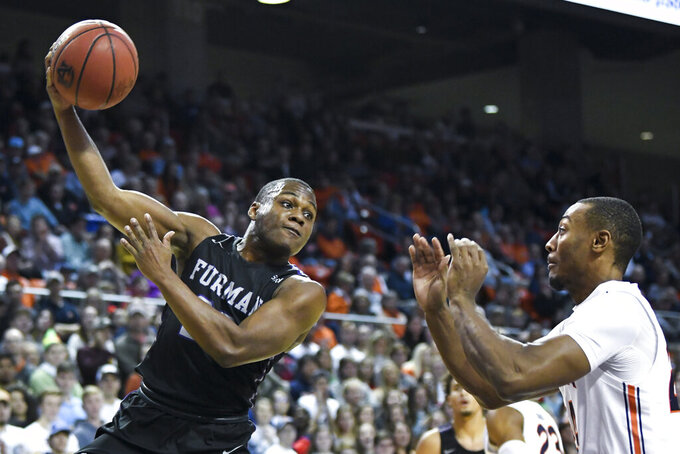 Furman guard Jordan Lyons (23) passes the ball over Auburn forward Anfernee McLemore (24) during the first half of an NCAA college basketball game Thursday, Dec. 5, 2019, in Auburn, Ala. (AP Photo/Julie Bennett) 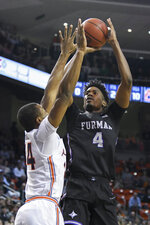 AUBURN, Ala. (AP) — Bruce Pearl's message to his team was that No. 14 Auburn had been outcoached and outplayed, and that it does happen sometimes.

The Tigers nonetheless survived for an 81-78 overtime victory over Furman on Thursday night with smothering second-half defense.

Christian Okoro scored a season-high 18 points, including two free throws with 1.6 seconds left in overtime to help the Tigers (8-0) complete a rally from a 14-point second-half deficit, easily their largest of the season.

Samir Doughty scored on a drive with 15 seconds left but Mike Bothwell drilled a 3-pointer for Furman (7-3), which quickly fouled Okoro.

The freshman made both foul shots and Bothwell missed a final heave from before half-court.

Auburn won despite a cold-shooting night from Doughty, who scored 13 points but missed all seven 3-point attempts. The Tigers were 4-of-25 in 3-point shooting.

Noah Gurley led Furman with 21 points and eight rebounds before fouling out with 2:31 left in overtime, when Wiley made a basket and free throw. Clay Mounce added 14 points before also fouling out.

The Tigers tied it 66-66 on two straight layups by J'Von McCormick's over the final 1:05 of regulation. The second came with 14 seconds left and then Bothwell lost control of the ball on the other end with 5 seconds left.

McCormick missed reverse layup attempt at the buzzer after he juked a defender off his feet, sending the game to overtime.

Furman: Finished a four-game road swing with a near-upset. The Paladins started a 20-2 run late in the first half, opening up a 46-32 lead with 16 minutes left.

.Auburn: Trailed at the half for only the second time this season and its previous largest deficit was six points in the last game against Richmond. Had an eight-minute drought without a field goal.

PUGH'S SPARK Jaylon Pugh came in with 19 points in the first six games, all off the bench. He scored all 11 of his points by halftime, including back to back 3-pointers in a 28-second span during Furman's closing run. Those two 3s matched his season-high coming into the game, six points.