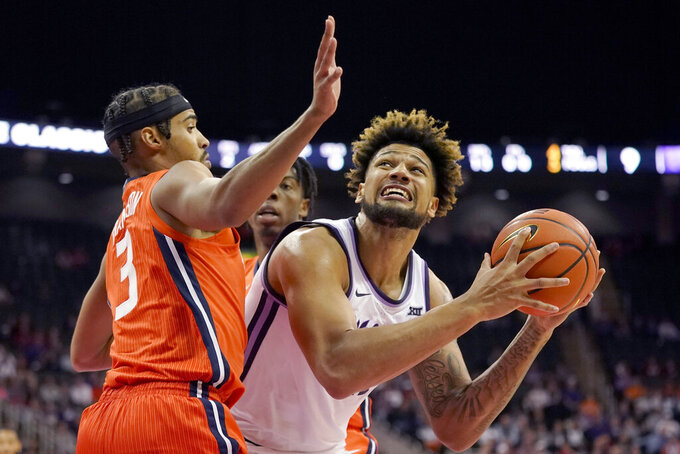 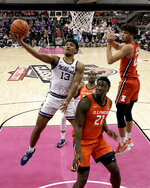 KANSAS CITY, Mo. (AP) — Kofi Cockburn missed the first three games of the season for Illinois for violating NCAA rules, and Alfonso Plummer might as well have missed them given the way his normally reliable shot kept bouncing out.

Both of them made their presence known Tuesday night.

Cockburn bruised his way to 23 points and 13 rebounds in his second game back, and Plummer hit seven 3-pointers and added 21 points as the No. 14 Illini held off Kansas State 72-64 in the consolation game of the Hall of Fame Classic.

Plummer finished 7 of 9 from beyond the arc, and the Illini (3-2) went 12 of 26 from 3 as a team, as they bounced back from a 71-51 blowout loss to Cincinnati in the semifinals to avoid their third consecutive loss.

The victory Tuesday night came at a cost, though: Trent Frazier, who scored 23 points against Marquette but was held scoreless by the Bearcats, hurt his left knee midway through the second half. The Illini guard was 0 for 5 from the field but had five assists when he was helped to the locker room by a pair of trainers.

“I don't have anything yet,” Illinois coach Brad Underwood said.

Markquis Nowell scored 19 points and Nijel Pack had 15 for the Wildcats (2-2), who committed just four turnovers for the entire game. Ismael Massoud added 13 points after going 0-for-everything against Arkansas in the semifinals.

“They made a couple more plays than we did and we weren't able to get back in the game. That's just how it goes sometimes,” Massoud said. “We have to learn from it. Try to get better each day.”

There were plenty of subplots to the first meeting of Illinois and Kansas State in 21 years.

Underwood grew up in McPherson, Kansas, and played two seasons for the Wildcats under Jack Hartman. Underwood later returned to Manhattan to spend six seasons as an assistant to Bob Huggins and Frank Martin.

As for Weber, he spent nine seasons coaching the Illini, leading them to two Big Ten titles and the national championship game in 2005. The Illini haven't won a regular-season conference championship since he left.

There also was Kansas State guard Mark Smith, who began his career at Illinois before a pit stop at Missouri, making him doubly loathed by the orange-clad Illini faithful. But he ignored their boos to score a couple early baskets and dish out a couple of assists, helping the slow-starting Wildcats stay within 34-31 at halftime.

They briefly pulled ahead 42-41 before Massoud and Mike McGuirl had back-to-back lay-ins rattle out. Plummer hit a 3 at the other end to give Illinois the lead back, and it eventually grew to 50-42 with 10 minutes remaining.

When Pack drilled a 3-pointer for the Wildcats, Plummer was right there to answer with another for the Illini. His sixth 3 pushed the lead to 62-49, the biggest of the game, and Plummer added one more late for good measure.

“I knew I was kind of off early in the season,” he said, “so I had to find a way to help the team. I was working extra hours in the gym. When I made the first one, I felt like I was back. I had that confidence. I'm glad that happened.”

Illinois still wasn't at full strength even before Frazier got hurt. Andre Curbelo remained slowed by the concussion that he sustained earlier this year, finishing with six points and seven assists while playing only 20 minutes.

“We haven't been together in a long, long time, and you know, when it’s key pieces — you're talking about one of the elite backcourts in the Big Ten that wasn't a part of that in crunch time,” Underwood said. “We need to get healthy.”

Kansas State forced the Illini into 17 turnovers and turned them into 23 points, while Illinois only forced four turnovers that led to three points. That disparity was the biggest reason why the Wildcats were able to mount a challenge.