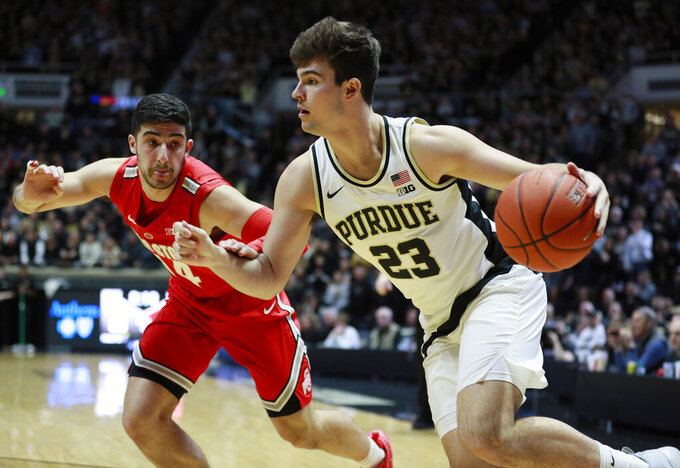 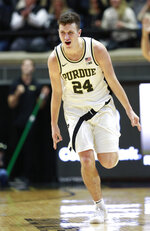 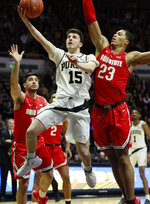 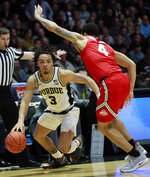 WEST LAFAYETTE, Ind. (AP) — Purdue leading scorer Carsen Edwards has struggled from the field in the second half of the Big Ten season, including a recent two-game stretch when he was made 7 of 40 shots.

Edwards has returned to form in the past two games. The junior guard set the tone Saturday by scoring 25 points on 9-of-16 shooting, helping the No. 14 Boilermakers beat Ohio State 86-51 to take sole possession of first place in the Big Ten.

"I took what the defense gave me and I was able to make some shots," said Edwards, who hit half of his eight 3-point attempts. "I was trying to come out aggressive and I was able to move without the ball. I got some good passes from my teammates with the screens they set for me."

Purdue coach Matt Painter said teams have defended Edwards differently, so he has to adjust.

Matt Haarms had 12 points and Aaron Wheeler added 10 for the Boilermakers (22-7, 15-3). It was the final home game for senior starters Ryan Cline and Grady Eifert, who each scored eight points.

"It was probably one of the better games we played all year," Painter said.

Edwards scored 19 of his points in the first half to help the Boilermakers to a 48-20 halftime lead.

"We knocked down some shots, we played good defense," Painter said of the first half. "We did a good job of executing."

Purdue sank 55.9 percent of its shots. The Buckeyes hit just 33.3 percent. The Boilermakers also made 11 3-pointers compared to two for Ohio State.

"I was disappointed with how we performed," Buckeyes coach Chris Holtmann said. "We should probably do a better job of getting our guys ready to go. They hit some tough shots, but that's just what they do."

The Boilermakers engineered a 16-2 run, including 11 straight points, to lead 32-13 during the first half.

"We got a big lead and we never looked back from there," Cline said. "Once we were making shots, we were just tough to guard."

The Buckeyes played without leading scorer and rebounder Kaleb Wesson, who was suspended Friday for a violation of athletic department policy. He is expected to return this season, Holtmann said.

Holtmann said the Buckeyes missed his defense most of all.

"The gap behind his defense and the other guys' defense at that position is seismic," Holtmann said. "That's where we struggled."

Purdue: The Boilermakers sank 11 of 21 3-pointers.

Ohio State: The Buckeyes have two regular season games and the Big Ten Tournament left to make its case for an NCAA Tournament bid.

Purdue: A loud cheer went up in the first half when it was announced Purdue's in-state rival Indiana upset Michigan State 63-62. With two regular season games to go, the Boilermakers hold a one-game lead over Michigan State and Michigan. Michigan State hosts Michigan on March 9.

Ohio State: Plays at Northwestern on Wednesday and hosts Wisconsin on March 10.

Purdue: Closes regular season with road games at Minnesota on Tuesday and Northwestern on March 9.