No. 14 TCU has stable roster and highest preseason ranking 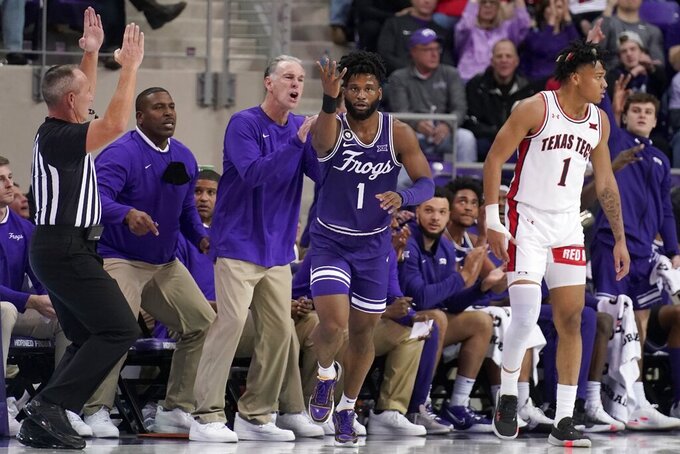 FORT WORTH, Texas (AP) — Jamie Dixon might have the most stable roster in the nation, which is quite a transformation for a TCU program that went through a couple of overhauls before landing its highest-ever preseason ranking this fall.

The 14th-ranked Horned Frogs, with preseason Big 12 player of the year Mike Miles Jr., return all five starters and five other scholarship players. They had consecutive wins over top-10 teams late last season to solidify a spot in the NCAA Tournament, then missed getting to the Sweet 16 after an overtime loss to Arizona.

This is Dixon's seventh season at his alma mater, which before last March hadn't won an NCAA Tournament game since 1987, when he was a senior guard for the Frogs.

“I know people thought I was crazy when I talked about expectations when I first got here," Dixon said.

Right away, the Frogs had three consecutive 20-win seasons and made their first NCAA tournament in two decades. But there were many questions when they slipped after that.

Their 16-16 record in 2019-20 was the first time Dixon didn't have a winning record — he was at Pittsburgh from 2003-16 before going to TCU. There were seven newcomers the following season, when the Frogs were 12-14 before a more extensive overhaul as Dixon embraced the transfer portal.

Eight transfers were added before last season, though several early injuries slowed their progress. All but one of them is back, with the only newcomers being Oklahoma State transfer guard Rondel Walker and highly touted freshman signee PJ Haggerty.

“You saw a team getting better and better. ... We've made great strides,” said Dixon, who lauded the benefits of summer workouts coaches can now have with their teams. “Everybody got better, because most of them were out there almost the entire time.”

Miles, a 6-foot-2 junior guard, averaged 15.4 points and 3.8 assists last season. He and 6-11 center Eddie Lampkin Jr., both Texas kids who joined the program before the 2020-21 season, are the only scholarship players other than Haggerty who began their college careers at TCU.

“We know with the work we put in the reward is going to come out,” Miller said. “We compete at such a high level at practice that we know what we’re capable of.”

Three other Big 12 teams are ranked above TCU in the preseason AP poll: Kansas and Baylor, the last two national champions who are tied for fifth, and No. 12 Texas. Those are also the three teams picked ahead of the Frogs in the preseason poll as voted on by the 10 coaches

One of the transfers last season was Shahada Wells, a 6-foot guard from Texas-Arlington. One of their best guards in offseason workouts, he played only seven games while dealing with a knee injury before the Frogs redshirted him to get him healthy for this season.

“He’s one of our best shooters. He’s becoming a very good defender," Dixon said. "He’s our smallest guard. We’ve talked to him about him being more physical, trying to play bigger. But he’s got great hands, very active on the ball, and just a great kid.”

TCU has 12 games before facing the Big 12′s other three ranked teams from Texas in the first 12 days of conference play. The Frogs play their league opener on New Year’s Eve at home against No. 25 Texas Tech, then go to No. 5 Baylor, host Iowa State and play at No. 12 Texas. Eight of their dozen games before that are on campus, with another only a few blocks away at Dickies Arena. They will be in Florida after Thanksgiving to play California, then Clemson or Iowa. They take on Utah in Salt Lake City a few days before Christmas.