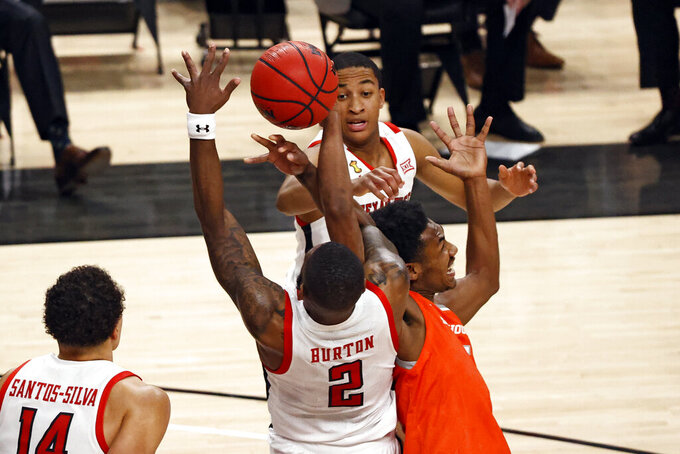 LUBBOCK, Texas (AP) — Mac McClung is already doing for No. 14 Texas Tech exactly what he told coach Chris Beard he would after transferring from Georgetown.

McClung had 18 points to again lead the Red Raiders in scoring as they improved to 2-0 with an 84-52 victory over Sam Houston State on Friday.

“We knew what we were getting into when Mac was coming, he's a scoring guard,” said Terrence Shannon Jr., one of Tech's returning players. “He's doing well out there right now. ... We’re happy for him scoring the ball well.”

Marcus Santos-Silva, a graduate transfer, had 12 points and nine rebounds in 19 minutes to just miss out on another double-double. He is the only Texas Tech senior after starting all 64 games for VCU the past two seasons. Shannon had 10 points as the Red Raiders shot 50% percent from the field (26 of 52) and led by as many as 38 points.

McClung, the leading scorer for the Hoyas last season, has 38 points in 41 minutes of action in his first two games for the Red Raiders. The 6-foot-2 junior guard is 13-of-21 shooting, including 4 of 6 on 3-pointers. In the first eight minutes against Sam Houston State, he had two 3-pointers among 10 points as Tech already had a 20-4 lead.

“Mac's playing the game the right way. He’s not forcing anything. He’s trusting the offense, he’s trusting his teammates. He’s trusting himself,” Beard said. “He came in here is a guy that has an edge second to none. ... He’s the ultimate competitor, but also an unbelievable teammate.”

McClung scored 20 points in a 101-58 win over Northwestern State in his Tech debut, when Santos-Silva had 10 points and 13 rebounds while playing 18 minutes in that game Wednesday.

Zach Nutall had 14 points to lead three players in double figures for Sam Houston State (0-2), which shot only 31% from the field (17 of 54). Demarkus Lampley added 12 points and Bryce Monroe had 11.

“I thought we were a little intimidated and I thought their defense was so good that it took us out of what we wanted to do, and it took Zach out of the game, which I knew that was what they were going to try to do,” coach Jason Hooten said. “We’re not good enough yet when someone plays like that to figure out that second or third option, or take advantage of something they’re not doing.”

Nutall was coming off a 36-point game in the Bearkats’ season-opening 97-67 loss at SMU two nights earlier, when he was 12-of-23 shooting and had six 3-pointers. But he missed all six of his field-goal tries and had only four free throws at halftime against Texas Tech, where he finished 5-of-17 shooting overall and was 0 of 3 on 3s.

Sam Houston State’s roster has nine newcomers, five junior college transfers and four freshmen, and had pauses during preseason practice because of COVID-19 issues. Nutall, a junior guard, is the only of four returning lettermen with more than one letter.

Sam Houston State: Hooten called three timeouts in the first 10 1/2 minutes of the game, the third when the Bearkats were already down 18 and Nutall had missed his first five shots.

“I really was disappointed in the start. I still think we've got a few guys with the deer in the headlights look," Hooten said. “I just think we'll be better. We'll be better for it.”

Texas Tech: Texas Tech has three transfers among their seven newcomers in McClung, Santos-Silva and sophomore guard Jamarius Burton from Wichita State. Burton had eight points and three rebounds. ... The Red Raiders are 62-9 at home under Beard, who is in his fifth season with the Red Raiders.

After two lopsided wins, their third game in five days will be more of a test when the Red Raiders play No. 17 Houston on Sunday, before playing St. John's.

“These two games, we’re going to learn a lot about our team through the great competition,” Beard said. “There’s an unselfishness and a flow to our team right now. It's fun to watch.”