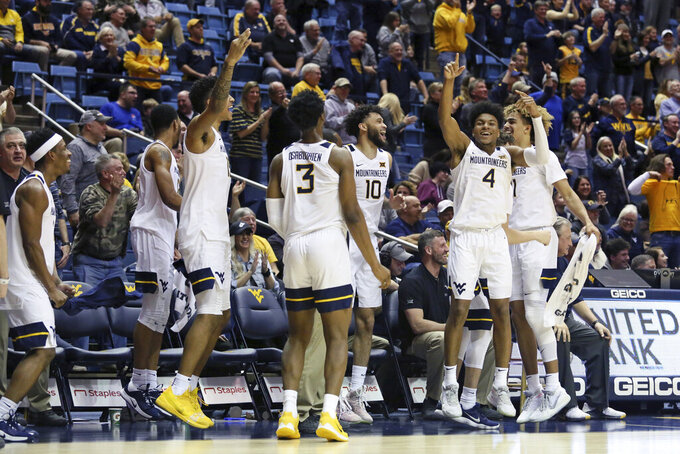 West Virginia players celebrate after a score against Texas during the second half of an NCAA college basketball game Monday, Jan. 20, 2020, in Morgantown, W.Va. (AP Photo/Kathleen Batten)

MORGANTOWN, W.Va. (AP) — Oscar Tshiebwe sprinted the length of the court to chase down an errant Texas inbounds pass. While the home crowd implored him not to touch the ball, Tshiebwe grabbed it anyway just before it reached the corner end line, took one dribble and slammed the ball through the net.

It was that kind of night for both the Mountaineers and the Longhorns, who limped through the fifth-worst loss in program history and the worst under coach Shaka Smart.

Tshiebwe had 13 points and 11 rebounds, Derek Culver scored 13 points, No. 14 West Virginia jumped to a big early lead and coasted to a 97-59 victory over Texas on Monday night.

Tschiebe, a former McDonald's all-American, is one of the nation's top freshman rebounders and is West Virginia's leading scorer. Midway through the second half the 6-foot-9, 260-pounder showed off his running skills.

“That feels great,” he said. "I didn't know I was going to catch that. I just said let me try. They say, the more you try the easier you're going to make it. Actually, I ran so fast and I got it. I looked back and no one was close, I said, 'I'm going to go dunk the ball.'"

His teammates were impressed.

“We're not going to forget how he ran the ball down when it was almost out of bounds,” Culver said. "I don't understand how he did it. Oscar just took off."

Jermaine Haley added 12 points and Jordan McCabe scored 10 for the Mountaineers (15-3, 4-2 Big 12), who bounced back from a lopsided loss at Kansas State that cost them a spot in the top 10 this week.

The Longhorns were out of this one pretty early.

Only Sims eventually fouled out, but the Mountaineers used a lopsided advantage in free throws during a 20-0 run that gave them a 43-15 lead 2 minutes before halftime.

Smart has seen this type of lopsided loss before. Monday marked the two-year anniversary of Texas' 35-point defeat to the Mountaineers in Morgantown.

“I've got to do a better job of getting our guys ready to stand up to them in a game like tonight,” Smart said. "We didn't have the level of fight we needed to have for a lot of things on both ends of the floor."

Coach Bob Huggins had chided his players for not heeding his warning about locking down Kansas State, which scored 84 points against one of the nation’s top defenses on Saturday.

West Virginia listened to him against Texas. The Longhorns were held to 36% shooting for the game.

“For a one day prep, I thought we did a really good job," Huggins said. "We pretty much did what we asked them to do. We didn't get beat to loose balls, we got beat to every loose ball the other day.”

"If we can keep them at single digits we can keep winning big," West Virginia forward Emmitt Matthews said.

Huggins picked up his 875th career Division I victory. With his next win, he'll tie Kentucky's Adolph Rupp for seventh place all time.

Texas: The Longhorns had kept the game close for the first seven minutes, then started bleeding fouls. They committed 18 turnovers for the game, set a season low for first half points scored (20) and gave up the most in a game all season.

West Virginia: Nine players scored at least seven points. The Mountaineers outrebounded the Longhorns 53-25 and had a 27-4 advantage in second-chance points. West Virginia improved to 9-0 at home.

RIDE FOR THE KID

Easily the game's loudest ovation was for freshman walk-on Spencer Macke, a crowd favorite who scored his first career 3-pointer with 23 seconds left in the game. His teammates carried him on their shoulders off the court.

Matthews had struggled mightily with a combined 16 points over the seven previous games. He scored six in the first five minutes Monday, made his first 3-pointer in over a month and finished with eight points.

Texas hosts LSU in the Big 12/SEC Challenge on Saturday.