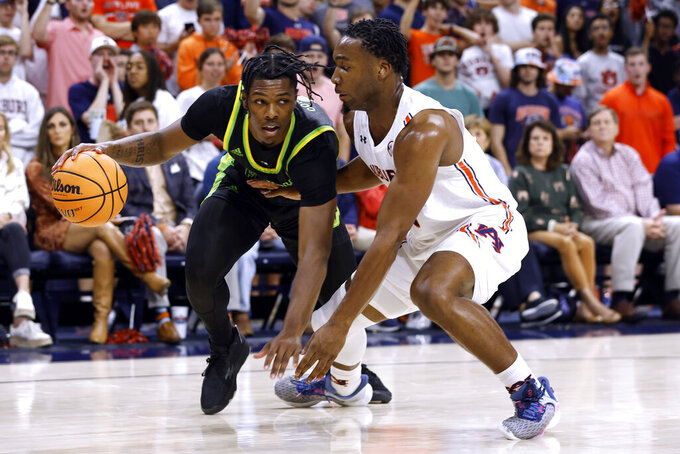 AUBURN, Ala. (AP) — Wendell Green Jr. scored 20 points and Allen Flanigan added 18 to help No. 15 Auburn overcome a cold offensive first half in a 67-59 win over South Florida on Friday night.

Auburn trailed by as many as nine points early in the second half before storming back to take the lead on a 12-2 run that was keyed by back-to-back baskets from Flanigan.

“I thought South Florida was the more excited team to play,” Auburn head coach Bruce Pearl said. “They out-hustled us. ... I challenged my players physically, and I thought they responded.”

All but two of Green’s points came after halftime. After shooting 25% from the field and 14% from behind the arc in the first half, Auburn hit 53.6% of its shots in the second half.

“Our defensive energy stepped up, and that led to offense,” Green said. “We were in transition more. I don’t think we hit too many shots, but we were getting to the basket, looking for contact and trying to finish through it.”

The comeback victory was the Tigers’ 40th consecutive home non-conference win inside Neville Arena. Auburn (2-0) is now 50-3 in such games under head coach Bruce Pearl.

“We did a lot of good things — tremendous effort on the offensive glass, tremendous effort in transition,” South Florida coach Brian Gregory said. “But guys, you’ve got to make your free throws. We’ve lost two games because we’re shooting 50 percent from the free-throw line.”

South Florida: Despite the loss, Friday was an inspired response from the Bulls, who lost to Southeast Missouri State at home on the opening night of the season. South Florida has consistently been a strong defensive team under Gregory, but improvement in scoring and rebounding against a ranked team will be encouraging.

“Disappointed in the loss, obviously,” Gregory said. “But we can build off of this.”

Auburn: The Tigers’ defense has been strong to start the season, but their offense needs major improvement. Auburn has struggled to find a consistent offensive rhythm after the departure of national Freshman of the Year award winner and No. 3 overall NBA Draft pick Jabari Smith.

“We’re not really good offensively right now,” Pearl said. “Our defense is going to have to carry us, which it did tonight.”

Friday night looked a lot like the previous game between Auburn and South Florida. Last November, the Tigers trailed by seven points at halftime and needed a strong second half to beat the Bulls 58-52 in Tampa.

“Eerily similar to last year,” Pearl said. “I knew South Florida would do a good job of guarding us. ... I thought it would be a low-scoring game. We weren’t sharp, and give them credit for it. We didn’t execute.”

Flanigan’s 18 points were the most the senior wing has scored in a single game since March 6, 2021. After an injury to his Achilles tendon caused him to miss the first 11 games of the 2021-22 season, Flanigan struggled to find his offensive form for most of his junior year.

But Flanigan found his shooting stroke Friday night, hitting six of his 10 shots and going 3-of-6 from 3-point range.

“It felt good, being able to go out there and see the rim again, see the goal and see shots falling,” Flanigan said. “It was a blessing.”

Auburn hosts Winthrop on Tuesday, the third of four consecutive home games to start the season.