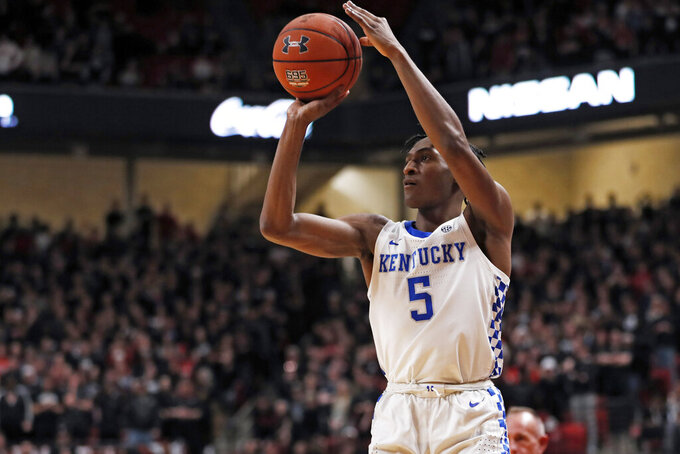 Kentucky's Immanuel Quickley (5) shoots the ball for three points during the first half of an NCAA college basketball game against Texas Tech, Saturday, Jan. 25, 2020, in Lubbock, Texas. (AP Photo/Brad Tollefson)

LUBBOCK, Texas (AP) — While there were a lot of happy players in the Kentucky locker room, only Nick Richards got a kiss on the forehead from coach John Calipari.

“I said there are about three of you in this room that need this, but I will do it for you, so I kissed him on the forehead," Calipari said of the the 6-foot-11 junior forward who had 25 points and 14 rebounds as the No. 15 Wildcats won 76-74 in overtime at No. 18 Texas Tech. “Nick was unbelievable."

Richards scored the last five points in regulation for the Wildcats (15-4), and their first five in overtime before his two game-deciding free throws with 10 seconds left in the only Big 12/SEC Challenge game featuring two ranked teams.

“We have no chance of winning without Nick,” said Immanuel Quickley, who had 21 points.

The Wildcats built a 10-point lead in the second half, and still led by eight when Richards made a jumper with 6:15 left. They missed their last six shots in regulation, none by Richards, though he made three free throws in that closing stretch. He then had two free throws to start overtime before a three-point play.

Richards finished 7 of 10 from the field and 11 of 14 on free throws, including the clinching two after he was fouled when Terrence Shannon missed on awkward shot when defended by EJ Montgomery.

When asked what he was thinking on the clutch free throw, Richards said, “I'm thinking we need it. We need these free throws to help us win the game." That included some encouragement from Quickley after an early miss that made him angry.

Texas Tech (12-7), which had won 54 consecutive non-conference home games since December 2013, had one last possession. But Davide Moretti was stripped by Hagans when starting a drive in the lane.

“We're not into moral victories around here. Just a couple of months ago we were playing for the national championship,” Texas Tech coach Chris Beard said. “We expected to win the game, but congratulate Kentucky, played with a lot of poise, they were the more aggressive team in overtime."

Kyler Edards had 18 points for the Red Raiders, while Moretti had 15 and Shannon 12.

Quickley's 21 points included a buzzer-beating 3-pointer from halfcourt that put Kentucky up 36-34 at halftime.

Eight-time national champion Kentucky never trailed again after five points in the final five seconds of the first half. Tyrese Maxey made a contested one-handed floater before Chris Clarke's deep inbound pass went out of bounds with 1.6 seconds left. Montgomery then inbounded to Quickley, who took one dribble and let go of the shot from the half-court line.

But the Red Raiders, who made it to their first national championship game last year, tied the game with their opening shot of the second half. Moretti twice tied the game late in regulation with free throws, though the 92% shooter missed the first of two from the line with 18 seconds left.

Texas Tech missed another potential go-ahead free throw in overtime after Kevin McCullar was fouled when making a layup that made it 74-all with 31 seconds left in overtime.

Kentucky: The Wildcats held on for an impressive road win in a raucous sold-out arena. While they blew the 10-point lead, they still improved to 257-7 when taking a lead of at least 10 points in a game in coach John Calipari's 11 seasons.

Texas Tech: The Red Raiders hadn't lost a non-conference game at home since LSU, another SEC team, won there Dec. 18, 2013. They had been 34-0 in four seasons under Beard. Their 54-game non-conference home winning streak was second to Butler's 58 in a row.

The only other time Kentucky had played at Lubbock was in 1965, and some tickets for this game were going for around $400. The teams hadn't played since 1994 during an in-season tournament in Cincinnati. Kentucky has a 5-0 series advantage.

“This was great. We drove by the tents last night. I wanted them to see that, you know, you bring out the best in people. Like, 'here they come.' Let me say this, I've been to all kinds of different arenas,” Calipari said. “This was a classy crowd. I've been to arenas where I don't want to take my team back ... They were all over it for their team. They didn't care about us.”

Kentucky is back home and back in SEC play against Vanderbilt on Wednesday night.

Texas Tech plays the second of three consecutive games against Top 25 teams. The Red Raiders host No. 14 West Virginia on Wednesday night before playing at No. 3 Kansas next Saturday.