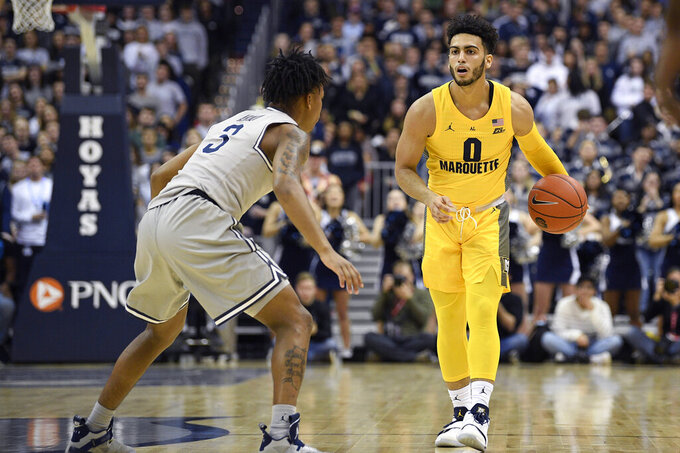 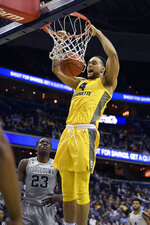 WASHINGTON (AP) — Earlier in the season Marquette coach Steve Wojciechowski claimed that 6-foot-8 junior Sam Hauser didn't really have a position. On Tuesday he got to test his theory out on the road in Big East play.

Hauser had a career-high 31 points and eight rebounds to go along with being the primary ball hander as No. 15 Marquette earned a 74-71 last minute victory over Georgetown as Markus Howard — the nation's fourth leading scorer at 25.8 points per game — played just three scoreless minutes due to lower back tightness.

"Sam doesn't have a position," Wojciechowski said about Hauser who is listed in the Marquette game notes as a guard-forward. "If there was a position for him it would be titled winner. He's a winner and I didn't think Sam was going to let us lose tonight."

Hauser's jumper in the paint gave Marquette (15-3, 4-1 Big East) a 72-70 advantage with just over a minute remaining and his free throws with 2.7 seconds left proved the game's final points.

"We lose (Howard) and somebody else has got to fill that role so I figured I might as well do that and I did it tonight," Hauser said as Marquette has now won four straight after dropping their league opener.

Theo John tied a career-high with 14 points and blocked Georgetown's James Akinjo's drive with four seconds left. Akinjo finished with eight points but shot just 1 for 10 from the field.

Sacar Anim and Joey Hauser each added 10 points for Marquette.

Georgetown (12-6, 2-3) was led by Mac McClung with 24 points while Jessie Govan added 14 points and nine rebounds and Kaleb Johnson added 12 points off the bench. McClung's desperation 3-point heave from half court was off the mark.

"We had our opportunities at the end but we just didn't play smart," said coach Patrick Ewing as Georgetown has lost three straight to Marquette.

Howard took two of Marquette's first three shots but went to the sideline early and attempted to stretch out his back but never returned. He had a career-high 53 points at Creighton on Jan. 9 to set a school and Big East scoring record.

"I'm not sure how serious it is," Wojciechowski said about Howard's back. "He's been experiencing some low back soreness. I'm not going to put a guy out there unless he's 100 percent especially Markus. We wanted to give it a try and he did not look like Markus so we're not going to put him jeopardy."

Hauser, the team's second leading scorer, scored 22 of his points in the second half once he realized Howard would not return.

Marquette, which trailed by as many as eight, took control midway through the second half after a 14-0 run gave them a 57-51 lead with 10:27 left. The Hoyas went over five minutes without scoring.

Georgetown's Trey Mourning played for the first time since suffering a concussion in a win over Appalachian State on Dec 18. Mourning had started the Hoyas first 11 games of the season and posted career-highs of 27 points and 12 rebounds against Campbell.

Marquette: The Golden Eagles, who have won four straight conference games for the first time since 2013 when they finished 14-4, will now have to wait to see how long Howard is sidelined.

Georgetown: With three freshman in the starting lineup, the Hoyas are under .500 after five conference games for the third straight season and have now lost eight straight games to ranked opponents going back to 2017.

Marquette: Returns home on Sunday to face Providence, which has started just 1-3 in conference play.

Georgetown: Wraps up a three game homestand by hosting Creighton on Monday.