No. 15 USC shakes off slow start to rout Arizona State 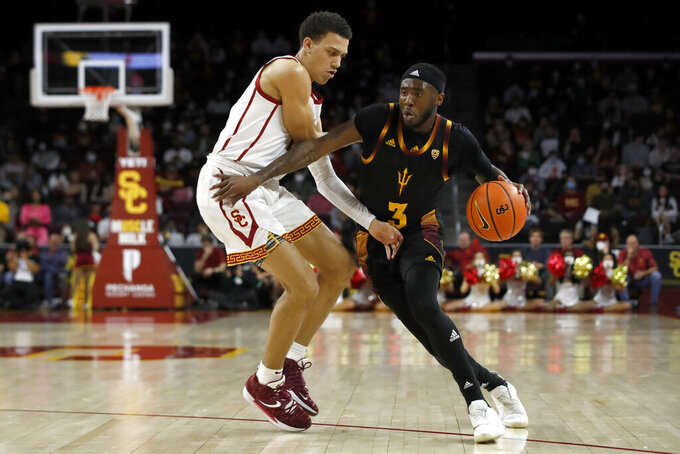 About 10 minutes after the game ended, the Galen Center was evacuated after USC's Department of Public Safety received a bomb threat. The arena and the area around it was reopened 45 minutes later after the Los Angeles Police Department investigated and confirmed there were no credible threats.

The Trojans (17-2, 7-2 Pac-12), playing their third game in five days, fell behind by 12 midway through the first half. They missed 15 of their first 18 shots and committed eight turnovers in the first 14 minutes before turning things around.

“It was a good team win. We struggled on offense at the start, but after that we started sharing the ball. We played good team basketball on both ends the rest of the game," Trojans coach Andy Enfield said. “Arizona State is a very dangerous team because they shoot a lot of 3s. We did a nice job taking care of the basketball and increasing our defensive intensity after a tough start.”

It was the second straight game that Peterson has led the Trojans in scoring. The 6-foot-9 senior had 23 points in last Saturday's win at Utah and has shot 15 of 18 from the floor the last two games, including 7 of 8 on 3-pointers.

Marreon Jackson led Arizona State (6-11, 2-5) with 21 points — including five 3-pointers. Jalien Graham had 15 and DJ Horne scored 14. The Sun Devils, who have dropped five of six, were without coach Bobby Hurley and guard Jay Heath after both were suspended one game by Pac-12 commissioner George Kliavkoff for verbally confronting officials after Saturday’s 79-76 loss at Stanford.

Arizona State was also missing forward Kimani Lawrence due to injury. The Sun Devils shot 34.4% from the floor (22 of 64), marking the third time in the past five games they shot under 35%. They also were outrebounded 49-24.

“They wore us down during that run. We were locked in early. We got off to a fast start, but we really just needed probably one more body to kind of keep the intensity up,” assistant coach Joel Justus said.

Graham’s jumper with 6:19 remaining in the first half gave Arizona State a 22-10 lead before USC stormed back with 16 straight points to grab the lead. The run included four straight 3-pointers — two apiece by Mobley and Reese Dixon-Waters — before Boogie Ellis’ jumper put the Trojans on top 24-22 with 3:34 left.

This was the first time USC was able to have fans at a home game since Dec. 15. Only families and guests of players and coaches were permitted to attend games against Oregon State and Oregon due to COVID-19. USC returned to in-person classes on Monday after the first two weeks of the spring semester were conducted remotely.