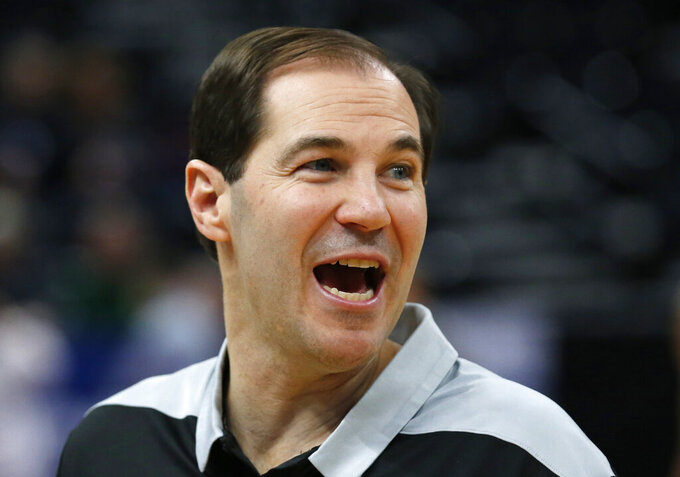 FILE - In this March 20, 2019, file photo, Baylor coach Scott Drew talks to his team during practice at the NCAA college basketball tournament in Salt Lake City. The Big 12 coaches picked Baylor to finish second in the league behind Kansas. (AP Photo/Rick Bowmer, File)

The No. 16 Bears had a little more time to prepare for the unexpected loss of a starter this time.

While Clark is back and the 6-foot-10 junior forward was picked by coaches for the preseason All-Big 12 team, versatile Mario Kegler chose to skip his final season of eligibility and pursue a professional career after he was indefinitely suspended from the team in late September.

"Mario was going to be a big piece to our team this year. He had three 20 (point)-plus games in the Big 12, fourth-year college guy. It definitely hurts," coach Scott Drew said. "Just like when Tristan went down last year, you got to adjust. Next man up mentality. At least it's before the season so we have more time to adapt with that."

Kegler, the former Mississippi State transfer who missed his first six games at Baylor after being suspended at the start of last season, was one of the primary players who stepped up after Clark had season-ending surgery. The injury-riddled Bears still won 20 games before a loss in the second round of the NCAA Tournament.

Big 12 coaches picked Baylor to finish second in the league behind Kansas, and the Bears should get stronger through non-conference play. Clark isn't the only player coming back from surgery: Senior Freddie Gillespie (shoulder) and sophomore Matthew Mayer (hip), both 6-foot-9 forwards, will also be working back into action.

"With those three guys coming back I definitely know as a coach we'll be much better as they get game experience because they haven't had the practice time this summer," Drew said.

"He's been back in the fold of things. But he's not a 20-10 guy right now. Hopefully he gets to that," Drew said. "The recovery time, it's been a long time. It's going to take him games to get that rust off, get back to playing how he was."

"I know we have good chemistry, we really like the guys," Drew said.

Gillespie knows the Bears might have to change a few things offensively and defensively to make up for the loss of Kegler, who started the final 28 games last season. But the returning forward doesn't believe any team really replaces players.

"No two players are the same," Gillespie said. "We don't have to replace him, but we have guys that will step up."

THE BUTLER DID IT

Butler's best game as a true freshman was his 31 points at Kansas, the most by any visiting player against the Jayhawks last season. He averaged 12.9 points when starting the final 20 games after Clark got hurt. Overall, Butler had 2.7 assists per game, leading the team with 60 made 3-pointers and ranking second with 33 steals. The top recruit originally went to Alabama in the summer of 2018 before getting his release and joining the Bears before last season.

The Bears' season opener is Nov. 5 at home against Central Arkansas, a game that starts before noon on a Tuesday. They then leave for Alaska to play Washington, which just missed a preseason Top 25 ranking. Baylor has back-to-back home games in December against No. 21 Arizona and Butler, and opens Big 12 play Jan. 4 at home against Texas.

"As a group we feel confident that we'll have a lot of opportunities with our schedule to show people what kind of team we can be," Drew said.