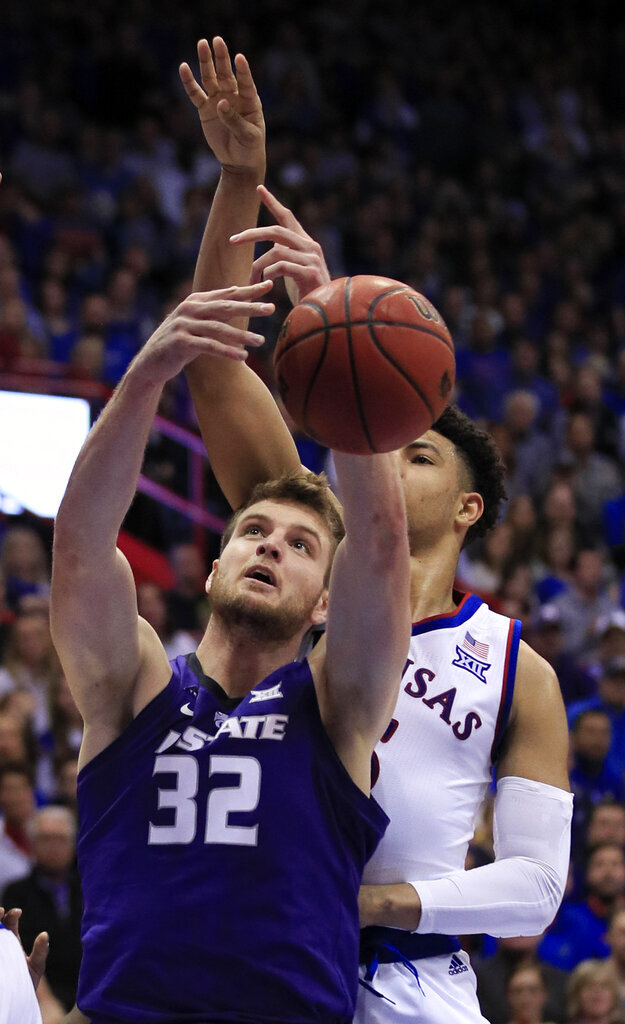 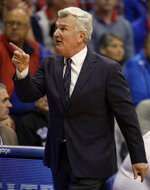 Even before his team lost in Allen Fieldhouse, Kansas State coach Bruce Weber was gazing past the high-profile showdown with rival Kansas to a crucial matchup with Baylor.

He didn't mention it to his team, of course. But Weber made it clear to his staff.

Win or lose against the Jayhawks — and the No. 16 Wildcats on Monday night lost in decisive fashion — the game against the Bears could make or break their Big 12 title hopes. They remain tied with Texas Tech for the conference lead with three games to go, both teams a game ahead of Kansas, and holding serve at home against the up-and-coming Bears is vitally important.

"I told our staff that. I said it to our staff a week ago," Weber said. "But I'm always worried. I was worried about Oklahoma State — I cussed them out at shoot-around and they were lights-out."

"We are in first place, we have a three-game season, eight days," he added. "What are we about?"

Few teams have been in this position before, mostly because the Jayhawks have won or shared the last 14 conference titles. But if the Wildcats or Red Raiders can run the table, it would mean the glass bowl awarded to the regular-season champions would reside somewhere other than Lawrence.

But the Bears (19-9, 10-5) are also a game back in the standings after squeaking out a victory over Texas earlier this week, and three straight wins have them right in the mix, too.

"They're very physical, play hard. We know," Weber said. "It's game-by-game and that's all you can do. We have to get ready to face Baylor. That has to be our immediate focus."

It's been hard to prepare for anybody lately.

The Wildcats were so banged up a couple weeks ago that they didn't even have enough bodies to have a full practice. And while some of the illnesses and nagging injuries are getting better, three of their crucial pieces remain sidelined when Weber rolls the balls out for a workout.

Senior forward Dean Wade, the league's preseason player of the year, is dealing with a foot injury that has caused him problems all season. He hasn't practiced in weeks as Weber tries to keep him on the floor for games, and even then it's been clear that Wade is not 100 percent.

He was held to eight points on 2-of-7 shooting by the Jayhawks, and his inability to push off his ailing foot reduced him to a spot-up shooter rather than a lanky forward capable of getting to the rim.

His backcourt running mate, Kamau Stokes, also has been dogged by injuries the last few weeks, and he ends up standing next to Wade during most practices. He also has been able to grit through games, but he was held to 12 points in 35 minutes against the Jayhawks.

"When you don't' practice, you don't have rhythm," Stokes said, "and that's always tough in that sense. But you have to prepare the same as any other game."

Good luck with that.

"It's not like riding a bike," Weber said. "You don't ride a bike for 30 years, you jump on a bike and you know how to do it. Basketball is about rhythm and balance. But I'd rather have them in the games than not have them play. My hope is we get (Wade) and Kam back for practices next week."

Then there is Cartier Diarra, the Wildcats' top guard off the bench. He was critical in their home win over the Jayhawks, but had surgery on his hand afterward and has been sidelined down the stretch.

Diarra has been cleared to do conditioning work, and he can run and jump like normal, but doctors have yet to clear him to use his shooting hand. That could come sometime next week.

"I don't want to get everyone's hopes up," Weber said. "A week from now, the goal is to see how the pain threshold is. Do another x-ray or whatever on it. But he's made progress. He's done a good job."

The hope, Weber said, is to have Diarra back for the Big 12 and NCAA tournaments.

By that point, the Wildcats hope to have already celebrated a championship.

"Last year the Big 12 had, what, four teams in the Sweet 16, three in the eight and one in the four? So that's pretty good," Weber said. "But you saw the games this week, it's triple-overtime, it's overtime and overtime. There's really good balance, and a couple of those games were with teams at the bottom of the league. Nobody is quitting. Everybody is playing."