No. 16 Michigan stays unbeaten with 84-73 win over Maryland 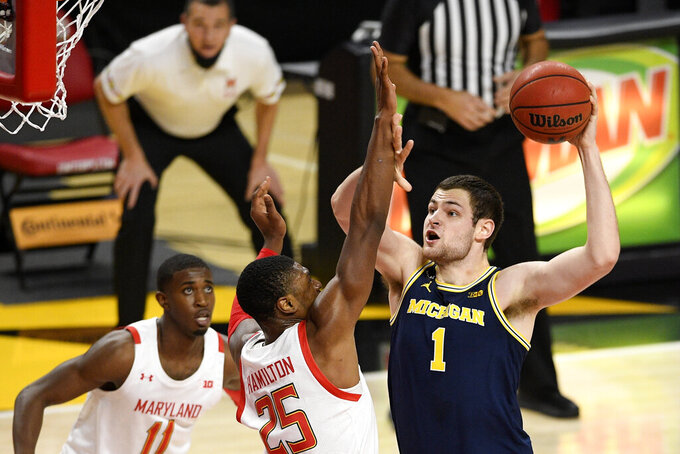 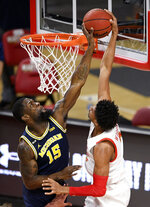 COLLEGE PARK, Md. (AP) — There's one big reason why No. 16 Michigan is the only unbeaten team in Big Ten play: Hunter Dickinson.

The 7-foot-1 freshman has played only eight games, yet it's become increasingly clear that he's going to be force in the conference this season.

Dickinson had 26 points and 11 rebounds, Franz Wagner scored 19 and the Wolverines pulled away in the second half against Maryland to secure an 84-73 victory Thursday.

The Wolverines (8-0, 3-0) trailed 54-50 with 15 minutes left before Dickinson scored nine points in a 23-5 run that turned a close, contentious contest into a runaway.

Four technical fouls were called during a first half, including one on Dickinson.

“Hunter is a competitor," Michigan coach Juwan Howard said. “That was one of the reasons I recruited him — because he loves basketball and is competitive."

Dickinson went 10 for 11 from the floor and 6 for 7 at the line in reaching a season high in points.

Dickinson played for DeMatha High School, located a few miles from the University of Maryland. Earlier in the week he said, “I did feel a little disrespected when I wasn’t recruited by them."

Thus motivated, Dickinson put on quite a performance.

“It was a lot of fun," he said. “Hopefully I showed them the guys down the road are pretty good."

Donta Scott scored 19 for Maryland, Eric Ayala had 16 and Jairus Hamilton added 15. The Terrapins (6-3, 1-3) were trying to build on Monday night's upset at No. 6 Wisconsin, but didn't have enough muscle in the middle to handle Dickinson.

After trailing by as many as 10 points in the first half, Maryland took its first lead, 47-46, on a 3-pointer by Aaron Wiggins with 18:31 remaining.

It was 54-50 before Wagner buried a 3-pointer to spark a 10-0 spurt that included a three-point play by Dickinson.

Maryland clawed back to 60-59 before the Wolverines peeled off 13 straight points to decide the issue.

“It’s not our first rodeo. We’ve been punched in the mouth before this season when teams have gotten on certain runs," Howard said. “We talk about it all the time, mental toughness. We did a real good job of staying the course."

Maryland coach Mark Turgeon found consolation in watching his team hang with perhaps the best team in the Big Ten.

“We were up 54-50 against a team playing at an extremely high level," Turgeon said. “We played with great confidence. We just couldn’t guard them."

Early on, Michigan dominated, taking a 16-7 lead while Ayala made his first three shots and his teammates went 0 for 8.

It was 25-16 when Turgeon walked the sideline to midcourt and exchanged words with Howard. The referees stepped in and called a technical foul on each team.

The fray seemed to ignite the Terps, who followed a free throw by Dickinson with a 13-4 run to close to 30-29.

Minutes later, Turgeon was called for a technical foul after he pulled off his mask to argue a foul call. And not long after that, Dickinson received a technical for pointing at the Terrapins' bench after sinking a hook in the lane.

“The ref thought I said something," Dickinson explained later. “I opened my mouth to say something, but didn’t."

Michigan was 15 for 16 at the line in the first half and Maryland was 3 for 4, which offset the Terrapins 9-for-11 shooting from beyond the arc.

The Terrapins lost starting guard Darryl Morsell late in the first half when he was struck in the side of his head by an elbow under the basket. He was treated on the sideline and did not return.

Michigan: Dickinson is a force in the middle who can carry the Wolverines a long way this season.

Maryland: The Terrapins didn't win, but their strong performance — combined with the upset at Wisconsin — shows they can compete with the big boys in the Big Ten. “That was a heck of a team we just played. The last two teams we played could be Final Four teams," Turgeon noted.

Michigan: Returns home to face No. 19 Northwestern on Sunday night.

Maryland: Hits the road for the third time in four games, at Indiana on Monday night.