No. 16 Tennessee holds on to beat Georgia 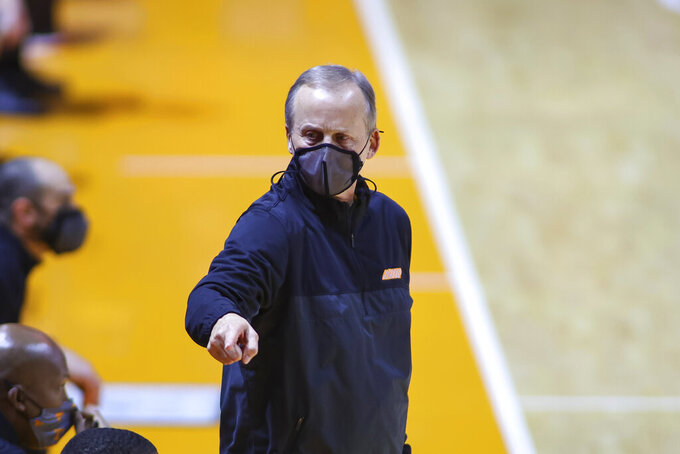 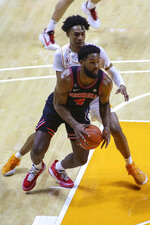 KNOXVILLE, Tenn. (AP) — As the game gets faster, the results get better for Jaden Springer.

The Tennessee freshman has had back-to-back career highs in wins over Kentucky (23 points last Saturday) and Georgia Wednesday night. Springer scored 30 points to lead the 16th-ranked Volunteers (14-4, 7-4 Southeastern Conference) to an 89-81 victory over the Bulldogs (12-7, 5-7).

“I've gotten more comfortable now that we're playing at a faster pace,” Springer said. “When you play faster, you take more shots (Springer made 9 of 11 from the field, including 3 of 4 3-pointers). You end up putting up more points and finding open shots.”

“Jaden is able to score from all three levels,” said Vols coach Rick Barnes. “He's learning a lot about his game.”

Tennessee was playing without 6-foot-6 senior Yves Pons, who is nursing a right knee injury. Pons, a leader in rebounds and blocked shots, had scored 69 points in the last five games.

Without that size, the Vols went with several four-guard combinations to go with inside player John Fulkerson.

“(Tennessee) had more open shots, especially in the first half,” said Georgia coach Tom Crean. “We didn't communicate well. In the second half, we were able to attack better (on offense). We went to the rim better and got more aggressive.”

Shots that fell in the first half for the Vols rimmed out early in the second. Tennessee built its lead to 23, 51-28, in the first couple minutes of the second half. From there Georgia's defense became effective.

Springer helped Tennessee recover by hitting two free throws and a 3-pointer to get the lead back to 19 with just over 11 minutes to play.

It took four minutes for the Bulldogs to chip away and narrow the gap to 67-54. A three-point play by Johnson was key in the run.

Johnson had a couple driving baskets with just over a minute to play to cut Tennessee's lead to six, 79-73.

It didn't get any closer.

Leading by five midway through the first half, Tennessee went on a 9-2 run, fueled by Springer who had six of his 12 first half points.

Barnes said that Pons hasn't practiced since early January, but he continued to play until Wednesday night.

He is expected to be ready for Saturday's game at LSU.

“He worked hard to play (against Georgia), but couldn't go,” Barnes said. “If he's in the game, he gives us rim protection.”

James, a sophomore, has been counted on to help nurture Springer and fellow freshman Johnson.

“The coaches will be tough on the young guys,” James said. “If they're having a bad day, I'll come up and tell them it will get better.”

Georgia: It took 19 games (12 in the SEC), but the Bulldogs finally played their first ranked team this season. The schedule gets tougher when visit No. 11 Alabama. The Bulldogs have survived by the pack mentality. They have seven players averaging between 13.6 and 9.2 points a game.

Tennessee: Last Saturday's win at Kentucky may have been a significant turning point for Springer and Keon Johnson. The two combined for 50 points and, in the process, went from good to great. How that carries over into the Vols' stretch drive will be critical to their success.

Georgia: The Bulldogs will go from the frying pan into the fire. After a road trip to Knoxville to play Tennessee, one of five teams battling for second place, Georgia will go back on the road Saturday to take on SEC leader Alabama.

Tennessee: After a COVID-19-necessitated switch (Georgia instead of Florida, which is on a pause) Wednesday, the Vols venture to Baton Rouge Saturday to play LSU, one of five teams in contention for second place.