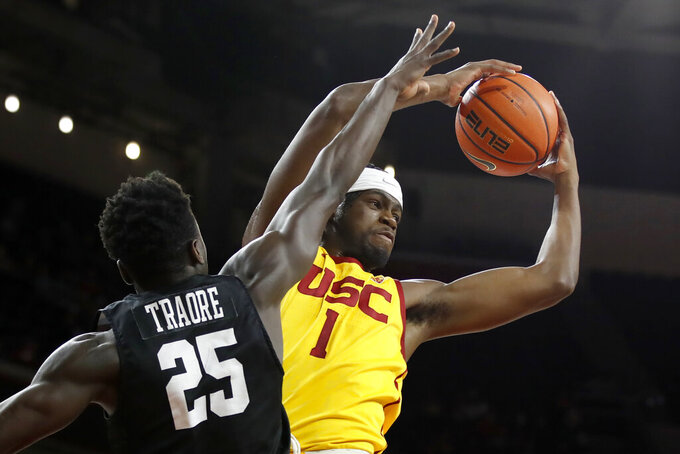 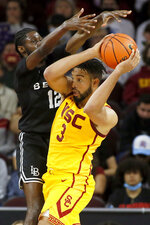 LOS ANGELES (AP) — Southern California played the first half before realizing an age-old axiom in college basketball: Don't underestimate your opponent, no matter who they are.

Led by Isaiah Mobley's 21 points and 12 rebounds, the 16th-ranked Trojans pulled away at the beginning of the second half on their way to a 73-62 victory over Long Beach State on Sunday.

“These teams come in and think it's their Super Bowl,” said Drew Peterson, who added 15 points for USC. “One game can kind of set us back big time, so we knew we had to lock down. Thankfully, we answered right away.”

The Trojans (10-0) continued their best start since the 2016-17 season, when they opened 14-0. Max Agbonkpolo had 11 points, and Mobley had his fourth double-double in five games.

Joel Murray led the Beach (3-7) with 14 points. Colin Slater added 12 points and Romelle Mansel had 10 points, including three dunks in the second half, and seven rebounds.

Neither team led by more than seven points in the first half. The Beach outscored USC 12-9 to lead by three before Peterson hit a 3-pointer that beat the halftime buzzer for a 38-all tie.

“We made our point at halftime as a coaching staff and we moved on,” USC coach Andy Enfield said. “You can’t take it for granted. You have to go out and perform.”

The Trojans did just that, opening the second half on a 14-0 run, with six points from Mobley and five by Chevez Goodwin, to take a 52-38 lead.

“It’s another good learning experience for us,” Peterson said. “We don’t want it to cost us a big game down the stretch. It’s always good getting some adversity and seeing how we withstand that.”

Long Beach State missed its first six shots of that half before Slater hit a jumper. Mobley then dunked off Peterson’s assist, and Agbonkpolo tossed in consecutive 3-pointers that stretched USC’s lead to 13 points.

The Beach followed with back-to-back baskets by Slater, including a 3-pointer, to make it 62-54. But Peterson answered with USC's ninth 3-pointer of the game, and the Beach were effectively done.

“They came out in the second half and we missed a couple of good looks,” Beach coach Dan Monson said. “Then it snowballed and they took control of the game. We kept fighting and we had an opportunity, but they were better than us when they needed to be.”

Long Beach State finished at 38% shooting, keeping intact USC's streak of holding every opponent this season to under 40%.

Long Beach State: The Beach fell to 0-2 against ranked teams, having lost to then-No. 2 UCLA 100-79 in their second game of the season.

USC: The Trojans have two big neutral-court games coming up against Georgia Tech and Oklahoma State before resuming Pac-12 play on Dec. 30. They're 5-0 on the road, with wins at Temple, Florida Gulf Coast and Washington State, as well as neutral-court victories against Saint Joseph's and San Diego State in Anaheim.

RILEY IN THE HOUSE

New USC football coach Lincoln Riley was introduced to raucous cheers just before halftime. He came on the court and told the title-starved fans what they wanted to hear: “We came here for one reason and that’s to win championships at USC.”

The Trojans were 4-8 overall and 3-6 in Pac-12 play during a season in which coach Clay Helton was fired in September and Donte Williams took over as interim.

“We know it’s going to take a lot of hard work,” Riley said. “We promise we’re going to do our part.”

Riley's presence, which was advertised in advance, helped USC draw its largest crowd of the season at 5,561. That's nearly 2,000 more than the average of 3,754 through the first four home games.

“It's awesome to have him here,” Peterson said.

Ellis turned 21 on Sunday. He missed his first four shots, making him 0 for 14 dating to Tuesday's win over Eastern Kentucky, but finished with eight points in front of family and friends. Reserve Boubacar Coulibaly from Mali celebrated his 22nd birthday, but didn’t get in the game.

Joshua Morgan, who played for the Beach in the teams’ last meeting in 2019, was scoreless in nine minutes.