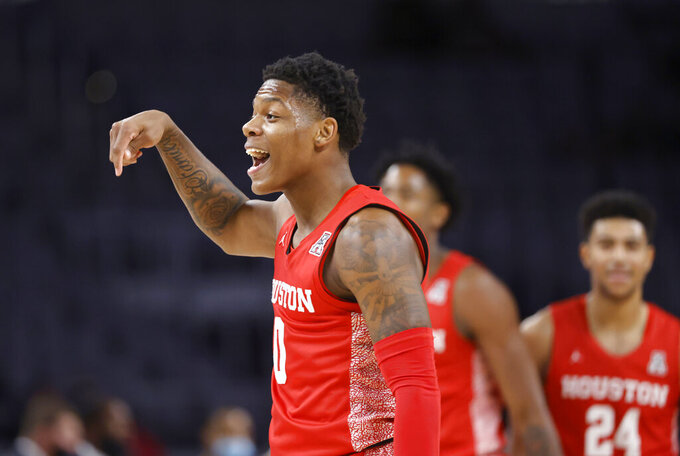 Houston guard Marcus Sasser (0) reacts after making a three-point shot against Texas Tech during the first half of an NCAA college basketball game, Sunday, Nov. 29, 2020, in Fort Worth, Texas. (AP Photo/Ron Jenkins)

FORT WORTH, Texas (AP) — Houston coach Kelvin Sampson heard the Texas Tech-heavy presence of a pandemic-limited crowd for the meeting of the old Southwest Conference foes on a supposedly neutral court in Texas.

The 17th-ranked Cougars still turned aside a rally after running out to a big lead against the No. 14 Red Raiders and coach Chris Beard.

Marcus Sasser scored 17 points playing close to home, Quentin Grimes added 15 and Houston never trailed in a 64-53 victory over Texas Tech on Sunday in a meeting of teams that went deep in the most recent NCAA Tournament in 2019.

Sasser, whose career high of 26 points came at SMU in Dallas as a freshman last season, was 5 of 15 from the field as the Cougars (3-0) overcame 35% shooting at Dickies Arena. That's where they are set to play in the American Athletic Conference tournament this season near downtown Fort Worth and not far from the Dallas suburb where Sasser grew up.

The crowd of 3,568 — about 25% of capacity at the year-old facility — was its loudest when the Red Raiders cut a 20-point deficit to seven in the second half.

A 3-pointer from Grimes opened the scoring and put the Red Raiders behind for the first time this season. Texas Tech (2-1) went six minutes without scoring in the first half and trailed by 18 just 12 minutes into the game.

Mac McClung scored 16 points but missed all six of his 3-point tries for the Red Raiders, who shot 22% from long range. Freshman Micah Peavy had 12 points.

Sasser put the Cougars up 53-33 with a 3 before the Red Raiders went an 11-0 run midway through the second half, the first nine points coming on free throws before a dunk by Peavy.

“Whenever you get punched in the mouth, you can sit around, you can make excuses or you can feel sorry for yourself,” Beard said. “Or you can get up and go back to work. I give our guys credit for that.”

Terrence Shannon Jr. cut Texas Tech's deficit back to nine with a steal and dunk before McClung's driving layup was blocked out of bounds by Brison Greshman, who was immediately called for a technical foul, apparently for taunting. McClung's free throws got the Red Raiders within seven.

Texas Tech had chances to get closer but couldn't convert before Houston regained control and kept the lead around 10 the rest of the way. The Cougars scored their last 11 points on free throws, going 11 of 14 from the line over the final 6:43.

“We had to make sure we got the ball past half court, run some clock, make sure we get the best shot possible even though it was coming down to the last second of the shot clock,” said Grimes, who had seven rebounds. “I felt like we did a good job of keeping our composure.”

Texas Tech: Marcus Santos-Silva, a grad transfer from VCU who had a double-double in each of his first two games with the Red Raiders, had four points and five rebounds. The other transfers had even less of an impact. Jamarius Burton (Wichita State) had six points, and Joel Ntambwe (UNLV) went scoreless in just five minutes.

Houston: The third straight neutral-site meeting between the former Southwest Conference opponents was the second consecutive victory for the Cougars after losing the previous nine times in the series. It was the first meeting between the schools in six years.

ALMA MATER IN THE FAMILY

Sasser's uncle Jason Sasser was the last Southwest Conference player of the year at Texas Tech in 1996. The elder Sasser averaged 19.5 points and 7.8 rebounds as the Red Raiders went 30-2 and lost in the Sweet 16 the season before joining the Big 12 along with Texas, Texas A&M and Baylor. The SWC disbanded.