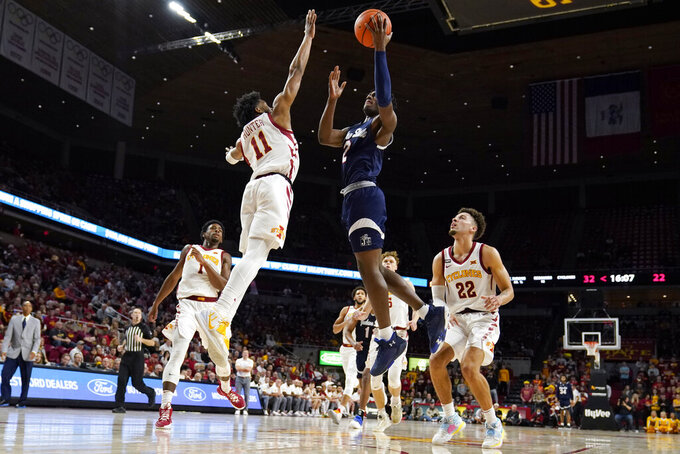 Otzelberger saw a difference in the Cyclones coming off their emotional 73-53 win over Iowa on Thursday.

“That certainly wasn’t the game offensively we hoped it would be. We’re not going to apologize or worry about the things we didn’t do offensively," he said. "I didn’t think we had the same hop in our step that we normally do.”

“We knew they were going to come out aggressive on defense. I think we did a pretty good job getting the ball into the paint. We just have to execute better from there," Kunc said.

The Cyclones went more than seven minutes without scoring in the second half and held a shaky 44-37 lead with 2 1/2 minutes left.

Kunc highlighted the run with a four-point play, hitting his free throw after swishing a 3 from the right wing.

Jackson State gradually pulled within 28-22 early in the second half, but Iowa State responded with a 9-0 run to push the margin to 37-22.

Iowa State has gone from an NCAA Tournament long shot to potentially a top 15 team in the rankings. The Cyclones began this weekend as one of six teams nationally to have multiple wins over ranked opponents, having beaten then-No. 25 Xavier and No. 9 Memphis.

Jackson State: The Tigers stay in the state to play at Northern Iowa on Tuesday and at Drake on Thursday.

Iowa State: This game was the first of what should be three consecutive tune-ups for the Cyclones, with Southeastern Louisiana (Dec. 19) and Chicago State (Dec. 21) upcoming. Iowa State opens Big 12 play Jan. 1 against No. 2 Baylor.