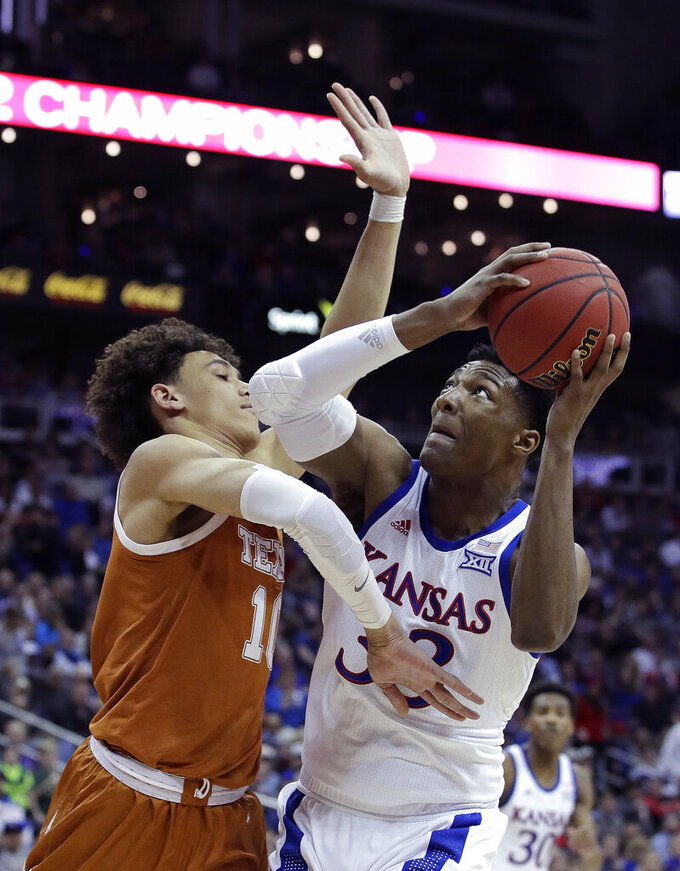 Kansas' David McCormack (33) looks to shoot under pressure from Texas' Jaxson Hayes during the first half of an NCAA college basketball game in the Big 12 men's tournament Thursday, March 14, 2019, in Kansas City, Mo. (AP Photo/Charlie Riedel) 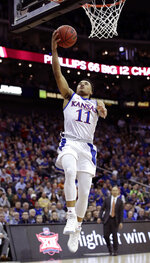 After the No. 17 Jayhawks failed to win a piece of the Big 12 regular-season title, ending their record streak of 14 straight crowns, they leaned on freshmen Devon Dotson and David McCormack in a 65-57 victory over the Longhorns in the quarterfinals of the conference tournament.

Two more wins and they'll hoist some hardware after all.

Dotson finished with 17 points and McCormack had 13 points and a career-best nine rebounds for the third-seeded Jayhawks (24-8), who advanced to play West Virginia in the semifinals Friday night.

The No. 10 seed Mountaineers upset second-seeded Texas Tech earlier in the day.

"The team I watched tonight is hungry, they're playing with a free mind and they're rebounding," Jayhawks coach Bill Self said of the Mountaineers. "Forget about the records and whatnot, when Kansas and West Virginia play you usually get your money's worth for a game."

Dedric Lawson also had 16 points and Quentin Grimes had 12 for the Jayhawks, who improved to 20-3 in quarterfinals since the inaugural tournament in 1997.

Dylan Osetkowski had 18 points to lead the sixth-seeded Longhorns (16-16), who may have needed a win at the Sprint Center to help their NCAA Tournament resume. They have a strong strength of schedule but have lost five of their last six games overall.

"No question about it, regardless of our record," Osetkowski said. "We've been in every game. It's tough to leave it up to the committee now, but I think we've definitely done enough."

The Jayhawks and Longhorns split in the regular season with each winning at home, so perhaps it was no surprise that they played to a 29-29 stalemate in the first half.

Kansas got out to a quick 9-2 lead but languished through long periods, unable to get anything going offensively. The Longhorns did their best work attacking the paint and getting to the foul line, even though 6-foot-11 freshman Jaxson Hayes sat most of the half with two fouls.

The Jayhawks began to edge ahead early in the second half.

Lawson scored a couple of quick baskets to build a lead, and the brutish, 6-foot-10 McCormack went to work on the glass. He made one nifty rebound off a miss by Ochai Agbaji and spun around for a lay-in, helping Kansas stretch its lead to the biggest of the game.

"I was trying to use my size and strength to my advantage," McCormack said.

Texas tinkered with a 2-3 zone and a half-court trap to slow the Jayhawks, and to some extent they succeeded. But the Longhorns were unable to capitalize at the other end.

"We were locked in and played great defensively," the Jayhawks' Marcus Garrett said.

When they closed to within 56-51, Grimes drew a foul and triggered the bonus, making both free throws. When the Longhorns added a foul shot of their own, Dotson breezed to the bucket for another contested layup to extend the Jayhawks' lead.

The Jayhawks held on the rest of the way.

"We got some stops, but we didn't score enough points," Texas coach Shaka Smart said. "I think the difference in transition baskets was one of the key factors that led to Kansas winning the game."

Kerwin Roach II returned from a five-game suspension for violating team rules. He checked in early in the game but finished with just eight points on 2-for-7 shooting.

The Longhorns lost Hayes, one of their bright young stars, when he appeared to hurt his left knee during a scrum with 1:58 left in the game. He was helped off without putting any weight on it.

Texas had the nation's sixth-toughest scheduled according to the NET, the new analytics used by the NCAA Tournament selection committee. But the Longhorns were just 8-10 in the Big 12 in the regular season, and they may have needed a win over Kansas to help their postseason cause.

Kansas started 15-2 but was just 8-6 down the stretch, when injuries and absences began to wreak havoc with the lineup. But the emergence of McCormack gives the Jayhawks hope they can defend their tournament title after failing to win the regular-season crown.

Kansas will play the Mountaineers for a spot in the finals.