No. 17 Oklahoma State completes sweep of No. 16 Oklahoma 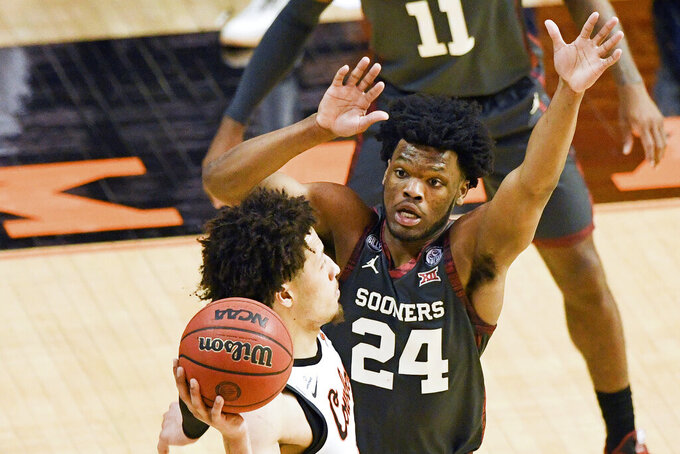 He's not coming back — he was introduced with the seniors and is projected by many to be the top pick in this year’s NBA draft. And when the game was on the line, it was easy to see why he's on his way out. Cunningham scored 13 of his 15 points in the final 10 minutes to help the 17th-ranked Cowboys defeat No. 16 Oklahoma 79-75.

Cunningham had 40 points in Saturday's 94-90 overtime win at Oklahoma. This time, the 6-foot-8 point guard was a decoy much of the night but finished strong.

“Cade just takes the pressure off the rest of us," Oklahoma State guard Bryce Williams said. "He’s got so much pressure on him, but it’s not really pressure to him. He can handle the situation. But he’s got a team behind him that can back him up every day.”

Kalib Boone had 17 points and nine rebounds, and Williams scored 14 for the Cowboys (17-6, 10-6 Big 12), who won their fifth straight game overall and earned their third consecutive win over a ranked opponent.

“The main message is keep fighting, stay mentally locked in and just honestly listen to coach Krug (Lon Kruger)," Reaves said. "That’s really the main thing, and that’s what we will get back and do.”

Oklahoma led 36-35 at halftime behind Manek's 16 points. Cunningham had two points, no field goals and just two shot attempts in the first half.

Reaves got hot in the second half. He threw down a nasty two-handed dunk in traffic to put the Sooners up 61-57.

Cunningham's first field goal was a layup with just over seven minutes remaining. He made another layup 30 seconds later, then the Cowboys worked the ball around to Williams, whose 3-pointer put them up 66-64.

Oklahoma State led by five in the final minute before Reaves scored on a wild putback that looked like something out of a schoolyard game. He rebounded the ball off the floor with his right hand, then in a single motion banked it in while falling to the floor. He was fouled, and his free throw with 7 seconds left cut Oklahoma State's lead to 77-75.

“I still can't believe he made that last shot he made,” Boynton said. “I have no idea how he did it.”

Cunningham was fouled with 6.3 seconds to play, and he made both free throws to put the game out of reach.

Cunningham went just 3 of 8 from the field, yet the Cowboys shot 53% overall and 59% in the second half.

“He’s a great player," Williams said. "Not to take nothing from my guy, but we’re a great team at the end of the day. We’ve got all the pieces. We have all the finishers, all the playmakers, all the shooters. We feel like we can play with whoever.”

Oklahoma: The Sooners are safely in the NCAA Tournament field, but their seed is slipping. They are losing some of the close games they won earlier in the season.

Oklahoma State: The Cowboys are rising quickly and gaining confidence. They showed they could take advantage of the attention on Cunningham, then close the deal.

Williams on the fans from both schools: “It’s a rivalry, so the fans — we were in warmups and the fans was trying to fight each other getting to the seats. So it’s like, yeah, from the jump all the way to the end, they’re booing, they’re mad, they’re happy. You’ve got everything."

Oklahoma hosts No. 15 Texas on Thursday.

Oklahoma State visits No. 3 Baylor on Thursday, then plays at No. 6 West Virginia on Saturday.