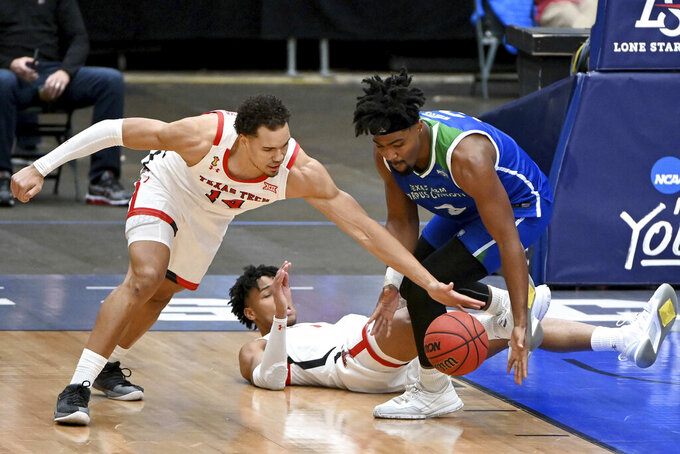 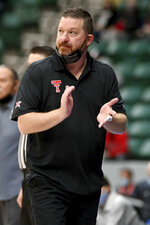 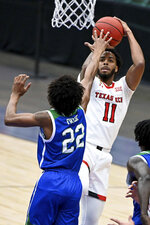 FRISCO, Texas (AP) — Texas Tech's Chris Beard liked what he saw a little better than the previous game, and the previous trip to the Dallas area for the Red Raiders.

The fifth-year coach just didn't realize the milestone that came with the victory.

Terrence Shannon Jr. scored 15 points in his return from an ankle injury and No. 17 Texas Tech beat Texas A&M-Corpus Christi 77-57 on Saturday for Beard’s 100th win with the Red Raiders.

“I didn’t even know that until after the game, we were on the floor and they put my picture up there,” Beard said. “I just look back at the players. That’s what I told the guys. It just means you have good players.”

Beard is 100-45 in his fifth season with Texas Tech, which made the school’s first trip to the national championship game in the most recent NCAA Tournament in 2019. Virginia won the title in overtime. Beard, who was an assistant under Hall of Fame coach Bob Knight for the Red Raiders more than a decade ago, also led them to the Elite Eight in 2018.

Freshman Micah Peavy and graduate transfer Marcus Santos-Silva scored 12 points apiece for the Red Raiders (6-1), who never trailed after finding themselves behind with eight minutes to go before avoiding a major upset in their previous game against Abilene Christian.

The game at the home of the Dallas Mavericks’ G League team was the second neutral-site meeting in the Dallas area in two weeks for the Red Raiders. They lost to No. 7 Houston 64-53 in a Top 25 matchup in Fort Worth. It was Texas Tech’s final tune-up before its Big 12 opener against No. 5 Kansas on Thursday.

“I liked a lot of things,” Beard said. “We get three guys in double figures. We’re getting balance. We’re one of the highest assist teams in the country. I think our offense has shown some diversity.”

Nolan Bertain scored 12 points and Simeon Fryer added 10 for the Islanders (1-5), who lost their fifth straight since winning their opener against Texas A&M International.

Texas A&M-Corpus Christi committed turnovers on its first four possessions and had another seven in a row later in the first half to fuel an 11-0 run for Texas Tech after the Islanders had closed to 16-11. A&M-Corpus Christi finished with 20 turnovers.

The Red Raiders, sixth nationally in scoring defense coming in, also forced two shot-clock violations early in the first half. They have held opponents under 60 points in all six victories.

“Before the game, we talked about defense and how aggressive we were at the end of the Abilene Christian game,” Shannon said. “We just said we were going to go out and be aggressive.”

Shannon, a sophomore who injured an ankle against Grambling State and missed the ACU game, had seven rebounds while making five of six free throws. Kyler Edwards scored all nine of his points in the first half.

Texas Tech: Mac McClung, the team's leading scorer, had a third consecutive rough game offensively, scoring five points on 2-of-10 shooting. But the Georgetown transfer had a hand in getting the Red Raiders going in the first half.

After a nifty spin move, McClung made a no-look pass to Marcus Santos-Silva for an assist, and later tracked down a loose ball on a turnover, flipping the ball blindly over his head down the floor from behind midcourt to set up an easy layup for Peavy. McClung finished with a season-high six assists to go along with four rebounds and three steals.

“He hasn’t gotten too high or too low,” Beard said. “He’s had some great success, 20-point game on opening night on nine shots and then there’s some nights where the ball doesn’t go in. You’re putting a complete game out there.”

While forcing at least 20 turnovers for the fourth consecutive game, the Red Raiders had just four turnovers and outscored A&M-Corpus Christi 21-3 on points off turnovers.

“Heading into the Big 12 next week, that was definitely kind of the highlight of the game is to be able to take care of the basketball,” Beard said. “It wasn’t like we were playing against some kind of defense where that was easy. Corpus pressures the ball. They changed up their defense. They have some quick guys on the perimeter.”

Texas Tech: The Red Raiders get the Jayhawks at home Thursday before traveling to Oklahoma on Dec. 22.