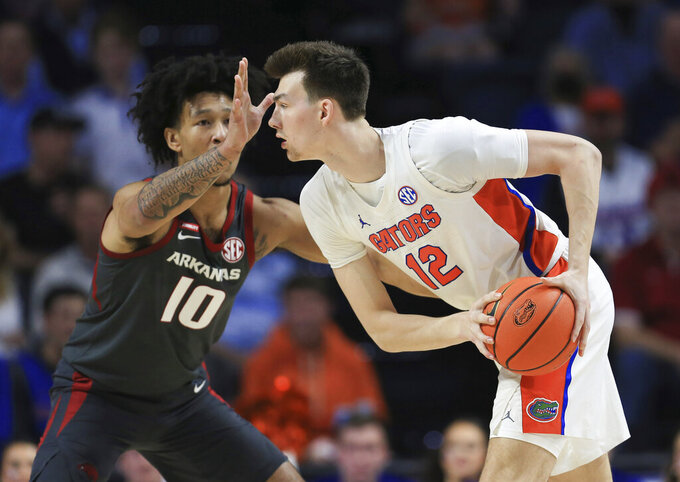 GAINESVILLE, Fla. (AP) — Nolan Richardson, Corliss Williamson and Scotty Thurman were on the floor for Arkansas' last victory at Florida. The Razorbacks had made 14 consecutive trips to Gainesville since without tasting another one.

It was a losing skid coach Eric Musselman didn't talk about before the game. But he certainly made it a point of emphasis afterward.

JD Notae scored 22 points, including a side-step 3 with a little more than minute remaining, and the No. 18 Razorbacks beat Florida 82-74 on Tuesday night for their first victory in the O'Connell Center since 1995. It was Arkansas' 12th win in its last 13 games.

“It feels good knowing this team made history again," said Davonte Davis, who added 19 points, six rebounds and four assists. "I think as the season goes on, as people continue to doubt us, we’ll continue to prove everybody wrong. This team’s amazing, and I’m glad we came in here and broke that streak.”

Notae's 3-point shot down the stretch was the difference. It's one he uses often and even practices daily. It might not seem like an ideal shot with the game on the line, but it was well timed and perfectly executed against the Gators.

“The thing that makes him so dangerous to guard is he shoots from anywhere, he's like Steph Curry in the fact that those guys shoot from wherever, whenever," Musselman said. "You think they’re absurd shots and they go in and they stretch the defense out and he really puts pressure on defensive teams because I never know when he’s going to shoot so I don’t know how the heck they’d ever know when he’s going to shoot.

"I have no idea half the time when he pulls (up), but I do want the ball in his hands.”

Notae chipped in six rebounds, three assists and two blocks. Jaylin Williams finished with 15 points and 10 boards — his 14th double-double of the season and fifth straight — despite spending much of the second half in foul trouble.

The trio of Notae, Davis and Williams combined to score 32 of Arkansas' 45 points in the second half as the Razorbacks (22-6, 11-4 Southeastern Conference) remained the hottest team in the league.

Colin Castleton led the Gators (17-11, 7-8) with a career-high 29 points. His layup made it a one-point game, with Florida trailing 72-71 with 1:26 remaining. But Notae hit a huge 3 on other end to give Arkansas some breathing room. He followed with a pair of free throws.

Arkansas outscored Florida 10-3 to end the game. The Gators missed eight of their final 10 shots.

Florida, coming off a huge home win against then-No. 2 Auburn, hit its first four 3-pointers in the opening 4 minutes and looked like it might coast to back-to-back victories against ranked SEC teams for the first time February 2001.

But the Razorbacks showed why they've become one of the SEC's most feared teams. They used a 14-2 run to overcome an early deficit and then went toe-to-toe the rest of the night until Notae delivered the knockout blow.

“Arkansas is a really good team,” Florida coach Mike White said. “They got a chance to do some special things down the stretch.”

Arkansas will get a chance to move into the top 15, maybe even higher, in the next AP college basketball poll when it hosts No. 6 Kentucky next.

Musselman, who had shoulder surgery in January to repair tendon damage, had it wrapped in ice after the game and said he has to coach once more in a sling before being fully cleared.

Arkansas: The Razorbacks have improved 70 spots in the NET ranking since a three-game losing streak in early January, putting them in line for another high seed in the NCAA Tournament. They were a No. 3 seed last year and currently rank 23rd in the all-important NET. They should move up a few more spots following another win.

Florida: The Gators lost for the third time in four games, putting their NCAA Tournament hopes in jeopardy. They haven’t missed the tourney since 2016, the longest current streak in the SEC.

Arkansas hosts No. 6 Kentucky on Saturday at Bud Walton Arena, where the Razorbacks have won seven straight.

Florida plays at Georgia on Saturday. The Gators have won five straight in the series and 28 of the last 35.