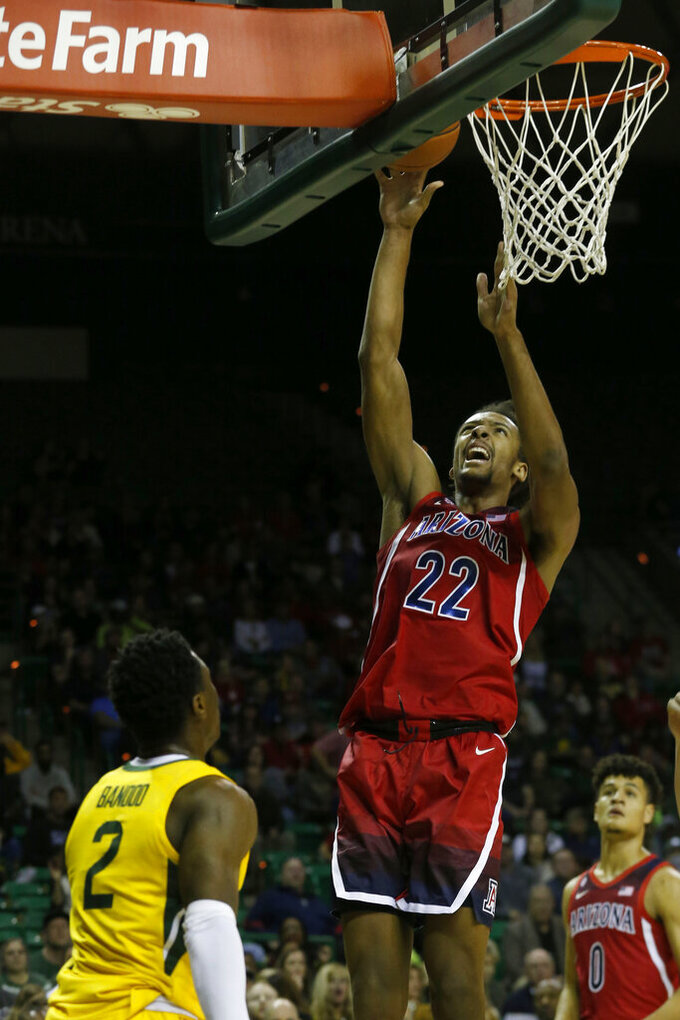 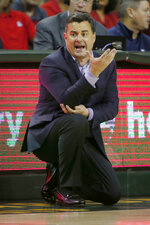 WACO, Texas (AP) — MaCio Teague heard the crowd with No. 18 Baylor at home and tipping off about the same time the Bears' football team started the Big 12 championship game 100 miles north of campus.

It wasn't hard for the sophomore guard to figure out which squad many of those fans were there to watch: 12th-ranked Arizona.

“It felt like a road game,” Teague said after scoring 19 points in the Bears' 63-58 victory Saturday. “Especially when they did the, ‘U of, U of A,’ whatever they were doing. I heard it. It was pretty loud in there.”

Freddie Gillespie had 17 points and 13 rebounds as the Bears handed the Wildcats their first loss.

Admission was free at Baylor's campus arena because of the Big 12 title game against Oklahoma at the home of the Dallas Cowboys.

It was supposed to be the first true road game for the Wildcats (9-1), but their fans might have outnumbered the Baylor contingent. As Teague heard, they loudly chanted “U of A” before the Baylor introductions but had a hard time getting into the game early, with Arizona giving up a 15-0 run and shooting 33 percent in the first half.

The Wildcats, whose 52-game home winning streak was stopped by Baylor last December, did enough to stay close despite shooting 27% and had the fans chanting several times in the second half.

Arizona finally got the deficit under six by scoring five points on one possession to get within 57-56 with less than two minutes remaining. Jemarl Baker Jr. hit a 3 as a foul was called and Zeke Nnaji made both free throws.

Teague, who was 9 of 10 on free throws, made a pair at the other end, then blocked a 3-point attempt by Nico Mannion, who led the Wildcats with 15 points. Leading by four, Baylor got another block from Gillespie in the final minute.

Nnaji scored 12 for Arizona, which made just two of 18 3-pointers after coming in sixth in the nation at 43% shooting from long range. The last miss came from Josh Green with a chance to tie in the final seconds.

“We hung in there," Arizona coach Sean Miller said. "To have an opportunity late in the game ... that’s what you really hope can happen on the road. It was just bizarre how we got to that point because it certainly wasn’t because of our offense.

The Bears (7-1) started hot in the fourth-ever Top 25 matchup in Waco but cooled off as well. Baylor shot 30% while the Wildcats, who came in fourth in the nation in scoring at 87.1 points per game, finished 18 points shy of their previous season low.

Baylor wasn't too far behind Arizona in 3-point shooting coming in, ranked 25th at 39.6% before going 6 of 24 from long range.

“We couldn’t buy many from deep and they couldn’t either,” coach Scott Drew said. “I credit the defense for really making it tough. When you got the looks, you weren’t in a rhythm.”

Arizona: The Wildcats didn't play well in their first real test this season, and first true road game against ranked team since beating rival Arizona State 77-70 in February 2018. Arizona won't have to wait long for the next one. No. 9 Gonzaga visits next Saturday.

Baylor: The Bears took control early without a lot of help from Jared Butler, third in the Big 12 in scoring coming in. The sophomore guard didn't score until after the 15-0 run that put Baylor up 22-8 and finished with 13 points.

One of the loudest noises from Baylor fans came when Oklahoma broke up a potential touchdown pass with the game showing on the video boards above the court during breaks in the action.

“Difficult circumstances for Baylor, but I thought they did the best job that they could,” Miller said.

FREEBIES FOR PLAYERS, TOO

The Wildcats stayed close by making free throws. Mannion was 8 of 8 and Chase Jeter matched Teague by going 9 of 10 and scoring 11 points. Arizona was 28 of 34 from the line to 23 of 28 for Baylor.